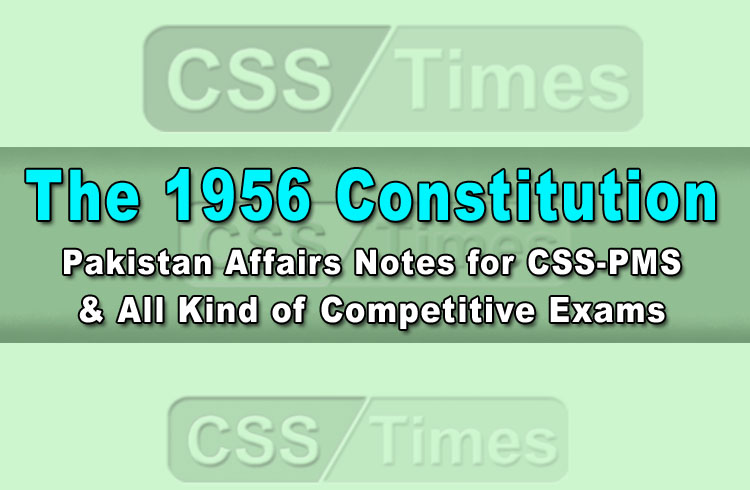 The Constitution of 1956 was passed after long deliberations. It replaced the Interim Constitution. It has 234 Articles and 6 Schedules. It declared that the name of the country would be the Islamic Republic of Pakistan.

There was clear impact of the Government of India Act, 1935 and the Interim Constitution.

Executive Authority vested in the President who exercised it on the advice of the Prime Minister except in the matters he had discretion.

The President would be of 45 years of age, Muslim and qualified to be a member of National Assembly.

He was to be elected by National Assembly (NA) and Provincial Assemblies.

PM would be appointed by President. President could not remove him unless he was sure that PM did not enjoy the support of majority in the National Assembly. The President would be its sole judge. He could ask PM to show his support. Cabinet was collectively responsible to NA. PM was the head of government assisted by cabinet.

National Assembly was the only house of the parliament having a membership of 300 plus10 women seats. Principle of parity was observed for representation.

Method of direct elections was adopted for general seats. All legislative powers were rested with NA.

Regarding monetary bills of ordinary expenditure NA had all powers but they could not vote on Consolidated Fund List. Salaries of President, judges, federal service commission, etc. were to be paid through Consolidated Fund.

NA could control the Executive.

The constitution provided three lists: Federal, Provincial and Concurrent. There were two Provinces in the federation of Pakistan.

At the provincial level there was elected Assembly. The Parliamentary System under the nominal headship of Governor. The real powers were given to Chief Ministers and his cabinet. Centre had some overriding powers and some Emergency powers too. They were Clause 191: Security or economic life was under threat for external or internal reasons. Clause 193: Constitutional crisis in provinces.

At centre level the highest court was Supreme Court, then High Courts in provinces and subordinate courts were established.

Higher Courts have the power of Interpretation of the constitution. They could hear the disputes between governments. They were guardians of the Legal rights of the citizens.

Civil and Political Rights were given to the people of Pakistan but they could be suspended in case of emergency.

Principles of Objectives Resolution were included as preamble. The other principles included surety about Islamic practices, Welfare of people, non-discrimination, and fulfillment of basic needs, etc.

Working of the Constitution