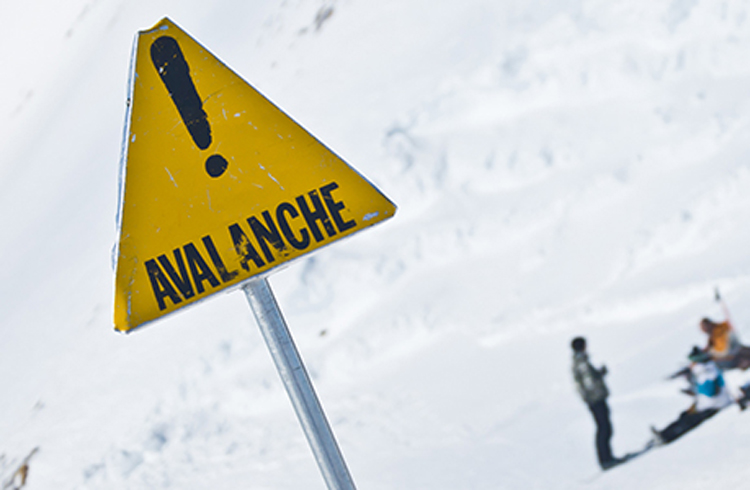 What is An Avalanche?

The word avalanche is derived from the French word avalance meaning descent. An avalanche is a mass of snow, often mixed with ice and debris which travels down mountain sides, destroying all in its path.

To help in understanding of avalanches, they have been classified into four types.

First of these are the Loose Snow Avalanches. They are common on steep slopes and are seen after a fresh snowfall. Since the snow does not have time to settle down fully or has been made loose by sunlight, the snow-pack is not very solid. Such avalanches have a single point of origin, from where they widen as they travel down the slope.

Loose Snow Avalanches in turn could cause a Slab Avalanche, which are characterized by a the fall of a large block of ice down the slopes. Thin slabs cause fairly small amounts of damage, while the thick ones are responsible for many fatalities.

Powder Snow Avalanches are a mix of the other forms, Loose Snow and Slab. The bottom half of this avalanche consists of a slab or a dense concentration of snow, ice and air. Above this is a cloud of powdered snow, which can snowball into a larger avalanche as it progresses down the slope. The speed attained by this avalanche can cross 190 miles per hour and they can cross large distances.

Finally, there are Wet Snow Avalanches. These are quite dangerous as they travel slowly due to friction, which collects debris from the path fairly easily. The avalanche comprises of water and snow at the beginning, but understanding of avalanches has showed us that it can pick up speed with ease.

There is no one reason behind the development of avalanches. It was believed for long that the echo of a human voice in the mountains could dislodge enough snow to start one. Similarly, a person’s weight can cause a avalanche too. The sudden addition of weight can fracture a weak area of snow. However, scientific understanding of avalanches shows us that there are many environmental factors at work.

Heavy snowstorms are more likely to cause Avalanches. The 24 hours after a storm are considered to be the most critical. Wind normally blows from one side of the slope of mountain to another side. While blowing up, it will scour snow off the surface which can overhang a mountain.

Heavy snowfall is the first, since it deposits snow in unstable areas and puts pressure on the snow-pack. Precipitation during the summer months is the leading cause of wet snow avalanches.

Humans have contributed to the start of many avalanches in recent years. Winter sports that require steep slopes often put pressure on the snow-pack which it cannot deal. Combined with the heavy deforestation and soil erosion in mountain regions, it gives the snow little stability in the winter months. Further natural causes include earthquakes and tremors, since they can often create cracks in the snow-pack.

The use of All Terrain Vehicles and Snowmobiles creates vibrations within the snow that it cannot withstand. Coupled with the gravitational pull, it is one of the quickest ways to cause an avalanche. The other is construction work done with explosives, which tend to weaken the entire surrounding area.

There are conditions where snow is already on the mountains and has turned into ice. Then, fresh snow falls on top which can easily slide down.

Layers of snow build up and and slide down the mountain at a faster rate as steep slopes can increase the speed of snow. A rock or piece of huge ice can shake the snow and cause it to come down.

Warm temperatures that can last several hours a day can weaken some of the upper layers of snow and cause it to slide down.

As such, there is little damage to the overall ecological system due to avalanches. They are a part of nature and have been happening for thousands of years. However, they are a major natural hazard for the local human population.

1) Damage to Life and Property:

A large number of casualties takes place after avalanches hit heavily populated areas. Infrastructure is damaged and the blockage caused, impacts the livelihood of many. People who enjoy skiing, snowboarding and snowmobiling are at a greater risk of losing their lives. A powerful avalanche can even destroy buildings and power supplies can be cut off.

When an avalanche occurs, it brings down all the debris with it and can cause havoc in low lying areas. Flash floods are seen to happen after avalanches, which is a long term problem many villagers and townspeople have to deal with. They can also change weather patterns and cause crop failure in farms present on the lower fields.

An avalanche can block anything in its path and even restrict the normal movement of traffic. Various ski resorts depend on tourists to run their business successfully. Ski resorts and other businesses are forced to close until the avalanche decreases and weather conditions become suitable.

The Cascade Range, Washington is the worst avalanche disaster in the USA to date. Three snow-bound trains were swept into a canyon which killed 118 people.

On April 7, 2012, an avalanche, occurring in the disputed Siachen region of Indo-Pakistan, claimed 138 victims. These included soldiers and civilian employees alike of the Northern Light Battalion at the Gayatri Military Base, Ghanche, Pakistan. This incident drew the attention of the governments of both India and Pakistan to resolve the Siachen dispute, which, since 1984, had led to the deaths of a large number of soldiers from both sides. These deaths were also primarily due to the harsh climatic conditions prevailing in the region.

The worst natural disaster in the history of Peru occurred on May 31, 1970, and is known as the Ancash Earthquake, or the Great Peruvian Earthquake. The earthquake triggered an avalanche that alone claimed the lives of almost 20,000 people, making it the deadliest avalanche in the recorded history of humankind. The epicenter of the earthquake was located 21 miles off the coast of Peru in the Pacific Ocean, and the Peruvian regions of Ancash and La Libertad were the worst affected in this disaster. A massive avalanche struck the towns of Yungay and Ranrahirca when the earthquake destabilized the northern walls of Mount Huascarán. A large chunk of ice and snow, 910 meters wide and 1.6 kilometers long, sped down the mountain at speeds of 280 to 335 kilometers per hour. As it moved, it completely devastated all that came in its path, with its massive volumes of ice, water, mud, and rock alike.

This avalanche occurred when 300,000 cubic metres of snow slid down a 30 degree slope which reached a speed of 60 miles an hour. Chalets were covered in 100,000 tons of snow, killing 12 people.

During World War I approximately 50,000 soldiers died due to avalanches at the Austrian-Italian front in the Alps. It is thought the avalanches were caused by the artillery fire.