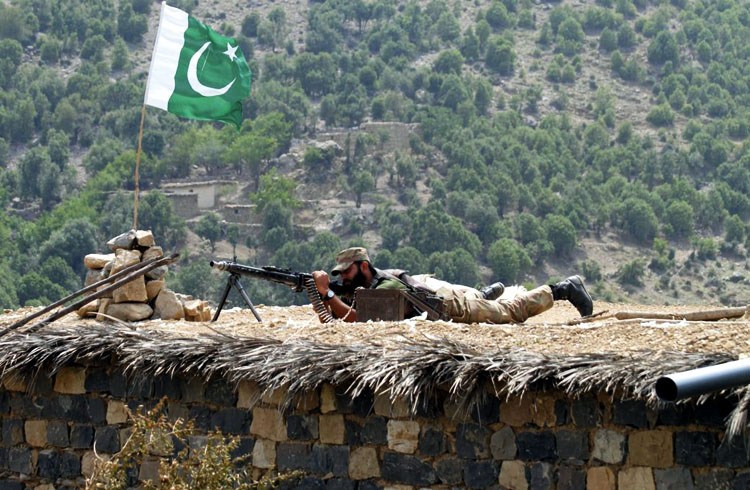 Q.8. Critically evaluate the counter terrorism policy of Pakistan and suggest measures to eradicate this evil.

The security operation restored the confidence of the global community in the capacity of the Pakistan military to deal effectively with terrorism. This was the main reason that the army chief received extraordinary attention during his visits to the US, the UK and China. This also contributed to changing the security-related interaction between Pakistan’s security establishment and the new Afghan government led by President Ashraf Ghani. These two countries are now involved in a more active cooperative interaction for dealing with security matters, especially counter terrorism.

The civilian federal and provincial governments vowed repeatedly to implement the 20-point National Action Plan. Some actions were taken by these governments in the immediate aftermath of the plan’s adoption. However, with the passage of time, the civilian enthusiasm for countering terrorism began to decline. The old fault lines based on ethnic, regional and religious-sectarian have resurfaced and the supporters of militancy are again becoming active. All this makes it difficult for the ruling PML-N to adopt a forthright approach on implementing the 20-point agenda. Its electoral support overlaps with Islamic conservatives and militant groups.

The military courts have so far not started working; the federal government has not committed any case to them. As a section of lawyers have filed petitions in the Supreme Court for nullifying the 21stAmendment and some religious parties have taken exception to the focus of military trials on religion-linked terrorism, the federal government has adopted a go-slow policy on military courts.

The Punjab government has arrested a number of religious leaders on account of misuse of loudspeaker rules and for making objectionable speeches. It has also banned the sale of religion-oriented books that are said to promote negative attitudes or hatred against different sects. A number of people have been taken into custody for anti-social activities or for their linkages with sectarian and violent organisations. Most of these arrests have been done on the basis of the lists of such people maintained by police stations. Some activists of religious groups are taking exception to the arrests of religious leaders for misuse of loudspeakers and the restrictions on the sale of religious literature with strong sectarian bias. Some columns in Urdu language newspapers have criticised the banning of religious-sectarian books by well-known authors.

While Pakistan’s policy on countering terrorism has been remain focused on using all possible means hard and soft power, counter terrorism strategy is based on three pronged approach, famously known as 3-Ds approach of Deterrence, Development and Dialogue. The Deterrence emphasizes upon the enhancement of security measures that could possibly deter the terrorists from using the terror tactics. Pakistan believes that effective measures should be adopted to prevent the extensive aims of terrorists. The next step is to develop the society and address the issues that lead to extremism. It is proven fact that societies that are deprived of their basic rights are more determined to use the violent means to achieve their objectives. The basic need in development is development of education and justice to every one and all despite of their culture and religion.

The first and foremost things are the unity and commitment. These are very important to achieve an objective. All stakeholders of the society must need to unite and become committed to this one agenda…….to eradicate terrorism from every nook and corner of the country. But after a very bloody war, we still see some of the stakeholders of the society who are supporting the extremist designs of the terrorist groups. I do not clearly know what their intensions are. But one thing is very clear: that is they are working against country’s betterment. We need to bring back first these people on the right direction using the process of dialogue.

2. “No” to all Sort of Terrorist Activities

Parliamentarian can play a very constructive role in this regard. They can use their influence in the right direction to convince the people of their constituencies to say “No to all sort of terrorist activities”. They can easily inculcate in the minds of people the vision of free terrorist society and about progressive and emerging Pakistan. But it is also a fact that we still did not see any useful role from these so-called representatives of the people. It is high time they must come forward to save the future of Pakistan.

Religious leaders in any society can play an effective role in times of crises. But the case of Pakistan is different regarding war on terror. These influential leaders were in some respect close to the terrorist organizations and to their self-professed ideology in the past. But it is the requirement of time that these leaders must come forward to use their influence in the society against all type of terrorism. They can play their effective role using mosques, speeches and writings to guide the ignorant masses of the country. There is still a large section of the society in Pakistan who prefers to listen these religious leaders at any cost. So why we are not utilizing the influence and potentials of these leaders in true sense?

Civil society is another major stakeholder. It is not playing their due role against war on terror. The close observation of this modern world demands that in time of crises civil society must come to the forefront to help the state machinery. But in Pakistan it is still a missing area (war on terror) of civil society. A mass movement is required to defeat the ideologies of terrorist organizations. And civil society can lead this mass movement very effectively. But this should be a collaborative effort from all stakeholders of the society. Because working alone against this big threat….terrorism can’t bring the desired results as required.

Education is another very important way to eradicate the root causes of terrorism. The first step should be to provide uniform system of education to the masses. This system of education must be free from prejudices and sectarian violence. It also includes both religious and modern education at equal ratios. This will help create citizens having a balanced approach towards life. Although it is a very lengthy process but it is very important. Because we need to clear the minds of young generation about the extreme designs of terrorist organizations. (A few days ago a renowned professor has given a lecture on topic related to terrorism in a university. In question-answer session when he was asked about who is responsible for terrorism in Pakistan. He refused to give any comments on this question). So this attitude must be stopped right now.

Good governance is another area which needed more attention in this regard. The important work in this regard which has been done so far is only to equip security personnel’s with latest weapons and to increase their salaries, and compensation in case of casualties. But Policy makers of Pakistan (after entering into the dangerous war on terror) did not create a suitable mechanism through which terrorism can effectively be checked. For example, there is no clear data of people residing in the country. There is no check and balance on foreigner’s activities in the country. There is no effective way to check cross border terrorism from Afghanistan and Indian side. There is not sufficient training mechanism for security personnel’s to counter terrorist organizations plots. There is still time our intelligence and law and order agencies can start door to door campaign for checking and registration, and to monitor it effectively. Also institutional working should be done according to rules and regulations. This will give a sense to the citizens of the country that Pakistan’s future largely depends on good governance, and ultimately they will participate in this process.