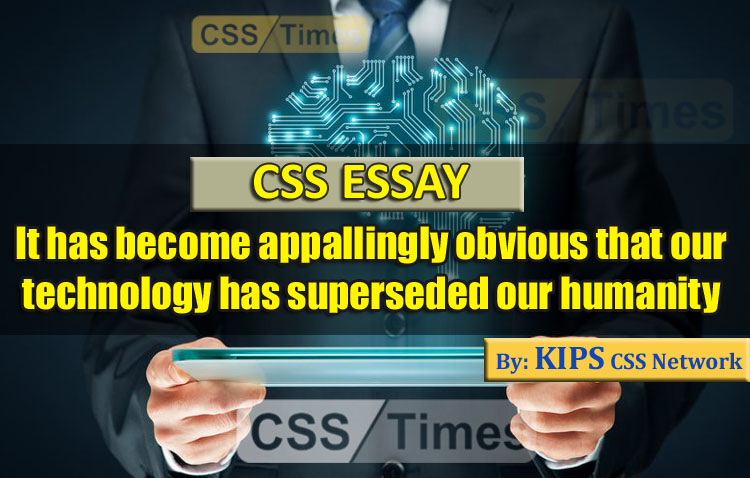 Essay Outline: It has become appallingly obvious that our technology has superseded our humanity

1. Introduction
a. Deciphering the key terms
b. How technology has superseded humanity

5. How can technology be made to augment humanity
a. By keeping technology subservient to man
b. By utilizing technology for alleviation of human suffering
c. Moral and ethical checks on technological advancement

“Our scientific power has outrun our spiritual power; we have guided missiles and misguided souls”  Martin Luther King Jr.

Technological advancement, over the last few decades has taken huge strides, but alas! Not always for good. Modern-day man has learned to fly like birds, to be fast like robots, to be efficient like machines but regrettably has forgotten how to live like a man. Scientific advancements in the fields of communication, computers, artificial intelligence (AI), technological warfare and cybernetics has made man into a slave of technology. Growing dependence on technology has imbedded in him callousness, inactivity, insensitivity and has effectively taken away “humanness” of human beings. In subsequent paragraphs objective analysis of facts shall be conducted to prove the veracity of this claim.

While contemplating over the daunting question “how” technology has exceeded our humanity, the first thing that pops up in mind is that machines are becoming more ‘intelligent’ with their great computational power. This takes toll of human capabilities; his growing reliance on machine to carry out basic operations of intelligence erodes human capacity to do them, eventually. For instance, with advent of internet and smart phones, one seldom makes an effort to remember contact numbers, one hardly ever do two-three digit calculations without use of calculators. A research study in Japan revealed that young Japanese are increasingly relying on technology to write their language with pre-stored alphabets and consequently do not require or learn the alphabets, manually. Futuristic outlook further reveals that this trend is going to get stronger in coming times.

Read Also: CSS Essay: Emergence of Street Power and its Challenges to Democracy in Pakistan

Over the past few decades, many experts have suggested that future of humankind is ‘Robotic’. With the rise of ‘Artificial intelligence’ on the technological arena, this claim does no more look like too idealistic. Artificial intelligence refers to machines which are technologically so advanced that they can carry out functions of human brain. They can make decisions based on the information already fed. They can compare and contrast. They can make calculated assumptions and can even predict future on the basis of information provided. Application of artificial intelligence has already penetrated our lives. Face recognition device which once appeared to be just a science fiction is very much a reality now. Global positioning system (GPS) technology is another household name which is a miracle of technological advancement in realm of ‘Intelligent machines’.

In addition to that, artificial intelligence is said to the next thing which wills penetrate into personal domain of our lives in times to come. It is believed that within decades ‘Robot house maid’ will be the new rage. However, application of artificial intelligence is not as harmless as it might have us believe. There are certain moral and ethical repercussions of that too. Many researches collaborate the view that is higher level decision making will be left to machines; they can severely challenge human beings. Some firms have even gone as far to launch ‘Robot lovers’ for erogenous gratification, this leads to serious moral questions. This kind of innovations could lead to breakdown of basic unit of human society i.e family and eventually would lead to detrimental and deleterious effects for humanity.

Reliance on machines has great social implications as discussed earlier. It has made way into field of medicine too; where it is evident now-a-days that patient care is often left to technology with minimal human interaction of patient and medical staff, thus ignoring the emotional aspect of healing. This view point finds empirical justification in the experiment of socio-psychologist Albert Bandura. He fed a group of infant monkeys with bottles attached to wired dolls for a specific time, baby monkeys showed no signs of attachment. However, when the same bottles were attached to stuffed surrogates, who provided them warmth, too they readily showed feelings of attachment and affection towards them thus validating power of interaction and tender touch. Psychology stresses on the will-power, as an inescapable prerequisite to heal faster, which could only come through motivation largely from human interaction. Thus, in medical field too technology has exceeded our humanity.

Technological advancement in the field of communication has revolutionized the way in which human interact with each other. One can interact with other person living continents away literally in a fraction of second. But this too comes at a price, our online presence has taken toll of our real life interactions. One seldom finds time for family, friends and relatives. People tend to give more importance to superficiality of cyber space over the actual life. One hardly has time for critical thinking and deep introspection in this era of information bombardment. Exposure to too much information leads to short span of attention. On social media, over exposure to crimes against humanity, war pictures, bomb blast graphic images have desensitized us. It does not shake anyone anymore, and is largely taken as a normal and routine thing.

This advancement in information technology has also engulfed mass media. One is just a click away from any news around the world, for any political, social or scientific advancement around the globe. However, this too does not lead to an ideal situation for humanity. This outreach of mass media has led to new form of imperialism i.e. cultural imperialism. In cultural imperialism the dominant western culture influence all the host cultures in an effort at ‘harmonization’. This onslaught of western culture has largely led to westernization or ‘Americanization’ of cultures around the world. The cultural products of the first world, aided by technology, “invade” the third world and “conquer” its culture. All this robs humanity of diversity of civilizations and cultures, it divest humanity from diversity in human values, ethics, arts and crafts, ways of living, thought patterns and lifestyle in general.

Technology has superseded humanity in economic domain too. Technologically advanced intelligent and more efficient machines are taking the place of human beings in the industries. The replacement of manpower by the machines further aggravated the already appalling situation of unemployment. For example, Phillips electric laser plant in America has virtually replaced most of the manpower by intelligent machines on the pretext that machines are more efficient, they can work for long hours, they do not get tired and they don’t ask for increase in remuneration. This trend-if goes unchecked- will turn the wheel of unemployment and unemployment has well established links with criminal activities and a more dangerous counterpart, extremism. Unemployed workforce is easy recruits of militant organizations like ISIS and Al-Qaeda, which are already a grave threat to humanity.

Human suffering at the hand of other humans is now aided by technology. Drones, JF-17, tanks, nuclear bombs, missiles, hydrogen bombs and weapons of mass destruction are all “gifts” of technology to the warfare tactics. This technological advancement in warfare capabilities has virtually made humanity vulnerable to existential threats. Possibility of a nuclear war cannot be ruled out. If that ever happens, that will probably be the ‘last war’ as it has the propensity to wipe out humanity from the face of the earth. A show of disastrous ability of this technology at Hiroshima and Nagasaki, where 100,000 people perished just in a matter of seconds, owing to technologically advanced nuclear bomb explosion, provides a quick reminder of deleterious capability of nuclear bombs. Thus this unabated quest for technological advancement in weaponry poses a continuous and huge threat to humanity.

Use of advanced technology is not just limited to earth now. Major powers’ lust for domination has taken this warfare to space too. Rivalry among major powers is growing for placement of satellites in the space. Ostensibly, all these efforts are for peaceful purposes; however there is authentic evidence that it might have sinister futuristic designs on part of major powers. Citizen surveillance through satellite is no more a secret. Intelligence agencies justify it on the pretext of national security however this is an outright encroachment in privacy of an individual. This surveillance does not only jeopardize individual privacy but also has the potential to undermine state sovereignty. In case of drone strikes, GPS is used to locate and hit target in other states, which is against basic tenets of international law and state sovereignty.

Threats to humanity at the hand of technology are multidimensional, eminent scientists have presaged about it over a period of time. Albert Einstein was so precise when he predicted that “I fear a day when technology will surpass humanity, and human interaction. We will have a generation of idiots then.” The day he predicted is probably the day we are living in where gadgets in our hands have made us their slaves, robbed human beings of power of critical thinking and introspection literally transmuting human beings into “technology-driven idiots”. Stephen Hawking is an astrophysicist who has warned human beings of a “Robotic future” if technology goes unchecked. Stephen Hawkings – who himself rely on an artificial intelligence powered machine to speak due to his neurological disorder- is of the view that if this advancement in technology goes unchecked, it has tendency to wipe out humanity. This view is further endorsed by Norbert Wiener, founder of field of cybernetics. These warnings by people of eminence should not go unchecked, and technological advancement should be carried out with greater caution.

Technology can be made acquiescent to humanity. A happy marriage between both could be sought out through deliberation. The first principle to be followed in this regard is conscious effort to keep technology subservient to human beings. For instance, navigation is a technological tool in vehicles to suggest a way, but it still needs a driver, a human being to make higher level intelligent decisions like what should be the speed, when to apply break and where to stop, all based on environmental factors. This high level thinking function and decision making should remain a prerogative of the human being.

Technology could further augment humanity by witty use. Advancement in communication, cyberspace and social networking could be used to generate charity, spread awareness, for political mobilization. In fact, recent past has shown evidences of fruitful utilization of technology for alleviation of human suffering. For example, ‘Arab spring’ gained momentum by social media mobilization. In order to make technology only useful for humanity, efforts should be made to capitalize over it without becoming its slave. Moreover, ethical checks and application of morality on technological advancement can lead to its effective use. Creativity and high level intelligence should always remain prerogatives of human beings in order to eschew any negative fallouts of “Artificial intelligence” for humanity.

In conclusion, it could be safely reiterated that technological advancement is not ‘all-good’ as held by popular belief. It has taken its toll over human existence in social, moral and strategic domains. With every passing day, advancement in technology is bringing new challenges for humanity. It has exceeded humanity in intelligence, it has superseded human beings in efficiency and it has surpassed the master in durability. But with effective checks and balances of morality, it can remain human’s best creation and could carry on with its functions of serving humanity.