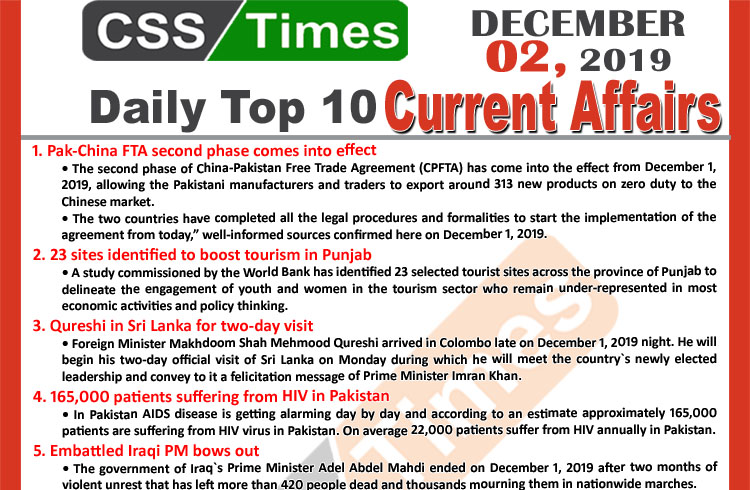 • The second phase of China-Pakistan Free Trade Agreement (CPFTA) has come into the effect from December 1, 2019, allowing the Pakistani manufacturers and traders to export around 313 new products on zero duty to the Chinese market.
• The two countries have completed all the legal procedures and formalities to start the implementation of the agreement from today,” well-informed sources confirmed here on December 1, 2019.
• Both Pakistan and China signed a protocol for the implementation of the agreement during the last visit of Prime Minister Imran Khan to China, under which, Pakistan has got the export concession on 313 new items

• Foreign Minister Makhdoom Shah Mehmood Qureshi arrived in Colombo late on December 1, 2019 night. He will begin his two-day official visit of Sri Lanka on Monday during which he will meet the country`s newly elected leadership and convey to it a felicitation message of Prime Minister Imran Khan.
• According to Foreign Office, Mr Qureshi will call on Sri Lankan President Gotabaya Rajapaksa and Prime Minister Mahinda Rajapaksa and felicitate them.
• The foreign minister will have separate meeting with his newly-appointed Sri Lankan counterpart, Foreign Minister Dinesh Gunawardena. The two sides will exchange views on the entire gamut of bilateral relations and matters pertaining to regional and international issues

• In Pakistan AIDS disease is getting alarming day by day and according to an estimate approximately 165,000 patients are suffering from HIV virus in Pakistan. On average 22,000 patients suffer from HIV annually in Pakistan.
• This was stated by Dr. Baseer Achkazi, National Program Manager, National Aids Control Program (NACP).
• World AIDS Day was observed with the theme `Communities Make the Difference’ on Sunday to raise awareness about HIV/AIDS and express solidarity with people living with the pandemic. The day is an opportunity for public and private partners to spread awareness about the status of the pandemic and encourage progress in HIV/AIDS prevention, treatment and care around the world.

• The government of Iraq`s Prime Minister Adel Abdel Mahdi ended on December 1, 2019 after two months of violent unrest that has left more than 420 people dead and thousands mourning them in nationwide marches.
• As anti-government demonstrators across the strife torn country massed to honour the fallen activists, parliament met to accept the resignation which the 77-yearold had offered two days before.
• While Abdel Mahdi stays on initially to lead a caretaker government, President Barham Saleh will now be asked to name a successor to face the challenge of resolving the political chaos that has engulfed the nation

• Migrant workers in Qatar are facing discrimination because of their nationality, racial identity, stereotyping and the `prevalence` of profiling, an independent UN expert warned on December 1, 2019.
• The Gulf monarchy has seen an influx of migrant workers, mainly from poor developing countries, in advance of the 2022 World Cup meaning that the population is 90 percent non Qatari.
• `For many people living in Qatar, their capacity to enjoy human rights fully is mediated by their nationality or national origin,` the UN`s special rapporteur on racism and discrimination Tendayi Achiume said

• Child marriages have almost been halved over the past 25 years in South Asia, falling from 59 per cent to 30 per cent today, says a UN report released this week.
• The report by the United Nations Children`s Fund (UNICEF) marks 30 years of the Convention on the Rights of the Child the most widely ratified human rights treaty in history.
• The report highlights historic gains overall for the world`s children in the past 30 years but points out that many of the poorest children are yet to feel the impact.
• In the past three decades the number of children missing out on primary school has been reduced by almost 40 per cent

• Paris, London and Berlin on December 1, 2019 welcomed six new European countries to the Instex barter mechanism, which is designed to circumvent US sanctions against trade with Iran by avoiding use of the dollar.
• “As founding shareholders of the Instrument in Support of Trade Exchanges (Instex), France, Germany and the United Kingdom warmly welcome the decision taken by the governments of Belgium, Denmark, Finland, the Netherlands, Norway and Sweden, to join Instex as shareholders,” the three said in a joint statement.
• The Paris-based Instex functions as a clearing house that allows Iran to continue to sell oil and import other products or services in exchange. The system has not yet enabled any transactions

• China will require telecom operators to collect face scans when registering new phone users at offline outlets starting on December 1, 2019, according to the country`s information technology authority, as Beijing continues to tighten cyberspace controls.
• In September, China`s industry and information technology ministry issued a notice on `safeguarding the legitimate rights and interests of citizens online`, which laid out rules for enforcing real-name registration.
• The notice said telecom operators should use `artificial intelligence and other technical means` to verify people`s identities when they take a new phone number 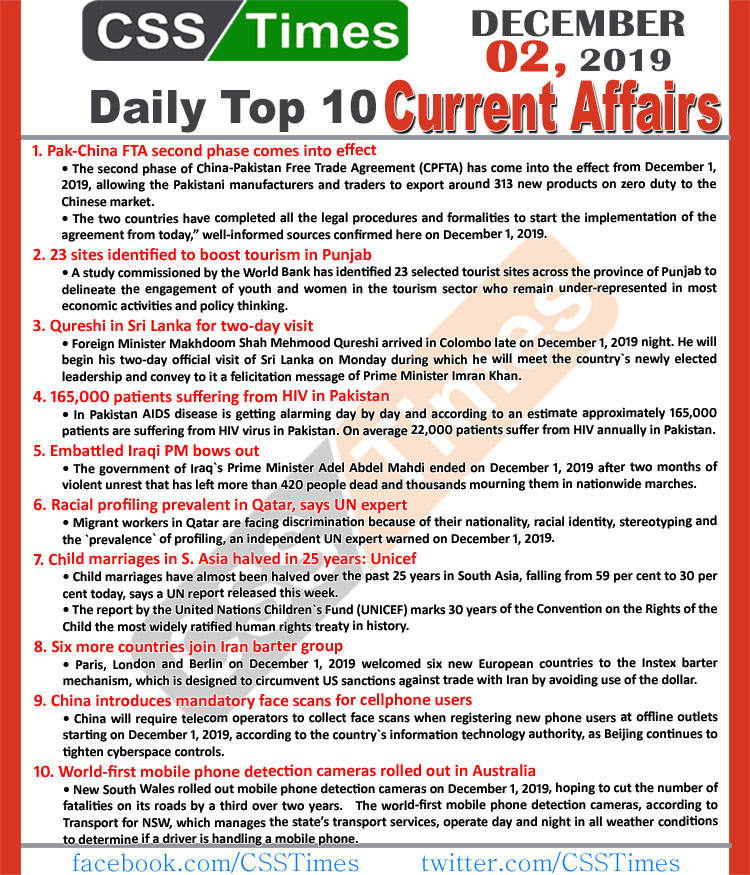