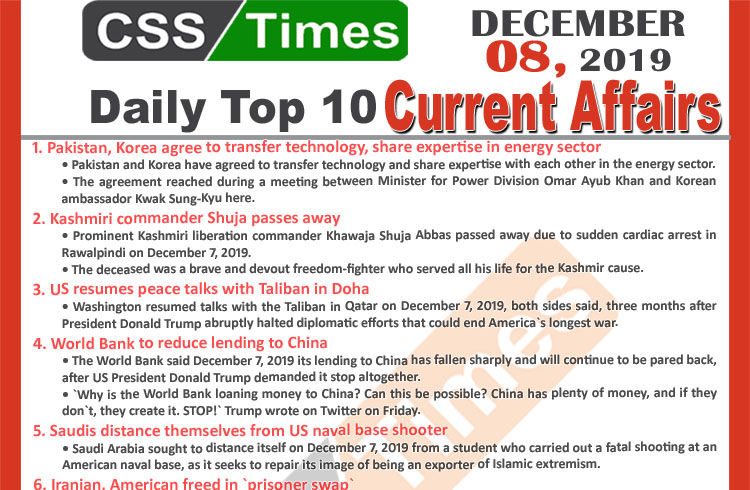 • Pakistan and Korea have agreed to transfer technology and share expertise with each other in the energy sector.
• The agreement reached during a meeting between Minister for Power Division Omar Ayub Khan and Korean ambassador Kwak Sung-Kyu here.
• Appraising the envoy about the government measures taken to bring improvement in the energy sector, the minister said ensuring transparency in all matters was the top priority of the Pakistan Tehreek-i-Insaf government.
• With the promotion of the transparency culture, Omar Ayub said all hurdles were being removed that paved the way for ensuring a conducive investment environment in the country

• Prominent Kashmiri liberation commander Khawaja Shuja Abbas passed away due to sudden cardiac arrest in Rawalpindi on December 7, 2019.
• The deceased was a brave and devout freedom-fighter who served all his life for the Kashmir cause.
• He was an Islamic scholar of 47 years of age.

3. US resumes peace talks with Taliban in Doha

• Washington resumed talks with the Taliban in Qatar on December 7, 2019, both sides said, three months after President Donald Trump abruptly halted diplomatic efforts that could end America`s longest war.
• In September, the United States and the Taliban had appeared on the verge of signing a deal that would have seen Washington begin withdrawing thousands of troops in return for security guarantees.
• It was also expected to pave the way towards direct talks between the Taliban and the government in Kabul and, ultimately, a possible peace agreement after more than 18 years of war

• The World Bank said December 7, 2019 its lending to China has fallen sharply and will continue to be pared back, after US President Donald Trump demanded it stop altogether.
• `Why is the World Bank loaning money to China? Can this be possible? China has plenty of money, and if they don`t, they create it. STOP!` Trump wrote on Twitter on Friday.
• The bank, which is led by former US Treasury official David Malpass, defended its approach in a brief statement

5. Saudis distance themselves from US naval base shooter

• Saudi Arabia sought to distance itself on December 7, 2019 from a student who carried out a fatal shooting at an American naval base, as it seeks to repair its image of being an exporter of Islamic extremism.
• The Saudi military trainee reportedly condemned the US as a `nation of evil` before going on a rampage on Friday at Naval Air Station Pensacola in Florida, killing three people and wounding eight.
• The shooting marks a setback in the kingdom`s efforts to shrug off its longstanding reputation for promoting religious extremism after the Sept 11, 2001 attacks in which 15 of the 19 hijackers were Saudis

• An Iranian held in the US and an American held in Iran have been freed, the two sides said on December 7, 2019, in an apparent prisoner swap at a time of heightened tensions.
• Tehran announced the release of Iranian scientist Massoud Soleimani from the United States shortly before Washington declared American researcher Xiyue Wang was returning home.
• `Glad that Professor Massoud Soleimani and Mr Xiyue Wang will be joining their families shortly,` Iran`s Foreign Minister Mohammad Javad Zarif tweeted

• The loss of oxygen from the ocean due to climate change might have `dire effects` on sea life, fisheries and coastal communities, a global conservation body said on December 7, 2019.
• The International Union for the Conservation of Nature (IUCN) said that around 700 sites had been identified globally with low oxygen levels up from only 45 in the 1960s.
• In the same period, the group warned, the volume of anoxic waters areas totally devoid of oxygen have quadrupled. The ocean absorbs around a quarter of all fossil fuel emissions, but as global energy demand continues to grow there are fears that the world`s seas will eventually reach saturation point.
• Oceans are expected on current trends to lose 3-4 per cent of their oxygen globally by 2100.

8. Oceans running out of oxygen as temperatures rise

• Climate change and nutrient pollution are driving the oxygen from our oceans, and threatening many species of fish.
• That’s the conclusion of the biggest study of its kind, undertaken by conservation group IUCN.
• While nutrient run-off has been known for decades, researchers say that climate change is making the lack of oxygen worse.
• Around 700 ocean sites are now suffering from low oxygen, compared with 45 in the 1960s.
• Researchers say the depletion is threatening species including tuna, marlin and sharks

• Pakistan`s javelin throw star Arshad Nadeem made the nation proud when he claimed gold medal at the 13th South Asian Games (SAG) in Kathmandu on December 7, 2019 with a record throw of 86.48 metres.
• Arshad in the process also created a South Asian Games record for men`s javelin throw. The feat also enabled the 22-year-old to become the first Pakistani in decades to directly qualify for next year`s Olympic Games taking place in Tokyo.
• Pakistan on December 7, 2019 took their medals tally to 87,including 23 gold, 30 silver and 34 bronze, and are placed fourth.
• India lead the table with 214 medals (110 gold, 69 silver, 35 bronze). Nepal are second with 142 medals (43 gold, 34 silver, 65 bronze) followed by third-placed Sri L anka with 170 medals (30 golds, 57 silver, 83 bronze).

10. International squash in Islamabad from 15th

• The Pakistan Squash Federation (PSF) on December 7, 2019 announced to hold the last Professional Squash Association (PSA) international event of the year, Serena Hotels Huawei International Squash Championship for men and women.
• The championship carrying a prize money of $20,000 for men and $12,000 for women will be held at Islamabad`s Mushaf Squash Complex from Dec 15-19, said a press release issued here.
• According to the PSF, the event will provide a platform to local and foreign PSA players to compete. It will also offer a wonderful opportunity to squash lovers to see world-class players in action 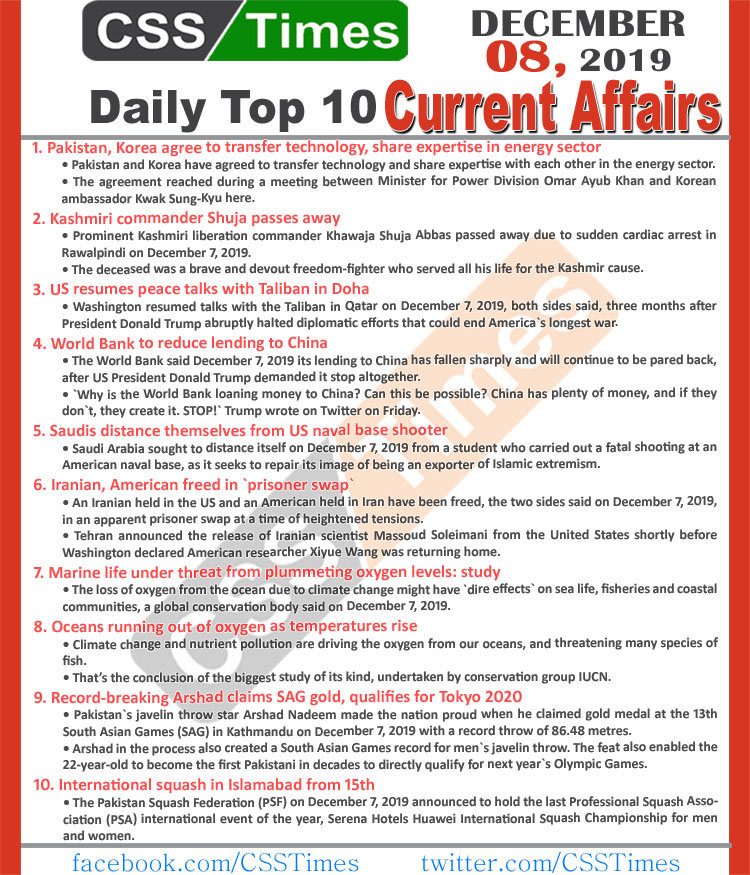