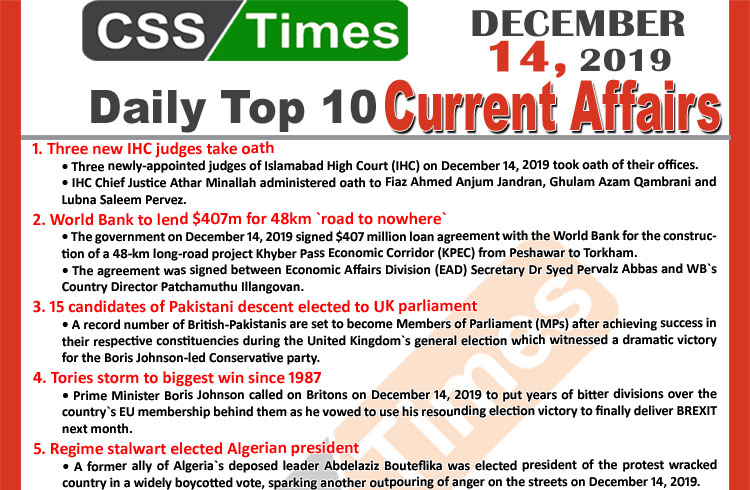 • The government on December 14, 2019 signed $407 million loan agreement with the World Bank for the construction of a 48-km long-road project Khyber Pass Economic Corridor (KPEC) from Peshawar to Torkham.
• The agreement was signed between Economic Affairs Division (EAD) Secretary Dr Syed Pervalz Abbas and WB`s Country Director Patchamuthu Illangovan.
• Earlier, the project was strongly opposed by the Central Development Working Party (CDWP) as the Planning Commission questioned its economic viability and cost estimates. The Executive Committee of the National Economic Council led by PM`s adviser approved the project in view of the improving balance of payments position

• A record number of British-Pakistanis are set to become Members of Parliament (MPs) after achieving success in their respective constituencies during the United Kingdom`s general election which witnessed a dramatic victory for the Boris Johnson-led Conservative party.
• Although the Labour party performed poorly overall, with only 203 seats as compared to the Tory tally of 365, 10 of the seats were won by British-Pakistanis for Labour and just Eve for the Conservative party.
• Successful candidates from Labour party were Naz Shah from Bradford, Khalid Mehmood from Birmingham, Yasmin Qureshi from South Bolton, Afzal Khan from Manchester Gorton, Tahir Ali from Birmingham Hall Green, Muhammad Yaseen from Bedford, Imran Hussain from Bradford East, Zarah Sultana from Coventry South, Shabana Mahmood from Birmingham Ladywood and Rozina Ali from Tooting.
• From the Conservative party, the five successful candidates were Nusrat Ghani from Wealden, Imran Ahmed from Bedfordshire, Sajid Javid from Bromsgrove, Rehman Chishti from Gillingham and Saqib Bhatti from Meriden.

• Prime Minister Boris Johnson called on Britons on December 14, 2019 to put years of bitter divisions over the country`s EU membership behind them as he vowed to use his resounding election victory to finally deliver BREXIT next month.
• Mr Johnson`s Conservatives won their best result for three decades on December 13, 2019 night after promising to get Britain out of the European Union on Jan 31.
• But in a victory speech in Downing Street, the former London mayor vowed to listen to those who opposed BREXIT and lead an inclusive, `One-Nation` government.

• A former ally of Algeria`s deposed leader Abdelaziz Bouteflika was elected president of the protest wracked country in a widely boycotted vote, sparking another outpouring of anger on the streets on December 14, 2019.
• Huge crowds massed once again in Algiers vowing to keep up their campaign for the total dismantling of the political establishment following ex-prime minister Abdel madjid Tebboune`s victory in Thursday`s poll.

• The Pentagon on December 13, 2019 flight-tested a missile that had been banned under a treaty that the United States and Russia abandoned last summer. Some US arms control advocates said the test risks an unnecessary arms race with Moscow.
• The prototype missile was configured to be armed with a non-nuclear warhead. The Pentagon declined to disclose specifics beyond saying the missile was launched from a static launch stand at Vandenberg Air Force Base in California and landed in the open ocean. The Defence Department said the ballistic missile flew more than 500 miles.
• The test comes amid growing uncertainty about the future of arms control. The last remaining treaty limitation on US and Russian nuclear weapons the New START treaty of 2010 is scheduled to expire in February 2021. That treaty can be extended for as long as five years without requiring a renegotiation of its main terms. The Trump administration has indicated little interest in doing so

• US lawmakers took the grave step on December 14, 2019 of approving two charges against Donald Trump, setting up a full House of Representatives vote to impeach the president for abusing his powers and obstructing Congress.
• Democrats and Republicans in the House Judiciary Committee voted along strict party lines, 23 to 17, appearing somber as they put Trump on track to become only the third US president ever to be impeached.
• `Today is a solemn and sad day,` committee chairman Jerry Nadler said after the votes, which were called with surprising speed following a caustic, 14-hour debate the previous day.

• UNESCO on December 14, 2019 withdrew an annual carnival in the Belgian city of Aalst from its heritage list over persistent charges of anti-Semitism.
• In an unprecedented move, UNESCO`s Intergovernmental Committee for the Safeguarding of Intangible Cultural Heritage said it was withdrawing the carnival `over recurring repetition of racist and anti-Semitic representations` at the event.
• The carnival of Aalst, in the Belgian Dutch-speaking region of Flanders, was initially added to UNESCO`s list of the intangible cultural heritage of humanity in 2010.
• But the presence in the parade of a float caricaturing Orthodox Jews with `hooked noses and sitting on gold bags` outraged Belgium`s 40,000-strong Jewish community

• A few notes scribbled in his notebook are all that German composer Ludwig van Beethoven left of his Tenth Symphony before his death in 1827. Now, a team of musicologists and programmers is racing to complete a version of the piece using artificial intelligence, ahead of the 250th anniversary of his birth next year.
• `The progress has been impressive, even if the computer still has a lot to learn,` said Christine Siegert, head of archives at Beethoven House in the composer`s hometown of Bonn.
• Siegert said she was `convinced` that Beethoven would have approved since he too wasan innovator at the time, citing his compositions for the panharmon icon a type of organ that reproduces the sounds of wind and percussion instruments.
• And she insisted the work would not affect his legacy because it would never be regarded as part of his oeuvre.

• The world`s biggest cricket stadium, with space for 110,000 spectators, is taking shape in India and is likely to host its first international match early next year.
• The new stadium in Ahmedabad, built at a cost of around $100 million, will seat more fans than Australia`s Melbourne Cricket Ground which can accommodate around 100,000 spectators.
• According to reports, the Sardar Patel Stadium is expected to host its first match in March with an exhibition game between an Asia XI and a World XI as the inaugural game.
• The stadium will have more than 70 corporate boxes, four dressing rooms, a clubhouse and an Olympic-size swimming pool. Its construction began in January 2017 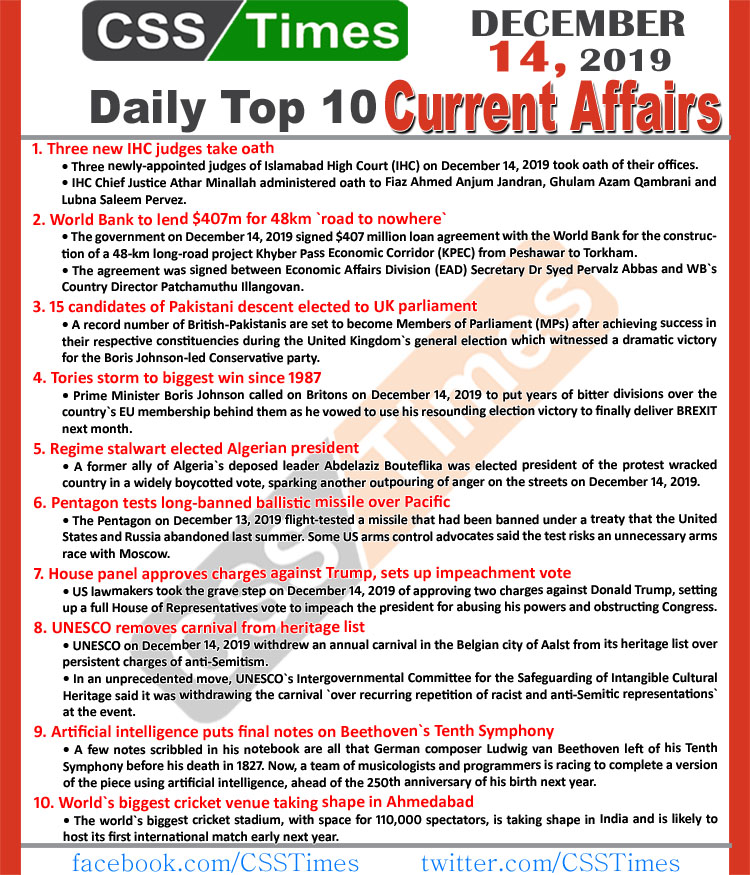