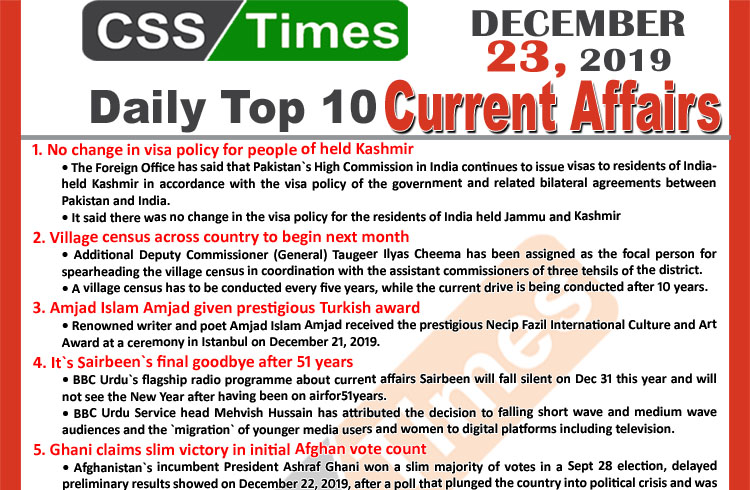 1. No change in visa policy for people of held Kashmir

2. Village census across country to begin next month

• Additional Deputy Commissioner (General) Taugeer Ilyas Cheema has been assigned as the focal person for spearheading the village census in coordination with the assistant commissioners of three tehsils of the district.
• The ninth village census will be launched across the country from January in three phases. In the first phase, it will be conducted in Punjab and Sindh. The census has been launched by the planning and development section of the Federal Bureau of Statistics during which data regarding agricultural land, livestock, housing facilities, resources of irrigation to agri lands, health, education, sports, community infrastructure, indus-trial units, natural calamity, natural resources, sanitation, employment opportunities, tourism and other such factors will be collected.
• The union council staff concerned as well as revenue officials and others of the land revenue department have been engaged to conduct the exercise.
• A village census has to be conducted every five years, while the current drive is being conducted after 10 years.

• Renowned writer and poet Amjad Islam Amjad received the prestigious Necip Fazil International Culture and Art Award at a ceremony in Istanbul on December 21, 2019.
• Turkish President Tayyip Erdogan and leading literary figures attended the event, said a dawn.com report.
• The annual award ceremony is organised by leading Turkish newspaper Star in collaboration with the Turkish ministry of culture and tourism.
• The ceremony is organised to honour the cultural and literary heritage of Turkish poet Necip Fazil

• BBC Urdu`s flagship radio programme about current affairs Sairbeen will fall silent on Dec 31 this year and will not see the New Year after having been on airfor51years.
• BBC Urdu Service head Mehvish Hussain has attributed the decision to falling short wave and medium wave audiences and the `migration` of younger media users and women to digital platforms including television.
• The BBC says its decision is based on audience research conducted last year.
• The nostalgia around Sairbeen is very strong among a generation of listeners who tuned in each evening at or around 8pm in Pakistan, half an hour later in India-held Kashmir and at 7pm in the United Arab Emirates over several decades.
• Through years of dictatorship and censorship in Pakistan, Sairbeen provided a lifeline to the audience, as it was perhaps their only means of understanding what was happening in their own backyard. Its current affairs content was carefully compiled to meet their needs.

• Afghanistan`s incumbent President Ashraf Ghani won a slim majority of votes in a Sept 28 election, delayed preliminary results showed on December 22, 2019, after a poll that plunged the country into political crisis and was marred by allegations of fraud.
• The Independent Election Commission (IEC) said the total turnout in the presidential election was more than 1.8 million with Ghani securing 50.64 percent enough to win the first round of voting beating his main challenger, Abdullah Abdullah, who currently shares power with Ghani in a unity government.

• The lucky holders of ticket number 26590 struck it rich in Spain on December 23, 2019 when they won the top prize in the nations bumper Christmas lottery.
• The top-prize winning number, known as El Gordo (The Fat One), worth 400,000 euros ($436,000) fell out of the enormous metallic shuffling bins in a live televised event. The winners won 20,000 euros for each euro spent on a 20-euro ticket.
• The incredibly popular lottery dishes out a total of 2.24 billion euros ($2.43 billion) in prizes this year, including lots of smaller prizes.
• Other lotteries have bigger individual top prizes but Spain`s Christmas lottery, held each year on Dec 22, is ranked as the world`s richest for the total prize money involved.

7. Egypt to begin gas imports from Israel next month

• BOEING Co`s Starliner astronaut spacecraft made a `bull`s-eye` landing in the New Mexico desert on December 22, 2019, a successful ending to a crewless test mission that two days earlier failed to reach the orbit needed to dock with the International Space Station.
• The 7:58 a.m. ET (1258 GMT) landing at the White Sands desert capped a turbulent 48 hours for Boeing`s botched milestone test of an astronaut capsule that is designed to help Nasa regain its human spaceflight capabilities.
• Sunday`s landing marked the first time a US orbital space capsule designed for humans landed on land.All past US capsules, including SpaceX`s Crew Dragon, splashed down in the ocean. Russia`s Soyuz capsules and China`s past crew capsules made land landings.

9. Turkey to upgrade military support to Libyan govt if needed

• Turkey would increase its military support to the internationally recognised government of Libya if necessary and will evaluate ground, air and marine options, President Tayyip Erdogan said on December 22, 2019, after the two signed a military cooperation accord last month.
• Turkey backs Fayez al-Serraj`s Government of National Accord (GNA) in Libya, which has been torn by factional connict since 2011, and has already sent military supplies to the GNA despite a United Nations arms embargo, according to a report by UN expert s.
• Turkey has also said it could deploy troops to Libya if the GNA makes such a request. The GNA has been fighting a months-long offensive by Khalifa Haftar`s forces based in the east of the country

• Emanuel Ungaro, who trained with Spanish maestro Cristobal Balenciaga before becoming a fixture of the Paris fashion scene for four decades, has died at the age of 86.
• Ungaro, who retired from his eponymous fashion house in 2004, had been in poor health for the past two years, his family said.
• Born in southern France in 1933 to Italian parents, Ungaro moved in the 1950s to Paris where he trained with Balenciaga.
• He launched his own label in 1965 and two years later moved the firm to the fashion heartland of Avenue Montaigne. 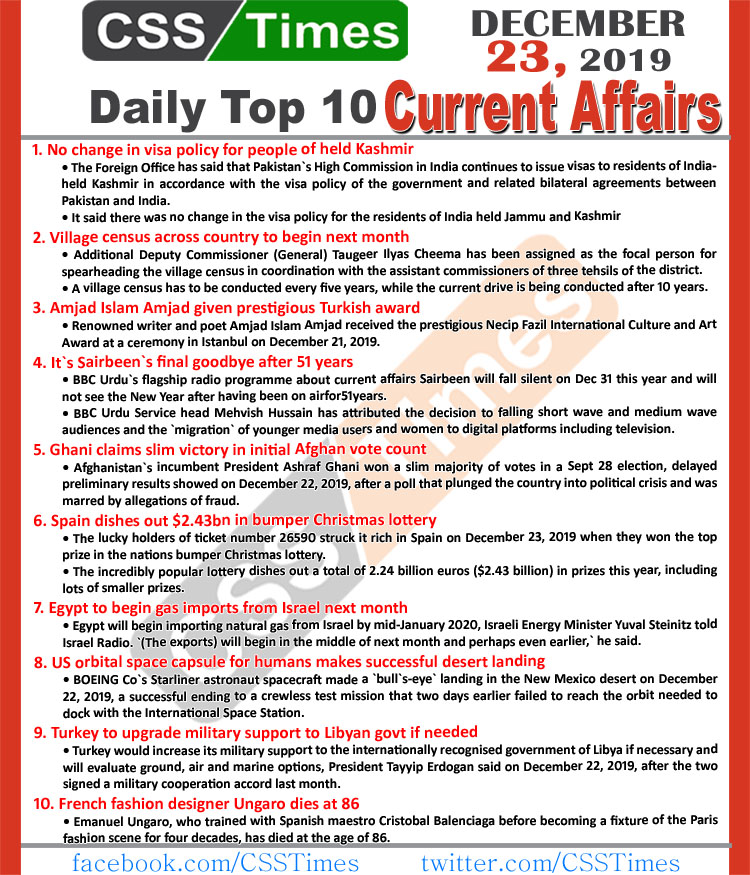