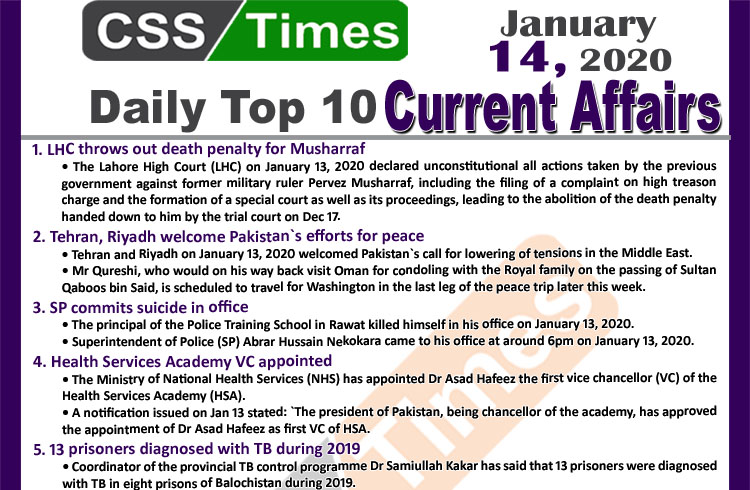 • The Lahore High Court (LHC) on January 13, 2020 declared unconstitutional all actions taken by the previous government against former military ruler Pervez Musharraf, including the filing of a complaint on high treason charge and the formation of a special court as well as its proceedings, leading to the abolition of the death penalty handed down to him by the trial court on Dec 17.
• A three-judge full bench also set aside Section 9 of `Criminal Law Amendment (Special Court) Act, 1976` for being violative to fundamental rights and ruled against retrospective effect given to an amendment in Article 6 of the Constitution, which deals with high treason, to try retired Gen Musharraf for an offence that was not an offence on the date of its occurrence.
• The section puts restriction on adjournments and allows the special court to proceed with the trial `even in the absence of any accused` after taking necessary steps to appoint an advocate to defend the accused.

• Tehran and Riyadh on January 13, 2020 welcomed Pakistan`s call for lowering of tensions in the Middle East.
• Foreign Minister Shah Mehmood Qureshi visited Tehran and Riyadh to convey Pakistan`s desire to help in de-escalating the situation. Prime Minister Imran Khan had directed the foreign minister to undertake visits to Saudi Arabia, Iran and the United States in view of sharp escalation of tensions in the Middle East in the aftermath of the assassination of senior Iranian commander Gen Qassem Soleimani by the United States.
• Mr Qureshi, who would on his way back visit Oman for condoling with the Royal family on the passing of Sultan Qaboos bin Said, is scheduled to travel for Washington in the last leg of the peace trip later this week.

• The principal of the Police Training School in Rawat killed himself in his office on January 13, 2020.
• Superintendent of Police (SP) Abrar Hussain Nekokara came to his office at around 6pm on January 13, 2020.
• He was there for some time and then shot himself using his official pistol.
• He was found by members of his staff and other police officials after they heard a gunshot.
• City Police Officer Mohammad Ahsan Younas, SP Saddar Mazhar Iqbal, the Rawat station house officer and forensic experts visited the site of the incident and collected evidence, including a suicide note.

• The Ministry of National Health Services (NHS) has appointed Dr Asad Hafeez the first vice chancellor (VC) of the Health Services Academy (HSA).
• A notification issued on Jan 13 stated: `The president of Pakistan, being chancellor of the academy, has approved the appointment of Dr Asad Hafeez as first VC of HSA.
• After the HSA (Restructuring) Act 2018 was passed by the Parliament and published in the Gazette of Pakistan in May 2018, the academy got the status of degree awarding institution. As a result, the HSA Islamabad Ordinance 2002 stood repealed

• Coordinator of the provincial TB control programme Dr Samiullah Kakar has said that 13 prisoners were diagnosed with TB in eight prisons of Balochistan during 2019.
• `In the last 20 years, more than 100,000 patients are diagnosed with TB and treated in Balochistan,` Dr Kakar said in a ceremony held on January 12, 2020 in connection with the programme.
• He said that Genexpert machines had been given to 35 centres for the timely detection of resistant TB in the province since 2018. The patients, he added, had been diagnosed and provided free treatment facility.
• `The project is considered to be the most innovative, fast, and unique initiative for elimination of TB,` he said

• Noting weak external and fiscal positions and slowing economy, Fitch Ratings on January 13, 2020 affirmed Pakistan`s long-term Foreign Currency issuer default rating at `B-negative` with a stable outlook.
• The New York-based agency -one of the three major global rating agencies noted high debt-to-GDP ratio, economic growth rate of 2.8 per cent and fiscal deficit at the elevated 7.9pc level besides high inflation and interest payments and weaker revenue growth as key weaknesses.
• It said the tighter macroeconomic policies were further slowing GDP growth, estimated at 2.8pc in FY20from 3.3pc in FY19 and gradually recovery to 3.4pc by FY21. Inflation has also continued to rise sharply from the cost pass-through of the currency depreciation and increases in energy tariffs

• Exhausted firefighters said they had finally brought Australia`s largest `megablaze` under control on January 13, 2020, as wet weather promised to deliver much-needed respite for countryside ravaged by bushfires.
• New South Wales firefighters said they finally had the upper hand in the fight against the vast Gospers Mountain fire on Sydney`s northwestern outskirts, which has been burning for almost three months.
• Visiting the area on Monday, New South Wales Rural Fire Service commissioner Shane Fitzsimmons said there was a `small area of burning still to complete` but the `containment prognosis looks promising`.

• India`s recently enacted citizenship law, which excludes Muslim and cherry-picks migrant communities from Pakistan, Afghanistan and Bangladesh for naturalisation, is fuelling anxiety in China, The Hindu said on January 13, 2020 in a report from Beijing.
• It said a Chinese official who did not wish to be named told The Hindu that Beijing apprehends that the law, if it alienates Muslims in India, could have repercussions in Xinjiang a vast strategically important border region, which has faced separatist violence.
• `We fear that if possible Muslim alienation triggered by India`s new Act spreads, it could channel in to international terrorism and eventually bolster separatism in Xinjiang,` the official said.

• Millions of Chinese are travelling smarter, faster, more efficiently and more comfortably than ever before after one of the world’s largest human migrations got underway last Friday.
• And the travel choices for the 2020 Spring Festival travel rush are also more diverse with a comprehensive transport system covering road, rail, water and air.
• The travel rush, which sees families and friends reunite around the country for China’s most important traditional holiday, began 15 days ahead of the Spring Festival, or Chinese Lunar New Year, which falls on Jan. 25 this year

• A NASA satellite has discovered an Earth-sized world within its star’s “habitable” area — where liquid water could possibly exist. The world is known as an exoplanet. This term is used for planets that orbit a star outside of our own solar system.
• NASA’s Transiting Exoplanet Survey Satellite, or TESS, made the discovery. TESS was launched in 2018 to expand on the work of earlier exoplanets that space telescopes had discovered. Exoplanets are hard for telescopes to identify; the bright lights of the stars they orbit can hide them.
• TESS contains four individual cameras that search for drops in light levels. This may be linked to planetary movements. Scientists then attempt to confirm the presence of worlds and try to estimate the size and orbit of the planets 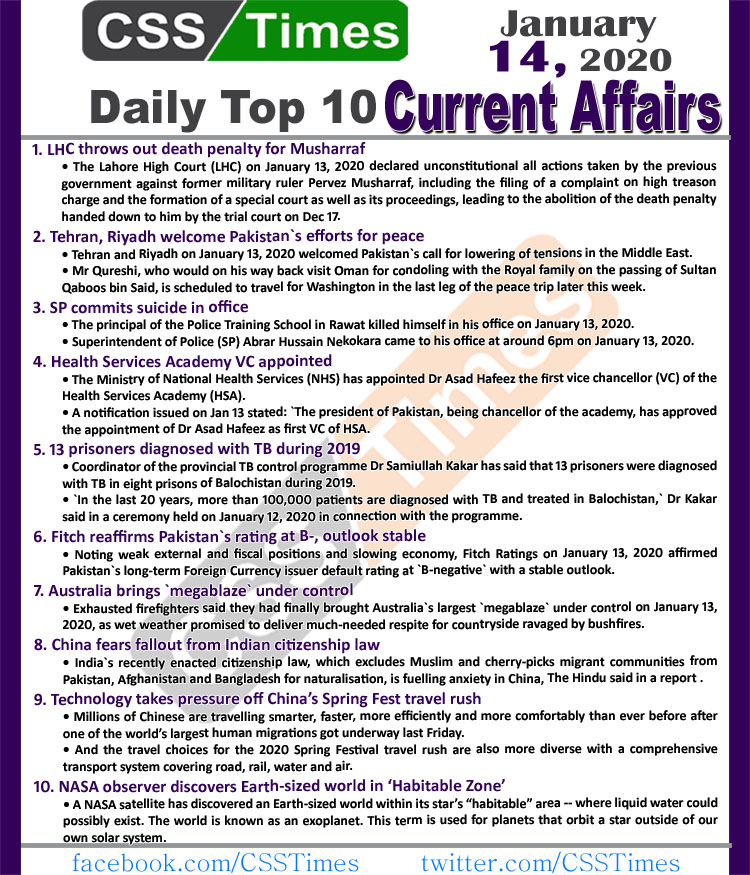