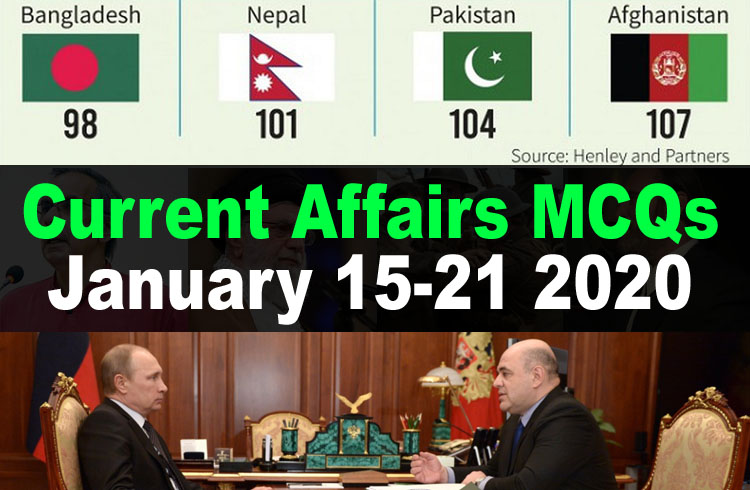 Which famous International Tennis tournament is held in the month of January, every year?
(a) French Open
(b) US Open
(c) Australian Open
(d) Wimbledon
Answer: (c)
Explanation: The Australian Open is held annually over the last fortnight of January in Melbourne, Australia. The tournament is the first of the four Grand Slam tennis events held each year, preceding the French Open, Wimbledon, and the US Open.

Name the female actor who won the ‘Outstanding Performance by a Female Actor in a motion picture’ award in the Screen Actors Guild Awards?
(a) Robin Wright Penn
(b) Renée Kathleen Zellweger
(c) Catherine Zeta-Jones
(d) Roxie Hart
Answer: (b)
Explanation: Academy Award-winning actress Renee Zellweger is known for her roles in ‘Jerry Maguire,’ ‘Cold Mountain,’ ‘Chicago’ and the ‘Bridget Jones’s Diary’ film series. Zellweger appeared in bit parts in mainstream movies like Dazed and Confused (1993) and Reality Bites (1994), before earning praise for her leading roles in the independent films Love and a .45 (1994) and The Whole Wide World (1996), co-starring Vincent D’Onofrio.

Which famous international company is to release its original film named ‘The Banker’?
(a) Amazon
(b) Apple
(c) HBO
(d) Netflix
Answer: (b)
Explanation: The film was originally set to premiere at AFI Fest on November 21, 2019, ahead of a limited theatrical release in early December. One day before its premiere, Apple TV+ postponed the release amid sexual abuse allegations against Bernard Garrett Jr., a co-producer on the film and the son of Bernard Garrett. These allegations were made by Garrett Jr.’s half-sister Cynthia Garrett.

The birth rate of which country fell to the lowest, since the founding of the country seven decades ago?
(a) Pakistan
(b) India
(c) China
(d) Indonesia
Answer: (c)
Explanation: China’s birth rate has fallen to its lowest since the formation of the People’s Republic of China 70 years ago – despite the easing of the much criticised one-child policy. The birth rate was 10.48 per 1,000 in 2019 – the lowest since 1949. The number of babies born in 2019 dropped by 580,000 to 14.65 million. The country’s birth rate has been falling for years – posing a challenge for the world’s second-biggest economy.

The passengers returning from which country are to be screened for novel Corona virus (nCov), in 3 US airports?
(a) Japan
(b) Wuhan, China
(c) South Korea
(d) Thailand
Answer: (b)
Explanation: At San Francisco International, Los Angeles International, and John F. Kennedy International Airport in New York, the three US airports with direct flights from Wuhan, arriving passengers began to be screened for symptoms of the virus ahead of the Chinese New Year peak travel season.

Which major tech-company recently announced that it has planned to cut more than half of carbon emissions across its supply chain, by 2030?
(a) Google
(b) Microsoft
(c) IBM
(d) Infosys
Answer: (b)
Explanation: Microsoft plans to cut its carbon emissions by more than half by 2030 across its supply chain. The plan includes the creation of a “Climate Innovation Fund,” which will invest $1 billion over the next four years to speed up the development of carbon removal technology.

The ‘World Economic Situation and Prospects report’ is released by which organisation?
(a) World Bank
(b) UNO
(c) IMF
(d) WTO
Answer: (b)
Explanation: The United Nations’ flagship publication on expected trends in the global economy, the World Economic Situation and Prospects 2020 is produced annually by the UN Department of Economic and Social Affairs (DESA), the UN Conference on Trade and Development (UNCTAD) and the five UN regional commissions

According to the recent study conducted by the Swiss bank Julius Baer, which is the most expensive city of the world for luxury goods?
(a) Karachi
(b) Singapore
(c) Hong Kong
(d) Tehran
Answer: (c)
Explanation: Hong Kong was found to be the priciest city in the world for luxury products and services, according to a report by private bank Julius Baer. It is the most expensive place to hire a lawyer, due to being a financial center, with a simple will consultation setting someone back $1,050 on average. Hong Kong also has among the highest price tags for property, cars, a business class flight, fine dining, a wedding banquet and beauty services. However, Hong Kong puts no duties on jewelry, meaning it can be a relatively the cheap city to buy this high-end product, though a Cartier Love bracelet will still cost $42,228. It costs even more in Brazil’s capital of Rio de Janeiro, at $54,852, as taxes on jewelry can be double the levies charged in North America and Europe.

The United States recently signed the first phase of historic trade deal with which country?
(a) Mexico
(b) China
(c) Argentine
(d) Canada
Answer: (b)
Explanation: President Trump and Chinese Vice Premier Liu He signed an initial “Phase One” trade deal Wednesday, freezing an almost 20-month trade war between Washington and Beijing and giving Trump a political boost as he seeks reelection.
In the agreement, China committed to boosting purchases of U.S. goods and services by $200 billion over the next two years, including $77.7 billion for manufactured goods and $32 billion for agricultural products.

Who was named Pakistan’s new chief election commissioner?
(a) Nisar Durrani
(b) Sikandar Sultan Raja
(c) Shah Mehmood Jatoi
(d) Raja Pervez Ashraf
Answer: (b)
Explanation: Raja was born in a village in District Sargodha to a father who was an officer in the Pakistan Army. He was schooled at the Government High School Bhera and later went to the Cadet College Hasan Abdal for further education. Raja was an exceptional student who went on to obtain an MBBS degree from the prestigious King Edward Medical College in Lahore. In addition to that, Raja also earned a degree in law from the Punjab University and passed his Central Superior Services (CSS) Exam in 1987.
After passing his CSS exams, Raja was posted as assistant commissioner Islamabad.
Throughout his career, he held many important positions, including the post of deputy commissioner Islamabad. Raja was also posted as director-general Excise & Taxation Punjab, provincial secretary Communications & Works Punjab, provincial secretary Services & General Administration Punjab, and director-general Immigration & Passports in the federal government.
The new CEC also served as chief secretary Gilgit Baltistan (GB), CS Azad Kashmir (AJK), and federal secretary Petroleum & Natural Resources, and recently retired as secretary of Pakistan Railways.

The entire government of which country resigned recently after the constitutional amendments announced by its President?
(a) Venezuela
(b) Russia
(c) Turkey
(d) Ukraine
Answer: (b)
Explanation: The principal ministers of the Russian government, from Prime Minister Dmitry Medvedev on down, resigned in a move designed to ease a constitutional overhaul recently proposed by President Vladimir Putin. The president accepted Medvedev’s resignation and said he would appoint his longtime loyalist to the Russian Security Council. Putin also nominated Mikhail Mishustin, head of the Federal Tax Service, to replace Medvedev as prime minister, according to Russia’s state-run Tass news agency. The rest of the ministerial Cabinet is expected to remain until their replacements are determined.

Which cricketer won the ‘Sir Garfield Sobers Trophy’ for ‘Player of the Year’, presented by the International Cricket Council (ICC)?
(a) Kane Williamson
(b) Ben Stokes
(c) Naseem Shah
(d) Abid Ali
Answer: (b)
Explanation: England all-rounder Ben Stokes added another feather to his cap by claiming the Sir Garfield Sobers Trophy for the International Cricket Council Cricketer of the Year, to cap off a fabulous 2019, during which he became a 50-over World Cup winner and served up a buffet of unforgettable performances.

Which badminton player recently won the Malaysian Masters 2020 title?
(a) Kento Momota
(b) Lin Dan
(c) Chen Long
(d) Tian Houwei
Answer: (a)
Explanation: Japan’s No. 1 men’s singles shuttler Kento Momota ended his wait for a first title in Malaysia when he defeated Denmark’s Viktor Axelsen in the Perodua Malaysian Masters final on Sunday (Jan 12). The defending world champion, who suffered a first round defeat last year, was a class above as he took 54 minutes to subdue the world No. 5 Axelsen with a 24-22,21-11 win.

Which technology company has recently launched the new version of its ‘Edge Chromium’ browser for both Mac and Windows platforms?
(a) Mozilla
(b) Apple
(c) Microsoft
(d) Google
Answer: (c)
Explanation: Microsoft is officially launching its new Edge Chromium browser today across both Windows and macOS. A stable version of the browser is now available for everyone to download, just over a year after the software maker revealed its plans to switch to Chromium.

The deadly Coronavirus spread widely in which country in January 2020?
(a) South Korea
(b) Thailand
(c) China
(d) Japan
Answer: (c)
Explanation: Coronaviruses attack the respiratory system, sometimes targeting the cells deep within the lungs. Only seven, including 2019-nCoV, SARS, and MERS, are known to be spread to humans.
• The air through coughing and sneezing
• Close personal contact, including touching and shaking hands
• Touching an object or surface with the virus on it, then touching your mouth, nose, or eyes before washing your hands
• Fecal contamination (this is rarer)

Labour Party candidate Robert Abela elected as 14th prime minister of ___ on January 2020?
(a) Cyprus
(b) Spain
(c) Malta
(d) Greece
Answer: (c)
Explanation: New Maltese Prime Minister Robert Abela reshuffled his cabinet on Wednesday (15 January), sidelining some of the politicians who had faced fierce criticism from an anti-corruption journalist before her murder in 2017. Abela, 42, was sworn in as prime minister of the small Mediterranean island on Monday, succeeding Joseph Muscat who resigned over his handling of investigations into the killing of Daphne Caruana Galizia.

Who is the Current Prime Minister of Russia?
(a) Dmitry Medvedev
(b) Vladimir Putin
(c) Mikhail Mishustin
(d) Oleg Lobov
Answer: (c)
Explanation: Mikhail Mishustin, Russia’s new prime minister, comes to prominence little known by the public but as a rock star among technocrats. Mishustin became famous within a policy genre that, even for hardcore wonks, has only a niche audience: tax enforcement.
Between this public service and his private sector background, many commentators say, Mishustin’s nomination underscores President Vladimir Putin’s concerns about the resuscitation of Russia’s stagnant economy. They are not wrong. But to view the significance of Mishustin’s nomination only in terms of its first-order implications for Russia’s economic growth is to indulge a myopia that would itself advance the farther-sighted strategic vision for Russia that his appointment likely reflects: a pivot toward a new brand of techno-authoritarianism.

Which country recently passed a law to make ‘ethnic unity’ mandatory?
(a) India
(b) Israel
(c) Tibet/China
(d) Russia
Answer: (c)
Explanation: The People’s Congress of Tibet passed a law that makes ethnic unity in the region mandatory, reflecting the significant role that the autonomous Himalayan region plays in its economic and social development. These regulations will come into effect from May 1 and are meant to “strengthen ethnic unity”. There are more than 40 ethnic minorities in the region, which account for 95 per cent of Tibet’s population of over three million.

According to the Henley Passport Index 2020, Which country passport is the most powerful passport in the world?
(a) China
(b) Japan
(c) U.K
(d) Australia
Answer: (b)
Explanation: The Henley Passport Index, an annual ranking of the most powerful passports in the world based on how many destinations the holder can enter without a visa, was just released. Japan secured the top spot this year, with access to 191 countries and territories, a position it previously shared with Singapore.