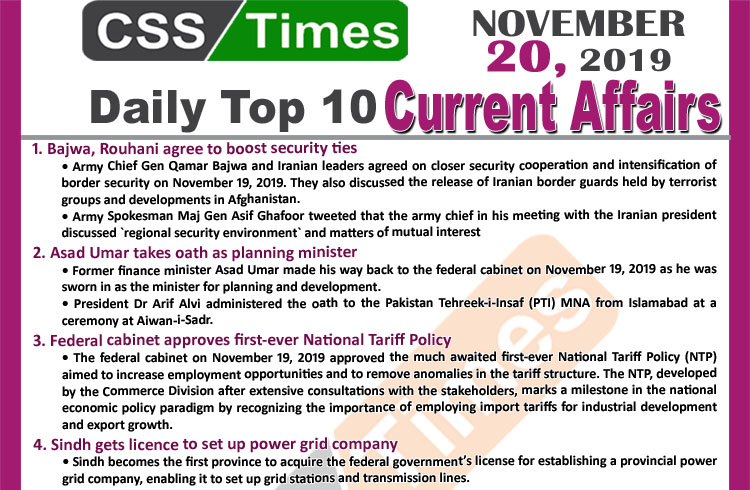 • Former finance minister Asad Umar made his way back to the federal cabinet on November 19, 2019 as he was sworn in as the minister for planning and development.
• President Dr Arif Alvi administered the oath to the Pakistan Tehreek-i-Insaf (PTI) MNA from Islamabad at a ceremony at Aiwan-i-Sadr.
• His predecessor in the planning ministry Makhdoom Khusro Bakhtiar was given the portfolio of minister for national food security, which was previously held by Sahibzada Mehboob Sultan, sources said.
• Mr Sultan has now been made the federal minister for States and Frontier Regions, the ministry that was previously headed by Shehryar Afridi as a minister of state.

• The federal cabinet on November 19, 2019 approved the much awaited first-ever National Tariff Policy (NTP) aimed to increase employment opportunities and to remove anomalies in the tariff structure. The NTP, developed by the Commerce Division after extensive consultations with the stakeholders, marks a milestone in the national economic policy paradigm by recognizing the importance of employing import tariffs for industrial development and export growth.
• Prime Minister Imran Khan, in his remarks during the Cabinet meeting, said that the import tariffs have been traditionally employed as a revenue generation tool, which has increased reliance on import tariffs for revenue collection.
• In accordance with the reform agenda of the government, the economic policy paradigm is now being realigned to leverage tariffs for industrial development.

4. Sindh gets licence to set up power grid company

• Sindh becomes the first province to acquire the federal government’s license for establishing a provincial power grid company, enabling it to set up grid stations and transmission lines.
• This was announced by Sindh’s Power Minister Imtiaz Shaikh, who added under the federal government’s license, the province through the Sindh Transmission and Despatch Company (STDC) will be able to efficiently transmit power produced in the province.
• Imtiaz said Sindh had become the first province given a license for setting up a grid company. Crediting persistent efforts of PPP Chairman Bilawal Bhutto and Chief Minister Murad Ali Shah for the development, the provincial power minister termed it a good news for the people of the province.

• Like the whole world, Pakistan also marked November 19 as the World Toilet Day with toilet facility available to 94 percent across the country.
• By 2017-18, in Pakistan, only 6 percent population lacked the facility to have access to toilets. And in urban areas, 99 percent people had the toilet facility and only 1 percent didn’t possess the said facility. However, in rural areas, 91 percent people had access to toilet facility, whereas 9 percent had no access.
• In Pakistan, average toilets per household stood at 1.3. However, in urban areas of the country, the average toilets per household were at 1.4 and in rural areas of Pakistan, the average toilets per household stood at 1.2. About 13.2 million individuals and two million households had no access to toilet facility in Pakistan.
• According to the United Nations report on World Toilet Day with focus on water, sanitation and hygiene around the world, approximately 2.2 billion people worldwide lack access to safe drinking water, 4.2 billion have to go without safe sanitation services and 3 billion lack basic hand washing facilities. By 2015, close to a billion people were still defecating outdoors, resulting in widespread diseases and millions of deaths. That drove the UN to call for an end to the practice and some parts of the world have proven hugely successful in eradicating it.

• After marathon negotiations, the Afghan Taliban on November 19, 2019 freed two Western hostages, American national Kevin King and Australian Timothy Weeks, after holding them in captivity for more than three years.
• Taliban had kidnapped them from the Kabul-based American University in August 2016. In return, the US and Afghan authorities released three high-profile Taliban prisoners, flew them to Qatar, and handed them over to members of the Taliban political office there. The Taliban prisoners included Anas Haqqani, Haji Mali Khan and Hafiz Abdur Rasheed Omari.
• Taliban spokesman Zabihullah Mujahid and a spokesman for the Qatar-based political office, Suhail Shaheen confirmed the prisoners’ swap. Anas Haqqani is the son of veteran Afghan mujahideen leader late Maulvi Jalaluddin Haqqani and younger brother of Sirajuddin Haqqani, the head of Haqqani militant network and deputy chief of Afghan Taliban.

• Reclusive Turkmenistan staged its first foreign opera on November 19, 2019, nearly 19 years after the Central Asian country`s founding president banned the art form as `incompatible with Turkmen mentality`.
• A state theatre in the capital Ashgabat was packed for the staging of 19th century Italian composer Ruggero Leoncavallo`s opera `Pagliacci` (`Clowns`) as part of an international drama festival.
• Older spectators leaving the theatre late on a cool November 19, 2019 night voiced a nostalgia for the long-taboo art form while younger spectators enthused over the performance.
• Mekan Byashimov, a 54-year-old schoolteacher said he hoped that operas would be staged regularly and that ballet would also make a reappearance on the national stage

• NASA scientists have confirmed, for the first time, the existence of water above the surface of Europa, one of Jupiter’s 79 moons. The study published on November 19, 2019 in the journal Nature Astronomy showed that they detected water releasing from Europa by 2,360 kilograms per second, enough to fill an Olympic-size swimming pool within minutes.
• Scientists previously suspected the liquid water is present under its icy surface and may sometimes erupt into space in huge geysers. But no one has been able to confirm its presence in plumes by directly measuring the water molecule itself.
• The team led by Lucas Paganini, a NASA planetary scientist, used a spectrograph at the Keck Observatory that measures the chemical composition of planetary atmospheres through the infrared light they emit or absorb.

• Pakistan’s wonder boy 13-year-old Syed Imaad Ali became the youngest player ever to win the Junior World Scrabble Championship 2019, played in Torquay, England.
• Imaad remained in the lead right throughout the championship and was declared champion with one match to spare, with a 17-3 record and a spread of 2,159. He is only the second player in the history to have won both the World Youth Scrabble Championship (now renamed WESPA Youth Cup) and the Junior World Scrabble Championship; the first one being compatriot Moiz Baig.
• Pakistani players dominated the championship throughout and walked away with a number of trophies as well as the top five positions. Daniyal Sanaullah capped a great tournament by winning the runners-up trophy with 15 wins and a spread of 1,335 while Hassan Hadi finished third with 15 wins and a spread of 1,024 and Sohaib Sanaullah and Hammad Hadi finished fourth and fifth respectively

• The International Tennis Federation (ITF) has nominated Kazakhstan’s capital Nur-Sultan as the neutral venue to host the upcoming Davis Cup between Pakistan and India.
• “We’ve received a late night message from the ITF that its Independent Tribunal has endorsed the decision taken by the Davis Cup Committee to shift the tie to a neutral venue,” Khawar Hayat, senior vice president of PTF told APP.
• Pakistan was earlier scheduled to host India in the Davis Cup Asia Oceania Group-I Tie on September 14-15 at the grass courts of Pakistan Sports Complex, Islamabad, where matches against Uzbekistan, Korea and Thailand took place in 2017 and 2018. 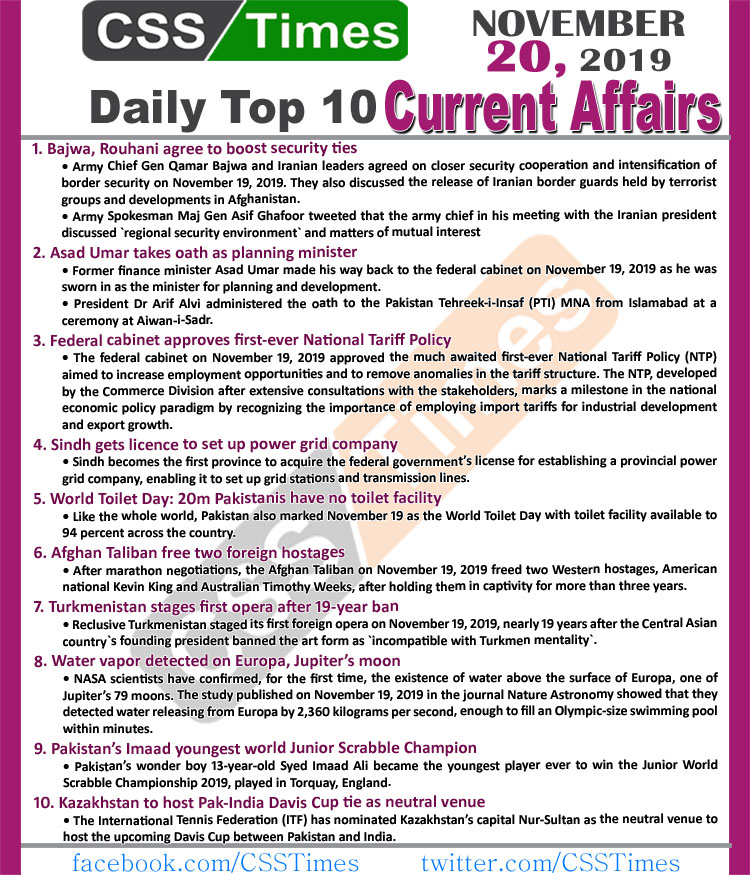