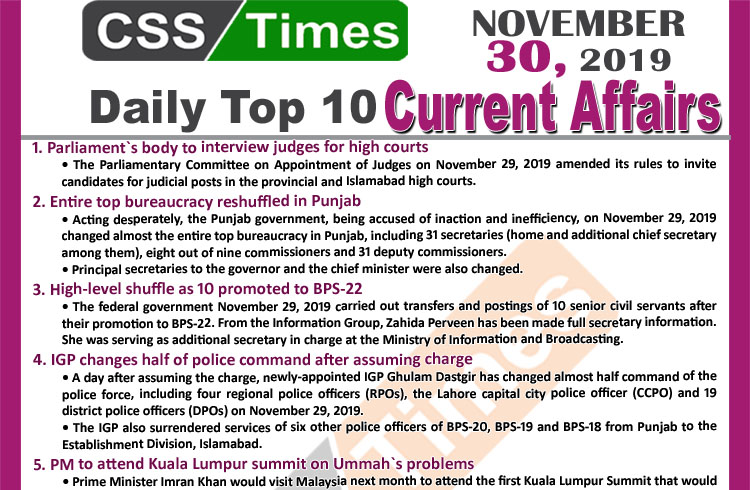 • The Parliamentary Committee on Appointment of Judges on November 29, 2019 amended its rules to invite candidates for judicial posts in the provincial and Islamabad high courts.
• Earlier, the parliamentary committee, in the wake of a judicial order during the period of former chief justice Iftikhar Mohammad Chaudhry, had virtually become a rubber stamp. The apex court while examining the scope of the committee held that recommendations of the Judicial Commission of Pakistan (JCP) would stand approved if the committee could not consider a name within 14 days. The former CJP had also made it difficult for the parliamentary committee to reject the JCP`s recommendations.
• As per the amended rules, in case of non-appearance before the parliamentary committee, the nomination of a judge will be deemed to have been cancelled. The committee also decided to invite three nominees recommended by the JCP for the vacant positions in the Islamabad High Court. The committee will meet again on Dec 4. Besides considering the names of lawyers for the IHC posts, it will also elect its new chairman to preside over meetings for a period of six months.

• Acting desperately, the Punjab government, being accused of inaction and inefficiency, on November 29, 2019 changed almost the entire top bureaucracy in Punjab, including 31 secretaries (home and additional chief secretary among them), eight out of nine commissioners and 31 deputy commissioners.
• Principal secretaries to the governor and the chief minister were also changed.
• Political and administrative circles have been accusing Chief Minister Usman Buzdar of stalling activity in the province. Media has also been hinting at prime minister`s reported insistence to carry on with his hand-picked chief minister from south Punjab despite concerns being shown even within his party over the `slow motions` of the provincial PTI government.
• Administrative officers and political circles termed Friday`s tsunami of reshuffle a mad rush to divert attention from the performance of the PTI political leadership. They also apprehended that changing of officials from one place to another would not do any good to the province or its people.

4. IGP changes half of police command after assuming charge

• A day after assuming the charge, newly-appointed IGP Ghulam Dastgir has changed almost half command of the police force, including four regional police officers (RPOs), the Lahore capital city police officer (CCPO) and 19 district police officers (DPOs) on November 29, 2019.
• The IGP also surrendered services of six other police officers of BPS-20, BPS-19 and BPS-18 from Punjab to the Establishment Division, Islamabad.
• The transfer of Rahim Yar Khan DPO Amir Taimur, the relative of Chief Minister Usman Buzdar, remained the talk of the town.
• The major initiative was taken in respect of change of command of Lahore police by making transfer of CCPO BA Nasir and Operations DIG Ashfaq Ahmad Khan. Both officers have been replaced by Information Technology DIG Zulfiqar Hameed and DIG Logistics and Procurement Rai Babar Saeed, respectively.

• Prime Minister Imran Khan would visit Malaysia next month to attend the first Kuala Lumpur Summit that would discuss Ummah`s problems.
• The invitation for the Summit was delivered to PM Khan by Malaysian prime minister`s special envoy, Deputy Foreign Minister Marzuki Bin Haji Yahya on Friday.
• The summit being held in the Malaysian capital from Dec 18 to 20 is being attended by Indonesia, Turkey, Pakistan and Qatar in addition to host Malaysia. The event`stheme is `The Role of Development in Achieving National Sovereignty`.
• The Summit is aimed at understanding the problems afflicting the global Muslim community and suggesting the way towards addressing them.

• MQM-Pakistan lawmaker Barrister Farogh Naseem was sworn in as federal minister on November 29, 2019.
• President Dr Arif Alvi administered the oath to him at a ceremony held in Aiwan-e-Sadr. It has not yet been announced which portfolio he would be given.

• Iraqi Prime Minister Adel Abdul Mahdi announced his resignation on November 29, 2019 after the country`s top cleric urged lawmakers to reconsider their support for a government rocked by weeks of deadly anti-establishment unrest.
• The move was the latest twist in an unprecedented crisis for war-weary Iraq, which has struggled to recover from decades of conflict, civil unrest and sanctions.
• The departure of Abdul Mahdi could be a blow for Iranian influence after Iran`s militia allies and its own commanders intervened last month to keep the premier in place despite mass anti-government unrest.
• Iraq`s biggest unrest for years pits protesters from Shia heartlands in Baghdad and the south against the ruling elite seen as a pawn of Iran.

• US President Donald Trump paid a surprise Thanksgiving visit to Afghanistan, where he announced the US and Taliban have been engaged in ongoing peace talks and said he believes the Taliban wants a ceasefire.
• In his first trip to the site of America’s longest war, Trump arrived at Bagram Air Field shortly after 8:30 pm local time Thursday and spent more than two-and-a-half hours on the ground, serving turkey, thanking the troops and sitting down with Afghan President Ashraf Ghani.
• As per tradition, reporters were under strict instructions to keep the trip a secret to ensure his safety in the country. About 12,000 US forces remain in Afghanistan

• World-renowned American free solo climber has died attempting to descend the side of a cliff face. Brad Gobright, 31, fell around 300m (1,000 ft) to his death in El Potrero Chico in northern Mexico.
• His companion, fellow climber Aidan Jacobson, 26, fell a shorter distance and survived with injuries.
• Gobright was best known for free soloing, or climbing without any safety gear, but at the time the two were abseiling, a technique using ropes. Abseiling accidents are believed to be the most common cause of fatalities in the sport 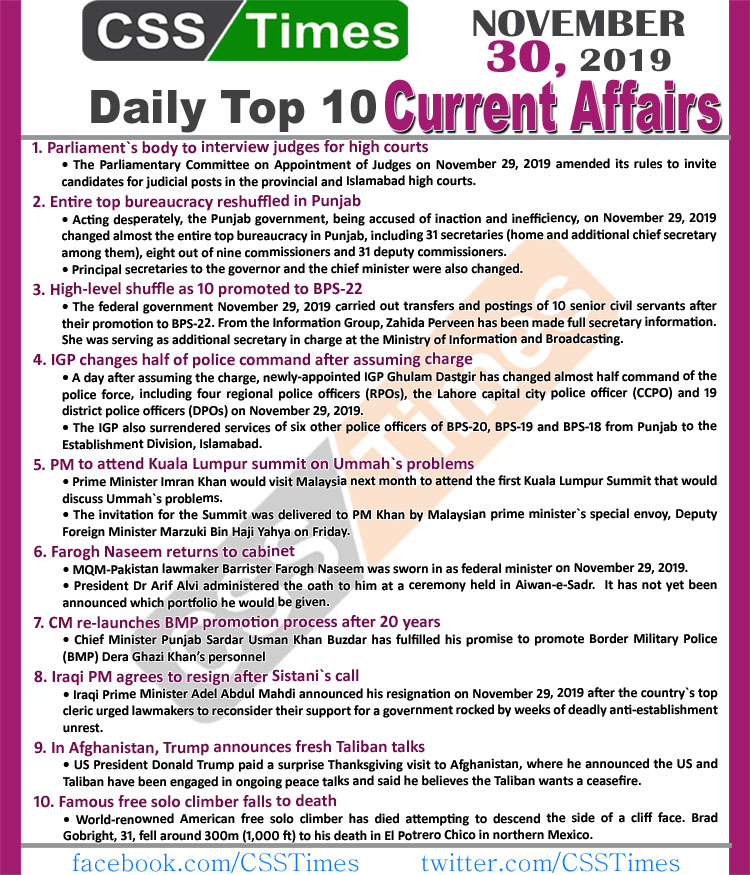