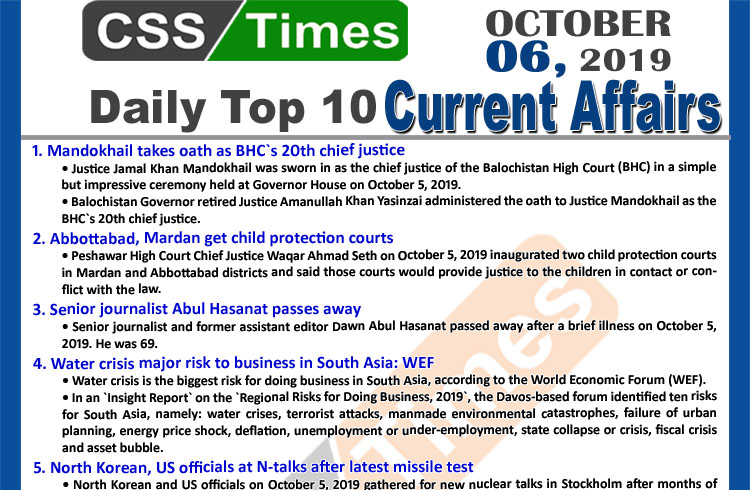 • Justice Jamal Khan Mandokhail was sworn in as the chief justice of the Balochistan High Court (BHC) in a simple but impressive ceremony held at Governor House on October 5, 2019.
• Balochistan Governor retired Justice Amanullah Khan Yasinzai administered the oath to Justice Mandokhail as the BHC`s 20th chief justice.
• During his 21 years of practice at the bar, Justice Mandokhail conducted numerous constitutional, criminal, civil and service cases before the superior and subordinate judiciary. He remained on the panel of advocates for the National Bank of Pakistan and served as the additional deputy prosecutor gener al in the National Accountability Bureau (NAB) from 2000 to 2001 and in an honorary capacity as a lecturer in the University Law College, Quetta.

• Peshawar High Court Chief Justice Waqar Ahmad Seth on October 5, 2019 inaugurated two child protection courts in Mardan and Abbottabad districts and said those courts would provide justice to the children in contact or conflict with the law.
• These courts have been empowered by the Khyber Pakhtunkhwa Child Protection and Welfare Act, 2010, and Juvenile Justice System Act, 2018. The first child protection court was inaugurated in Peshawar on March 16.
• Both Mardan and Abbottabad child courts have colourful walls, handmade drawings, toys, books, swings, green environment and games to create a child-conducive environment.
• The high court has posted additional district and sessions judges Faryal Zia Mufti and Syed Iftikhar Shah as presiding officers to the Mardan and Abbottabad child courts, respectively.

• Senior journalist and former assistant editor Dawn Abul Hasanat passed away after a brief illness on October 5, 2019. He was 69.
• He is survived by his wife, two daughtersand a son.
• Born in Karachi in November 1950, Mr Hasanat was one of five sons of Abul Akhyar, a veteran journalist who passed away in September 2010

• Water crisis is the biggest risk for doing business in South Asia, according to the World Economic Forum (WEF).
• In an `Insight Report` on the `Regional Risks for Doing Business, 2019`, the Davos-based forum identified ten risks for South Asia, namely: water crises, terrorist attacks, manmade environmental catastrophes, failure of urban planning, energy price shock, deflation, unemployment or under-employment, state collapse or crisis, fiscal crisis and asset bubble.
• At a country level, water crises ranked as the topmost risk in India, second in Pakistan and fourth in Sri Lanka. The issue has been described as a `problem of scarcity amid abundance` in South Asia despite major trans boundary rivers, residents in many places must queue for limited supplies of drinking water.
• According to the report, water also presents geopolitical challenges in the region; while there are bilateral arrangements on the Indus between India and Pakistan, and Ganges between India and Bangladesh, water is a potential weapon in cross-border disputes, as countries have at times threatened cutting off flows because of outbreaks of violence in disputed territories. Additionally, China, from where the headwaters of several major rivers sit, has been building hydroelectric dams that have caused political friction, particularly with India.

5. North Korean, US officials at N-talks after latest missile test

• North Korean and US officials on October 5, 2019 gathered for new nuclear talks in Stockholm after months of deadlock and Pyongyang`s defiant test of a sea launched ballistic missile this week.
• North Korea`s Kim Myong Gil and Stephen Biegun, the special envoy of US President Donald Trump, are part of the teams at the talks.
• The two were to meet at a heavily guarded venue on an island off Stockholm, several hundred metres from the North Korean embassy, a correspondent said.
• The first cars with tinted windows started arriving just after 9am.
• `I am encouraged that US and (North Korean) working level delegations are currently in Sweden to hold talks,` Swedish Foreign Minister Ann Linde tweeted.

• A US Senate panel has attached an amendment to a finance bill that requires India to end its lockdown and curfew in held Kashmir and fully restore communications links to the occupied valley.
• The amendment, attached to the Foreign Appropriations Act for 2020, was moved in the Senate Appropriations Committee, and is seen as the first step towards US legislative action against India over its Aug 5 annexation of the occupied lands.
• The committee, while encouraging enhanced US engagement with India on issues of mutual interest, noted `with concern the current humanitarian crisis in Kashmir.

• US payments processor PayPal Holdings Inc said it was leaving Libra Association, the entity managing the Facebook-led effort to build global digital currency Libra, making it the first member to exit the group.
• PayPal said it would forgo any further participation in the group and would instead focus on its own core businesses. `We remain supportive of Libra`s aspirations and look forward to continued dialogue on ways to work together in the future,` PayPal said in a statement.

• The first all-female spacewalk is back on, six months after a suit-sizing flap led to an embarrassing cancellation.
• NASA announced on October 4, 2019 that the International Space Station’s two women will pair up for a spacewalk later this month. Astronauts Christina Koch and the newly arrived Jessica Meir will venture out on Oct 21 to plug in new, upgraded batteries for the solar power system.
• It will be the fourth of five spacewalks for battery work. The first is Sunday; Koch will go out with Andrew Morgan.
• Koch was supposed to do a spacewalk with another female crewmate in March. But NASA had to scrap the plan just a few days in advance because there wasn’t enough time to get a second medium-size spacesuit ready.
• The second medium was put together on board in June.

• Inexperienced Sri Lanka stunned Pakistan by 64 runs in the first Twenty20 international in Lahore on October 5, 2019, taking a 1-0 lead in the three-match series.
• A heavy presence of army personnel and police was seen in and around the Gaddafi Stadium who provided security to the players and f ans.
• Sri Lanka scored 165-5 in their 20 overs with Danushka Gunathilaka scoring 57 off 38 balls, including a six and eight boundaries, for which he was awarded the Man of the Match award. Teenage Pakistan paceman Mohammad Hasnain took a hat-trick, finishing with 3-37.
• Pakistan were then bowled out for only 101 in 17.4 overs with Nuwan Pradeep and Isuru Udana taking three wickets apiece.

• Dalilah Muhammad of the United States stormed to a world record-breaking victory in the 400 metres hurdles as hosts Qatar celebrated a gold medal for high jumper Mutaz Essa Barshim here at the World Athletics Championships on October 4, 2019.
• On a night of high drama played out before a rare packed house at the Khalifa Stadium, Muhammad broke the world record for the second time this year as she powered home to win in 52.16 seconds.
• The 29-year-old Olympic champion took gold ahead of compatriot Sydney McLaughlin, while Jamaica`s Rushell Clayton took the bronze. 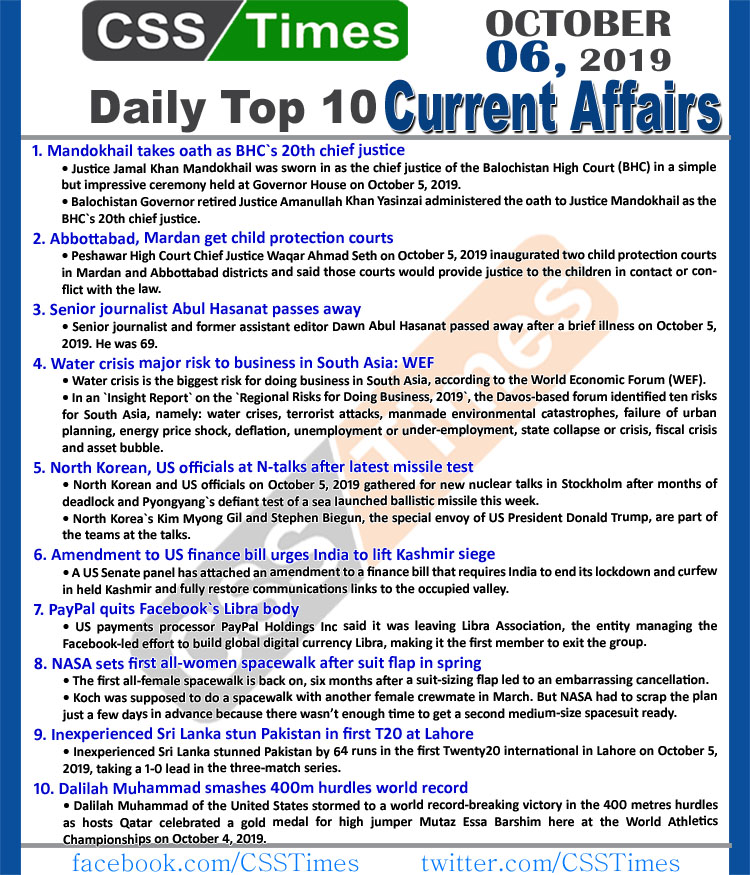