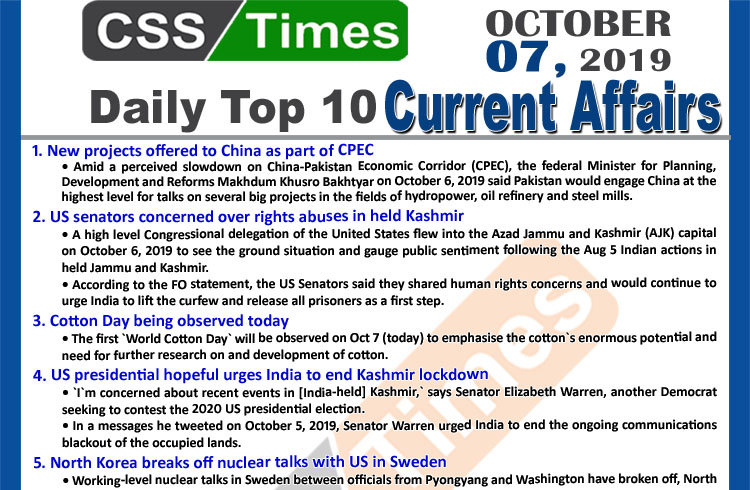 1. New projects offered to China as part of CPEC

• Amid a perceived slowdown on China-Pakistan Economic Corridor (CPEC), the federal Minister for Planning, Development and Reforms Makhdum Khusro Bakhtyar on October 6, 2019 said Pakistan would engage China at the highest level for talks on several big projects in the fields of hydropower, oil refinery and steel mills.
• Mr Bakhtyar said Pakistan would start formal negotiations on additional projects, including a major overland LNG terminal, 7,000-megawatt Bunji hydropower project, Pakistan Steel Mills, oil refineries as well as joint ventures in businesses and science and technology, for agreements.
• `All the existing projects under the CPEC portfolio have been streamlined and there is no slowdown anywhere, the minister said in his opening statement.
• `In particular, about 4,300MW of energy projects are currently under construction and additional 2,500MW projects are in the planning phase,` he said, apparently in reference to recent reports that the $52bn bilateral arrangement had slowed down after Islamabad`s renewed engagements with the United States and the International Monetary Fund.

2. US senators concerned over rights abuses in held Kashmir

• A high level Congressional delegation of the United States flew into the Azad Jammu and Kashmir (AJK) capital on October 6, 2019 to see the ground situation and gauge public sentiment following the Aug 5 Indian actions in held Jammu and Kashmir.
• During the visit, Senators Christopher J. Van Hollen and Margaret C. Hassan, along with their staffers and US Ambassador Paul Jones, calle d on AJK President Sardar Masood Khan and Prime Minister Raja Farooq Haider.
• They attended a briefing by a senior army official on the current situation along the Line of Control (LoC), said the AJK government and the ministry of foreign affairs in separate statements.
• According to the FO statement, the US Senators said they shared human rights concerns and would continue to urge India to lift the curfew and release all prisoners as a first step.
• They also expressed their resolve to remain engaged for the resolution of the dispute.

• The first `World Cotton Day` will be observed on Oct 7 (today) to emphasise the cotton`s enormous potential and need for further research on and development of cotton.
• Cotton is considered as the lifeline of Pakistan`s economy. However, the cotton production in the country is decreasing, as during 2018-19 it was 9.8 million bales which was below 17.5per cent over the last year`s output of around 12m bales.
• The UN Conference on Trade and Development (UNCTAD) is founding partner of World Cotton Day, alongside the Food and Agriculture Organisation, the International Cotton Advisory Committee, the International Trade Centre and the World Trade Organisation. Through its technical cooperation work, UNCTAD has assisted cotton-producing countries to improve their yields, meet international standards and attract investments in value-added industries

• `I`m concerned about recent events in [India-held] Kashmir,` says Senator Elizabeth Warren, another Democrat seeking to contest the 2020 US presidential election.
• In a messages he tweeted on October 5, 2019, Senator Warren urged India to end the ongoing communications blackout of the occupied lands.
• `The US-India partnership has always been rooted in our shared democratic values,` she wrote. `I`m concerned about recent events in Kashmir, including a continued communications blackout and other restrictions.
• Senator Warren also attached an article about the situation in occupied Kashmir to her tweet and reminded India that `the rights of the people of Kashmir must be respected` On Aug 5, India annexed occupied Kashmir by withdrawing a constitutional guarantee of its autonomy and stripped the residents of their basic rights. The strict lockdown and communications blackout have suffocated the region into silence. And a curfew imposed on Aug 5 has continued now for 63 days.

5. North Korea breaks off nuclear talks with US in Sweden

• Working-level nuclear talks in Sweden between officials from Pyongyang and Washington have broken off, North Korea`s top negotiator said, dashing prospects for an end to months of stalemate.
• The talks, at an isolated conference centre on the outskirts of Stockholm, were the first such formal discussion since US President Donald Trump and North Korean leader Kim Jong Un met in June and agreed to restart negotiations that stalled after a failed summit in Vietnam in February.
• The North`s chief nuclear negotiator, Kim Myong Gil, who spent much of the day in talks with an American delegation, cast the blame on what he portrayed as US inflexibility, saying the other side`s negotiators would not `give up their old view-point and attitude.

• Tunisia`s moderate Islamist party appeared to be heading for victory in parliamentary elections, according to polling agencies, though the rival party of a jailed populist tycoon also claimed to come out on top of October 6, 2019`s voting.
• The election is seen as important for the country`s economic and social stability and as a bellwether for the upcoming presidential runoff between detained magnate Nabil Karoui and an independent law professor supported by the Islamists

• Tenor Marcello Giordani, renowned for a voice of beauty and heft that made him a star at the world`s top opera houses, died October 6, 2019. He was 56.
• Giordani had a heart attack following lunch at his home in Monte Tauro, a suburb of Augusta in Sicily, and could not be revived, his vocal coach, Bill Schuman, said.
• `He said he was thirsty, got up from his chair for some water and collapsed. They had a helicopter-ambulance come in, but he was already gone.` In an era when the Three Tenors waned in the 1990s and 2000s, Giordani was sought after in lyric and later spin to roles.

• Saudi Arabia has lifted some restrictions on women traveling in the ultraconservative kingdom, its tourism authority said on Sunday, with new guidelines allowing women to rent hotel rooms without a male guardian`s presence, and foreign men and women to share a room without proof of marriage.
• The easing of stringent regulations governing social interactions comes after Riyadh launched its first tourist visa scheme, as part of efforts to open up the country to foreign visitors and diversify its oil-reliant economy.
• The Saudi Commission for Tourism & National Heritage posted the new requirements on Twitter on Sunday, confirming a Friday report by the Saudi daily Okaz.

• Israeli archaeologists on October 6, 2019 unveiled the remains of a 5,000-year-old city they said was among the biggest from its era in the region, including fortifications, a ritual temple and a cemetery.
• `We have here an immense urban construction, planned with streets that separate neighbourhoods and public spaces, Yitzhak Paz of the Israel Antiquities Authority said at the site near the Mediterranean in the country`s centre.
• He called it a major discovery in the region from the Bronze Age.
• The archaeological site known as En Esur `is the largest site and the most important from that era` in the region, said Itai Elad, another archaeologist overseeing the excavation.

• Novak Djokovic couldn`t have asked for a better tournament debut in Tokyo.
• Playing in the Japanese capital for the first time, Djokovic beat Australian qualifier John Millman 6-3,6-2inthefinal of the Japan Open on October 6, 2019, marking the 10th time the Serbian has lifted a trophy on his main draw debut at a tourlevel event. The top seeded Serb needed only 69 minutes to dispatch Millman who was playing in his maiden ATP 500 final and the 32-year-old won the title without dropping a set in the tournament. 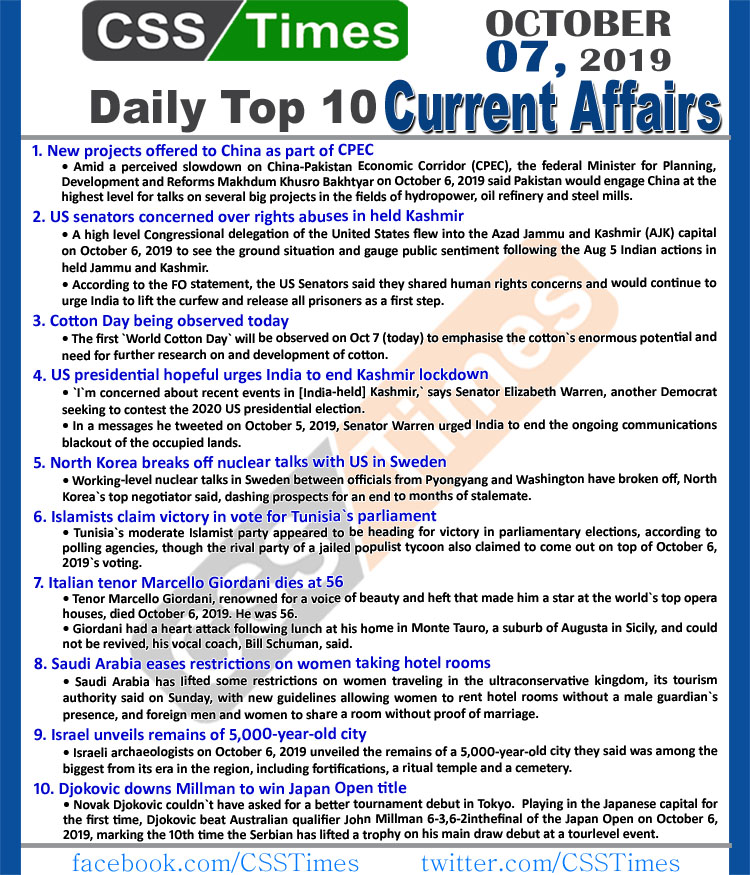