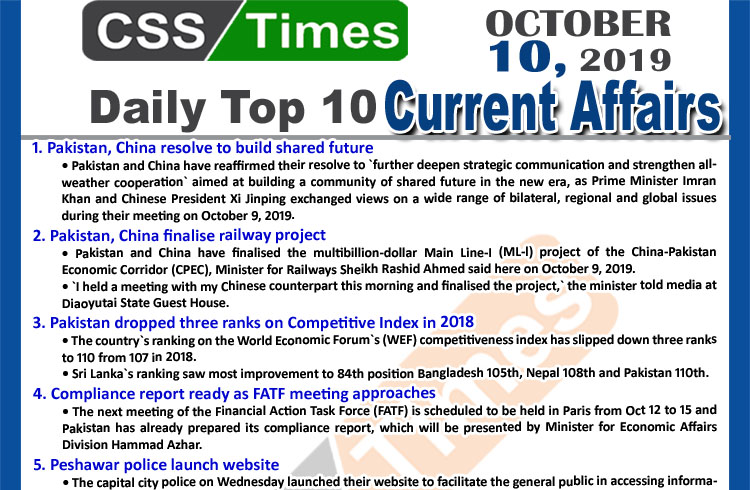 • Pakistan and China have reaffirmed their resolve to `further deepen strategic communication and strengthen all-weather cooperation` aimed at building a community of shared future in the new era, as Prime Minister Imran Khan and Chinese President Xi Jinping exchanged views on a wide range of bilateral, regional and global issues during their meeting on October 9, 2019.
• At the meeting held at the People`s Great Hall of China, the Chinese president extended Beijing`s `unwavering support to Pakistan`s sovereignty and territorial integrity`.
• Recalling the Joint Statement of Nov 4, 2018, which outlined the important consensus between Pakistan and China, the two sides reaffirmed their support on issues concerning each other`s core interests.
• The Chinese president, who is scheduled to meet Indian Prime Minister Narendra Modi in Chennai later this week, told Mr Khan that he was watching the situation in Kashmir very closely and would support Pakistan `on all issues of its core national interest`.
• Tensions over Kashmir have risen sharply since Aug 5 when New Delhi revoked the autonomy of the disputed region and imposed a curfew.

• Pakistan and China have finalised the multibillion-dollar Main Line-I (ML-l) project of the China-Pakistan Economic Corridor (CPEC), Minister for Railways Sheikh Rashid Ahmed said here on October 9, 2019.
• `I held a meeting with my Chinese counterpart this morning and finalised the project,` the minister told media at Diaoyutai State Guest House.
• Mr Ahmed is pan of Prime Minister Imran Khan`s delegation currently visiting China.
• While expressing gratitude to Prime Minister Imran Khan for taking great interest in the project, he said the ML-1, an important project for the Pakistan Railways, had taken shape after 14 years.

• The country`s ranking on the World Economic Forum`s (WEF) competitiveness index has slipped down three ranks to 110 from 107 in 2018.
• The ranking, based on the outcome of executive surveys as well as the statistics from international organisations, deteriorated following the country`s poor performance in the areas of press freedom, life expectancy, corruption, governance, innovation, productivity and human development. The competitiveness index is part of the Global Competitiveness Report, released by Mishal Pakistan on October 9, 2019, a local partner institute of the WEF.
• Within the South Asian region, the WEF ranked India at 68th position.
• India has lost ground in the rankings despite a relatively stable score, mostly due to faster improvements of several countries previously ranked lower.
• Further, Sri Lanka`s ranking saw most improvement to 84th position Bangladesh 105th, Nepal 108th and Pakistan 110th.

• The next meeting of the Financial Action Task Force (FATF) is scheduled to be held in Paris from Oct 12 to 15 and Pakistan has already prepared its compliance report, which will be presented by Minister for Economic Affairs Division Hammad Azhar.
• The Pakistani delegation is scheduled to leave for France on Oct 13 as Pakistan`s case will be taken up on Oct 14 and 15.
• Meanwhile, a report finalised by the Securities and Exchange Commission of Pakistan (SECP) on October 9, 2019 has said that the comprehensive guideline developed by the Commission has helped financial institutions to generate 219 Suspicious Transactions Reports (STRs) in one year, as compared to 13 STRs in eight years.

• The capital city police on Wednesday launched their website to facilitate the general public in accessing information about the police performance and the criminal elements.
• The website was launched at a ceremony held at the Malik Saad Shaheed Police Lines. Capital city police chief Mohammad Karim Khan launched the website.
• On the occasion, Karim Khan told reporters that the website would not only facilitate general public in getting necessary information about city police but also data of criminals. He said people could also lodge complaints against police officials and share tips about anti-social, criminal and other elements using the website

• Two months after Pakistan specified about 200 accounts that were suspended by Twitter for posting content about Kashmir, the government has made headway in its negotiations on the matter with the micro-blogging website.
• In August, several users complained that their accounts or tweets were suspended or withheld for posting about events in India held Kashmir. The claim came from journalists, activists, government officials and fans of the military tweeting in support of Kashmir freedom. Simultaneously, #StopSuspendingPakistanis was trending on Twitter in Pakistan.
• The government then specified about 200 accounts that were suspended, accusing the platform of aiding India`s quest to silence Kashmiris and their supporters.
• The list of accounts suspended, included Twitter handles run by some government officials. In an Aug 19 letter written to Twitter vice president, Trust and Safety, Del Harvey, National IT Board chairman Shabahat Ali Shah said that users from Pakistan were shut down without warning or prior notice.

• Three researchers won the Nobel Chemistry Prize on October 9, 2019 for the development of lithium-ion batteries, paving the way for smartphones and a fossil fuel-free society.
• John Good enough of the United States at 97 the oldest person to be awarded a Nobel prize Britain`s Stanley Whittingham, and Japan`s Akira Yoshino will share the nine million Swedish kronor (about $914,000 or 833,000 euros) prize equally, the Royal Swedish Academy of Sciences said.
• `This lightweight, rechargeable and powerful battery is now used in everything from mobile phones to laptops and electric vehicles…

• Turkey launched a military operation against Kurdish fighters in north east Syria on October 9, 2019 just days after US troops pulled back from the area, with warplanes and artillery striking militia positions in several towns in the border region.
• Turkish President Tayyip Erdogan, announcing the start of the action, said the aim was to eliminate what he called a `terror corridor` on Turkey`s southern border, but European countries immediately called on Ankara to halt the operation.
• Thousands of people fled the Syrian town of Ras al Ain towards Hasaka province, held by the Kurdish-led Syrian Democratic Forces.
• The Turkish air strikes had killed two civilians and wounded two others, the SDF said.

• The Pakistan camp has loads of work to do in every department to get in some sort of shape before next year`s ICC T20 World Cup, it was amply proven here on Wednesday night.
• The clueless Pakistan, ironically leading the ICC T20 rankings currently, suffered an unbelievably embarrassing Twenty20 International series whitewash at the hands of a young-and inexperienced Sri Lankan side who recorded a 13-run victory in front of a stunned crowd at the Gaddafi Stadium.
• Having already lost the series, Sarfraz Ahmed and his demoralised men badly needed a consolation win. It was not to be. Wrist spinner Wanindu Hasaranga once again tormented the hosts with a three-wicket burst.

• The United States women cruised to their fifth consecutive team title at the gymnastics world championships in Stuttgart, with Simone Biles becoming the event`s most decorated woman.
• The Americans hardly made a mistake in the finals, with Biles helping them to a score of 172.330 -5.801 points more than second-placed Russia.
• Italy (164.796) took third spot for its first world team medal since 1950, while China slipped off the podium for the first time since 2003.
• Biles secured her 21st world medal, overtaking Russia`s Svetlana Khorkina for the women`s record.
• Only Vitaly Scherbo of Belarus has won more world medals with 23, which Biles could surpass by the end of the individual events this week. 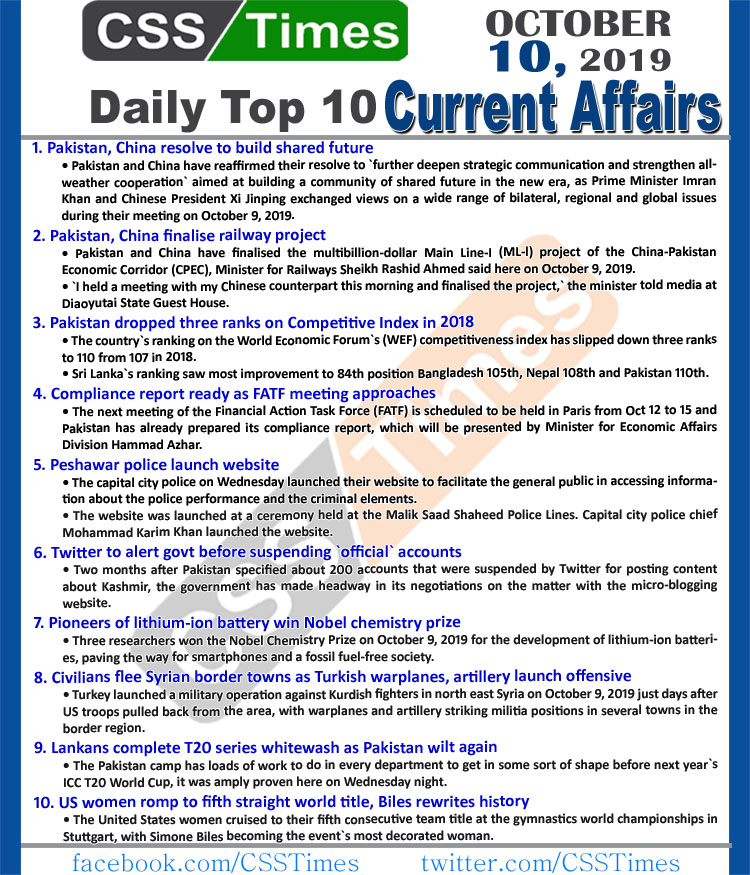