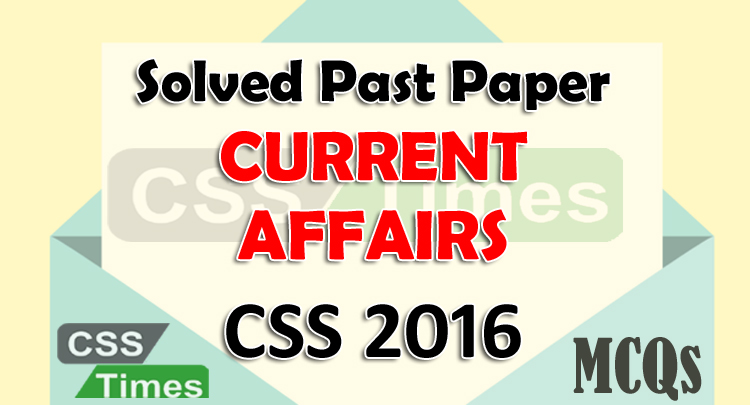 1) “The Reconstruction of Religious Thought” written by
(a) Ahmed Ali
(b) Allama Muhammad Iqbal
(c) Javed Majeed
(d) None of these
Answer: (b)
Explanation: The Reconstruction of Religious Thought in Islam (1930) is Muhammad Iqbal’s major philosophic work: a series of profound reflections on the perennial conflict among science, religion, and philosophy, culminating in new visions of the unity of human knowledge, of the human spirit, and of God.

2) The World’s largest democracy is
(a) Brazil
(b) United Kingdom
(c) India
(d) None of these
Answer: (c)
Explanation: With 1267 million inhabitants, of which 834 million can vote, India is the largest democracy in the world. Despite India’s linguistic and religious diversity, the 2014 general elections have given the newly elected Prime Minister, Narendra Modi, a strong mandate.
For many years, India has been dubbed the world’s biggest democracy, based on the country’s over 1 billion people. But that’s just not true, argues an op-ed in the Global Times, a Chinese state-run tabloid. In fact, that title belongs to China, says Han Zhen, head of Beijing Foreign Studies University. China’s democracy is not only about a right to vote. It’s also about democratic consultations on the economy, politics, culture, and various aspects of society.

4) National anthem composed by
(a) Hafeez Jullundhri
(b) A. R. Ghani
(c) Ahmad G. Chagla
(d) None of these
Answer: (c)
Explanation: Ahmed Ghulamali Chagla was born into a prominent family resident in Karachi for over a century. His father, the late Ghulamali Chagla, was one of the first elected Presidents (1921-22) of the Karachi Municipality. He obtained his preliminary education at the Sindh Madrassat-ul-Islam in Karachi. In late 1949, it was announced that the late Shah of Iran was to pay a state visit to Pakistan (the first by any foreign head of state). It was then that Ahmed Ghulamali Chagla was approached by the National Anthem Committee of the Government of Pakistan to compose the tune for the National Anthem – which he did, and it was played for the first time at the Governor-General’s House in Karachi during the Shah’s visit on March 1, 1950! The man who had written the musical composition for the national anthem had by then departed. He died on 5th February 1953, whereas the anthem and its music won approval in 1954.After a lapse of 43 years, it was during Prime Minister Benazir Bhutto’s term in office that the government announced Presidential Award for Mr Ahmed Ali Chagla. His son, Abdul Khaliq Chagla, who lives in Houston, received the award at a ceremony held at Pakistan Embassy in Washington D.C. on 23rd March 1997.

6) Kalabagh Dam is not yet constructed due to
(a) Politically Damaging
(b) Damage Coastal Ecology
(c) Shortage of Cultivable Land
(d) All of the above
Answer: (d)
Explanation: Kalabagh dam does not present itself as a win-win situation. Its viability is premised on water availability figures that are highly questionable. The land constraint precludes substantive increases in cultivable area, additional water notwithstanding. Crop yield increases based on additional water do not account more, higher doses of water are associated with high input use, which degrades both soil, and water quality. Using existing water more efficiently is clearly a better option. Hydel energy is not unequivocally cheaper, given the growing propensity to factor in displacement and environmental costs

7) Largest Arms importer in 2014
(a) North Korea
(b) India
(c) Saudi Arabia
(d) None of these
Answer: (c)
Explanation: Saudi Arabia overtook India in 2014 as the world’s biggest importer of defence equipment, fuelled by tensions in the Middle East. According to a study published Sunday by respected analysts IHS Jane’s.
Saudi Arabia and the United Arab Emirates (UAE) together imported $8.6bn of defence equipment in 2014, more than the imports of Western Europe combined. Pakistan was the tenth largest arms importer in the world in 2015. Pakistan spent $735 million on arms imports in 2015. In comparison, India imported arms worth $3,078m. The largest exporter of arms to Pakistan in 2015 was China, with arms transfers worth $565 million, followed by the United States (US) with $66m in arms transfers.

8) Term intifada means
(a) Territory for peace
(b) Uprising
(c) Freedom
(d) None of these
Answer: (b)
Explanation: An Arabic word meaning uprising, used to mean the Palestinian uprising against Israel beginning in 1987

9) Freedom house NGO Headquarter in
(a) Amsterdam (Netherlands)
(b) Reykjavik (Iceland)
(c) Washington D.C (United States of America)
(d) None of these
Answer: (c)
Explanation: Freedom House is a U.S.-based U.S. Government funded non-governmental organisation (NGO) that conducts research and advocacy on democracy, political freedom, and human rights. Freedom House was founded in October 1941. Headquartered in Washington, D.C., it has field offices in about a dozen countries.

10) Fifth international recognized mode of payment:
(a) British Pound
(b) Chinese Yuan
(c) Swedish Krona
(d) None of these
Answer: (b)
Explanation: The Chinese currency is the fifth most-used currency for international payments, according to Swift, the organization that banks use to coordinate international transactions.

11) Who is the President of the Asian Infrastructure Investment Bank (AIIB)?
(a) Jin Liqun
(b) Danny Alexander
(c) Thierry de Longuemar
(d) None of these
Answer: (a)
Explanation: Jin served as AIIB’s President-designate from September 1, 2015 until his appointment as President on January 16, 2016. Prior to his selection as President-designate, he served as Secretary-General of the Multilateral Interim Secretariat (MIS), the entity tasked with preparing the legal, policy and administrative frameworks and undertaking other preparatory work required for the establishment of AIIB.

13) The Pakistan People’s Party-led government signed the Gwadar agreement with China on
(a) February 18, 2013
(b) September 21, 2010
(c) March 13m 2010
(d) None of these
Answer: (a)
Explanation: On February 18, 2013 the Zardari government transferred operational control of its strategically-located deep-sea port at Gwadar, Balochistan province to China. Gwadar is situated on the Arabian Sea, just 180 nautical miles (330 kilometers) from the Strait of Hormuz, through which a third of the world’s oil supply passes. It offers a prime location to monitor shipping passing through the Strait of Hormuz from the Persian Gulf, as well as access to cheap land routes or Middle East trade through Pakistan into western China and Central Asia. The previous operator, the Port of Singapore Authority (PSA), withdrew after Islamabad refused to provide large land allotments the PSA wanted for development work around the port.

14) India-China Joint Military Training Exercise HAND-IN-HAND 2015 took place at
(a) Baoding Military Academy Baoding, China
(b) Maharashtra Military School Pune, Maharashtra – India
(c) Kunming Military Academy Yunnan – China
(d) None of these
Answer: (b)
Explanation: The Hand-in-Hand joint training exercise is in continuation of the series of joint exercises between both countries. The first exercise in the series was held in China at Kunming in Yunnan province in 2007. The exercise between two neighbours contributes immensely in developing mutual understanding and respect for each other’s military. The last exercise was held in October 2016 at Pune, Maharashtra in India.

15) The Order of the Rising Sun is highest Military Award of
(a) Russia
(b) Japan
(c) South Korea
(d) None of these
Answer: (b)
Explanation: The Orders of the Rising Sun, established in April 10, 1875, was Japan’s first award. It features rays of sunlight radiating from the rising sun. The order is awarded to those who have made distinguished achievements in the following fields: international relations, promotion of Japanese culture, advancements in their field, development in welfare or preservation of the environment

16) Pakistan’s first communications satellite, the PakSat-1R, was launched in
(a) April 2010
(b) January 2012
(c) August 2011
(d) None of these
Answer: (c)
Explanation: Pakistan’s first communications satellite PAKSAT-1R, which is a part of Pakistan’s Space Programme-2040, was launched in August on board China’s Satellite Launch Vehicle from the Xichang Satellite Launch Centre.

17) What was the old name of Sri Lanka?
(a) Serendib
(b) Ceylon
(c) Lankadeepa
(d) All of the above
Answer: (d)
Explanation: Known as Lamka, Lankadeepa, taprobane… etc In ancient times, Sri Lanka was known by a variety of names: ancient Greek geographers called it Taprobane and Arabs referred to it as Serendib (the origin of the word “serendipity”). Ceilão was the name given to Sri Lanka by the Portuguese when they arrived on the island in 1505, which was transliterated into English as Ceylon. Sri Lanka, officially the Democratic Socialist Republic of Sri Lanka known as Ceylon before 1972 is an island nation in South Asia, located about 31 kilometers (18½ mi) off the southern coast of India. Originally known as Heladiva, it is home to around twenty million people.

18) First secretary General of UN was
(a) Gladwyn Jebb (United Kingdom)
(b) U Thant (Burma)
(c) Trygve Lie (Norway)
(d) None of these
Answer: (c)
Explanation: Norwegian lawyer and politician Trygve Lie was the United Nations first Secretary General. He held the post for seven years, from 1946 to 1953, and famously described it as “the most difficult job in the world”. In the aftermath of the Second World War and at the onset of the Cold War, Lie sought to make his office a “source for peace”. Trygve Lie was elected United Nations Secretary General on February1, 1946 and installed a day later.
Trygve Lie’s vision for peace“The world can never accept the thesis of despair -the thesis of irrevocable and irreconcilable conflict.” Trygve Lie, July 20, 1950.
Trygve Halvdan Lie died on December 30, 1968 of a heart attack. He was 72 years old.

19) Pakistan lunched its first satellite with the collaboration of China in 1990 was
Al-Badr
(a) Paksat 1R
(b) Badr-I
(c) Rehbar-I
(d) None of these
Answer: (b)
Explanation: Benazir Bhutto established the National Development Complex and the University Observatory at Karachi University and expanded facilities for space research. Pakistan’s first military satellite, Badr-I, was also launched under her government through China, while the second military satellite Badr-II was completed during her second term. The Badr-I was Pakistan’s first indigenously developed and manufactured digital communications and an experimental artificial satellite which was launched into low Earth orbit by Pakistan on 16 July 1990 With launching of Badr-I, Pakistan became the first Muslim country to launch and place a satellite in Earth’s orbit. She declared 1990 a year of space in Pakistan and conferred national awards on scientists and engineers who participated in the development of this satellite. In the 1980s, Benazir Bhutto started aerospace projects such as Project Sabre II, Project PAC, Ghauri project under Dr. Abdul Qadeer Khan in 1990 and the Shaheen programme in 1995 under Dr. Samar Mubarakmand.

20) Pakistan and Russia signed a landmark defence agreement on
(a) 19 August 2015
(b) 21 July 2014
(c) 29 August 2015
(d) None of these
Answer: (a)
Explanation: Pakistan and Russia have signed a landmark defence deal which had taken place in 2014. Earlier in November 2014, both countries had signed a bilateral defence cooperation agreement to strengthen military-to-military relations between them.