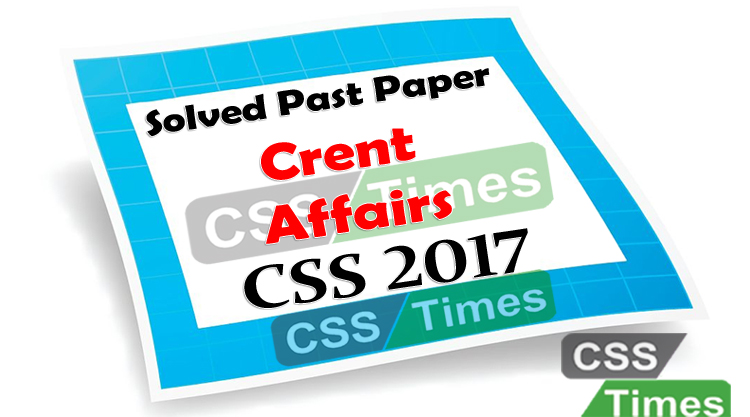 (a) Poland (b) Romania
(c) Russia (d) None of these
Answer: (c)
Explanation: The 2018 FIFA World Cup will be the 21st FIFA World Cup, a quadrennial international football tournament contested by the men’s national teams of the member associations of FIFA. It is scheduled to take place in Russia from 14 June to 15 July 2018, after the country was awarded the hosting rights on 2 December 2010.

(a) 27 (b) 26
(c) 28 (d) None of these
Answer: (c)
Explanation: The European Union (EU) comprises 28 member states. In June 2016, the United Kingdom held a referendum on membership of the EU, resulting in 51.89% of votes cast in favour to leaving. Prime Minister Theresa May invoked Article 50 on 29 March 2017 to formally initiate the withdrawal process.

(a) 1947 – 1991 (b) 1945-1989
(c) 1962-1991 (d) None of these
Answer: (a)
Explanation: The Cold War began a long period of rivalry (1947-1991) which pitted the U.S. against the Soviet Union and their respective allies and determined international relations for almost half a century. The Cold War was fought on the political, economic, and propaganda fronts. The Cold War was to dominate international affairs for decades and many major crises occurred – the Cuban Missile Crisis, Vietnam, Hungary and the Berlin Wall being just some. For many, the growth in weapons of mass destruction was the most worrying issue.

(a) National Proliferation Treaty (b) New Proliferation Treaty
(c) Non-Proliferation Treaty (d) None of these
Answer: (c)
Explanation: The NPT is a landmark international treaty whose objective is to prevent the spread of nuclear weapons and weapons technology, to promote cooperation in the peaceful uses of nuclear energy and to further the goal of achieving nuclear disarmament and general and complete disarmament. Opened for signature in 1968, the Treaty entered into force in 1970. On 11 May 1995, the Treaty was extended indefinitely. A total of 191 States have joined the Treaty, including the five nuclear-weapon States. More countries have ratified the NPT than any other arms limitation and disarmament agreement, a testament to the Treaty’s significance. Pakistan and India have both refused to sign the NPT.

(a) UK (b) France
(c) Germany (d) None of these
Answer: (b)
Explanation: Agence France-Presse (AFP) is an international news agency headquartered in Paris, France. Founded in 1944, AFP is the third largest news agency in the world, after the Associated Press (AP) and Reuters.

(a) Bern, Switzerland (b) Brussels, Belgium
(c) The Hague, Netherlands (d) None of these
Answer: (c)
Explanation: The International Court of Justice (ICJ) is the principal judicial organ of the United Nations (UN). It was established in June 1945 by the Charter of the United Nations and began work in April 1946. The seat of the Court is at the Peace Palace in The Hague (Netherlands).

8) Oldest satellite site is in:

(a) Kazakhstan (b) Russia
(c) USA (d) None of these
Answer: (a)
Explanation: The Baikonur Cosmodrome was originally constructed by the Soviet Union in the late 1950s as the base of operations for its space program. It is the world’s first and largest operational space launch facility. Both Sputnik 1, the first artificial satellite, and Vostok 1, the first manned spaceflight, were launched from Baikonur. The launch pad used for both missions was renamed Gagarin’s Start in honor of Russian Soviet cosmonaut Yuri Gagarin, pilot of Vostok 1 and first human in space.

(a) Theresa Mary May (b) John Bercow
(c) Queen Elizabeth II (d) None of these
Answer: (c)
Explanation: Elizabeth II became queen of the United Kingdom of Great Britain and Northern Ireland in 1952. Elizabeth I was Queen of England and Ireland from 1558 to 1603. Through her parents and grandparents, Elizabeth II can trace her ancestors back long before Elizabeth I!
Queen Elizabeth’s father was King George VI. When he died in February 1952 Elizabeth became Queen. Her coronation was on 2 June 1953.Queen Elizabeth II is one of the most famous women in the world. She has visited many countries and met many world leaders. She has probably travelled more miles than any king or queen in history. 2012 marks her 60th year as Queen. Only Queen Victoria has had a longer reign (63 years 216 days).

10) Country that once was the colony of UK:

(a) Thailand (b) Burma
(c) Vietnam (d) None of these
Answer: (b)
Explanation: British rule in Burma lasted from 1824 to 1948, from the Anglo-Burmese Wars through the creation of Burma as a province of British India to the establishment of an independently administered colony, and finally independence. After three Anglo-Burma Wars (1825, 1852 and 1885) Burma was conquered and transformed into a British colony. Burma became an official colony on January 1, 1886. The British ruled Burma as a part of India from 1919 until 1937. In 1937, Burma was made a crown colony of Britain. Britain in part used Burma as a buffer zone between India and the rest of Asia

(a) Wimbledon (b) Rotterdam
(c) Acer Arena (d) None of these
Answer: (a)
Explanation: The Championships, Wimbledon, commonly known simply as Wimbledon, is the oldest tennis tournament in the world, and is widely considered the most prestigious. It has been held at the All England Club in Wimbledon, London, since 1877 and is played on outdoor grass courts.

12) Bishkek is the capital of:

(a) Tajikistan (b) Kyrgyzstan
(c) Turkmenistan (d) None of these
Answer: (b)
Explanation: Bishkek formerly Pishpek and Frunze, is the capital and largest city of the Kyrgyz Republic. In 1991 the Kyrgyz parliament changed the capital’s name to “Bishkek”. Bishkek is also the country’s financial center, with all of the country’s 21 commercial banks headquartered there. During the Soviet era, the city was home to a large number of industrial plants, but most have been shut down since 1991 or now operate on a much reduced scale. One of Bishkek’s largest employment centers today is the Dordoy Bazaar open market, where many of the Chinese goods imported to CIS countries are sold.

13) Last census in Pakistan was held in:

(a) 1980 (b) 1998
(c) 2017 (d) None of these
Answer: (b)
Explanation: The last census in Pakistan was conducted in 1998 since then there are mere estimates that Pakistan works with for policy making. Constitutionally Pakistan is bound to conduct census every 10 years. The March 2017 census are taking place after a gap of two decades. Pakistan has a long history of Census taking and the first regular Population Census in the area now comprising Pakistan was held in 1881. Since then regular censuses have been conducted after every ten years in the year ending at one. After independence, the first census of Pakistan was conducted in 1951, the second in 1961 while the third census was held in 1972 instead of 1971 due to political environment in the country and war with India. The fourth census was held in March 1981 and fifth one which was due in 1991 could be held in March, 1998 due to specific circumstances.

(a) Anwar Sadat (b) Shirin Ebadi
(c) Muhammad Abdus Salam (d) None of these
Answer: (a)
Explanation: Anwar el-Sadat was the one-time president of Egypt (1970-1981) who shared the 1978 Nobel Peace Prize for establishing peace agreements with Israel.

15) Objectives Resolution was presented by:

(a) Mian Muhammad Iftikharuddin (b) Liaquat Ali Khan
(c) Shabir Ahmed Usmani (d) None of these
Answer: (b)
Explanation: The Objectives Resolution was a resolution adopted on 12 March 1949 by the Constituent Assembly of Pakistan. The resolution, proposed by the Prime Minister, Liaquat Ali Khan, proclaimed that the future constitution of Pakistan would not be modeled entirely on a European pattern, but on the ideology and democratic faith of Islam. While discussing rights of religious minorities, Chandra Mandal opposed the resolution by saying that ‘why ulemas are insisting on this principle of Islam whereas India has Pandits but they did not demand things like that. Individual do have religion but state had not. Mian Muhammad Iftikharuddin was the only Muslim member in the house who opposed the resolution.

16) The world’s largest producer of cotton:

(a) China (b) Pakistan
(c) USA (d) None of these
Answer: (a)
Explanation: With around 100,000 farmers cultivating cotton, China is the biggest cotton producing country. China has 7,500 textile companies, which produce US $73 billion of cotton cloth annual. The cultivation requires moderate rainfall. To save the plant from pests, there is a huge usage of pesticides and fertilizers.

(a) August 11, 1945 (b) August 6, 1945
(c) August 9, 1945 (d) None of these
Answer: (b)
Explanation: On August 6, 1945, during World War II (1939-45), an American B-29 bomber dropped the world’s first deployed atomic bomb over the Japanese city of Hiroshima. The explosion wiped out 90 percent of the city and immediately killed 80,000 people; tens of thousands more would later die of radiation exposure. Three days later, a second B-29 dropped another A-bomb on Nagasaki, killing an estimated 40,000 people. Japan’s Emperor Hirohito announced his country’s unconditional surrender in World War II in a radio address on August 15, citing the devastating power of “a new and most cruel bomb.”

(a) Economic failure (b) Perestroika and Glasnost
(c) Nationalist Movements (d) None of these
Answer: (a)
Explanation: Described as the greatest geopolitical catastrophe of the 20th century by the current president of Russia Vladimir Putin the collapse of the Soviet Union has caused profound changes in global political and economic affairs, impacting the lives of hundreds of millions of people. Economic factors have played an immense role in the collapse of the Soviet Union and this role relates to the negative impacts of centrally-planned economic system. Substantial disadvantages associated with centrally-planned economic system include inefficiencies associated with resource distribution, lack of economic stability and lack of motivation for quality improvement due to the absence of competition and each of these disadvantages have played their part.

(a) Pakistan (b) Saudi Arabia
(c) Russia (d) None of these
Answer: (c)
Explanation: Proven Reserves: 47,800,000,000,000: Over 25% of European Union’s natural gas demands are met by Russia alone, while its own consumption is a whopping 457 bcm per year. With 24% of the world’s proven reserves, the country tops the list of countries with highest natural gas reserves. Iran, Russia, and Qatar, which together held nearly half the world’s proven reserves

(a) Mediterranean Sea and Black Sea (b) Pacific and the Atlantic Ocean
(c) Mediterranean Sea and the Red Sea (d) None of these
Answer: (c)
Explanation: The Suez Canal is an extremely crucial and famous shipping canal allowing the passage of vessels between the Mediterranean and the Red Sea. The canal was constructed in the mid-1800s and as has been recognized as a maritime route to be open at all times, to shipping vessels of all countries in order to facilitate continuity in maritime trade operations irrespective of global conflicts.