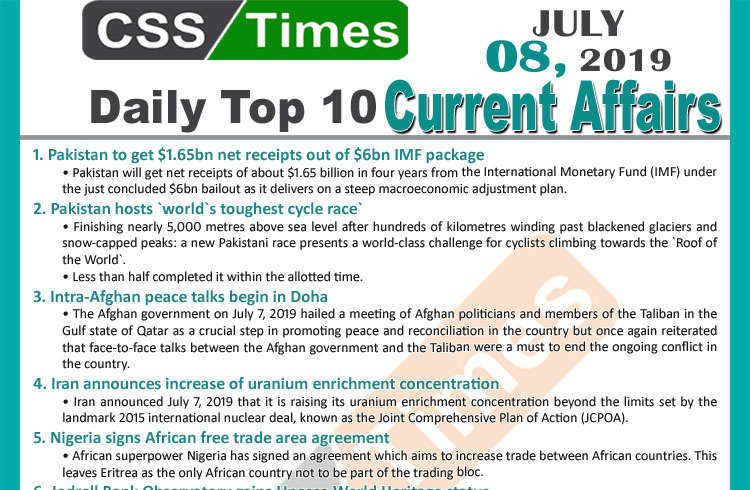 • Pakistan will get net receipts of about $1.65 billion in four years from the International Monetary Fund (IMF) under the just concluded $6bn bailout as it delivers on a steep macroeconomic adjustment plan.
• Beginning this year Pakistan will receive a total of $6bn in about three years ending 2021-22 from the IMF, while it has to repay about $4.355bn in four years ending 2022-23,showing net receipts of $1.65bn.
• The government is expected to receive first disbursement of about $1bn this week under the $6bn Extended Fund Facility (EFF) that would boost the foreign exchange reserves in the short term, but its repayment obligations under the previous $6.4bn EFF have already begun.
• The Fund`s previous EFF had envisaged a repayment period ranging between four-and-a-half years and 10 years, with repayments in 12 equal semi-annual installments. The 12 disbursements by the IMF had started during the fiscal year 2013-14 and completed in September 2016. The repayments under that programme started in March 2019 with $532 million, including $70m interest charges, and will continue until June 2026.

• Finishing nearly 5,000 metres above sea level after hundreds of kilometres winding past blackened glaciers and snow-capped peaks: a new Pakistani race presents a world-class challenge for cyclists climbing towards the `Roof of the World`.
• The Tour de Khunjerab its name a homage to its more famous French counterpart, which began on July 6, 2019 is still many years away from being another Big Loop, but with a solid claim to being the highest cycling race in the world, it has a lot to offer a certain type of athlete.
• In the last week of June, some 88 cyclists, including two teams from Afghanistan and Sri Lanka as wellas solo participants from Spain and Switzerland, took part in its second edition.
• Less than half completed it within the allotted time.

• The Afghan government on July 7, 2019 hailed a meeting of Afghan politicians and members of the Taliban in the Gulf state of Qatar as a crucial step in promoting peace and reconciliation in the country but once again reiterated that face-to-face talks between the Afghan government and the Taliban were a must to end the ongoing conflict in the country.
• Almost 50 delegates from Afghanistan and 17 representatives of the Taliban have attended a two-day intra-Afghan dialogue conference in Doha, co-hosted by Germany and Qatar, which kicked off on Sunday.
• “It can be evaluated as a progress [in the peace process] and an opportunity for those Afghans who are present there in the meeting to share their ideas with each other,” President Ghani’s spokesman Sediq Sediqqi told TOLO news.
• The State of Qatar and Germany hope that this conference will contribute to building trust between the main parties representing the vast majority of the people and Afghan society, in order to support peace and stability in Afghanistan and the region in general.

• Iran announced July 7, 2019 that it is raising its uranium enrichment concentration beyond the limits set by the landmark 2015 international nuclear deal, known as the Joint Comprehensive Plan of Action (JCPOA).
• Earlier on the day, Ali Rabiee, the spokesman for Iranian government, said in a live broadcast from state TV that “today, we will start enriching uranium beyond 3.67 percent, and its level of purity depends on our needs. This will happen officially.”
• The announcement was immediately confirmed by the Spokesman for the Atomic Energy Organisation of Iran (AEOI) Behrouz Kamalvandi, who said that the rise of the purity of uranium enrichment from current 3.67 percent to the higher level aims at “meeting the needs of fuel for Iran’s power plants.”

• African superpower Nigeria has signed an agreement which aims to increase trade between African countries. This leaves Eritrea as the only African country not to be part of the trading bloc.
• Nigerian President Muhammadu Buhari signed the landmark agreement at the African Union (AU) summit in Niger. The first step is to cut tariffs for goods from countries within the bloc but the timeframe to do this is yet to be announced.
• The AU says that the African Continental Free Trade Area – called AfCFTA – will create the world’s largest free trade area. It also estimates that implementing AfCFTA will lead to around a 60% boost in intra-African trade by 2022.

• Jodrell Bank Observatory has been declared a UNESCO World Heritage Site. It has been at the forefront of astronomical research since its inception in 1945 and tracked US and Russian craft during the space race.
• The site in Cheshire is part of the University of Manchester. It is dominated by the landmark Lovell Telescope. It joins the ancient Iraqi city of Babylon and other locations that have been added to the prestigious list.
• The UN World Heritage Committee is meeting in Azerbaijan until 10 July to decide on the latest sites to be given the honour – awarded to areas considered to be important for the whole of humanity, which will be protected by international treaties.
• Scientific research began at Jodrell Bank Observatory in 1945 when the physicist Sir Bernard Lovell came to the University of Manchester. The site pioneered the then new science of radio astronomy, which used radio waves instead of visible light to understand the universe.

• Greek Prime Minister Alexis Tsipras conceded defeat on July 7, 2019 after a partial vote count showed opposition conservatives comfortably winning the first parliamentary election since the country emerged from its international bailouts.
• The conservative New Democracy party of Kyriakos Mitsotakis had 39.7 percent of the vote compared to Tsipras`s Syriza party with 31.5 percent after nearly 60 percent of ballots were tallied.
• The result was a stinging blow to Tsipras, who had insisted he could overturn a sizable gap in opinion polls running up to the election, which he asked to hold several months before his term expires in the fall.

8. An earthquake’s impact can be predicted

• Over the next week, Southern California has only a 27% chance of experiencing a third earthquake greater than magnitude 6, but a 96% chance of going through a tremor of magnitude 5 or higher.
• Those precise probabilities were generated by scientists at the United States Geological Survey (USGS), using models based on longstanding principles of seismic behavior and decades of data on aftershocks from earthquakes.
• But the same predictive power does not extend to forecasting when and where earthquakes will strike in the first place, experts acknowledge.

• Eight-time Wimbledon singles champion Roger Federer posted yet more landmarks on July 6, 2019, registering a record 350th win in Grand Slam matches in his 7-5, 6-2, 7-6 (7/4) victory over Lucas Pouille of France and in the process reached the fourth round for an unprecedented 17th time.
• In the other late matches on Saturday, Andy Murray`s hopes of men`s doubles glory ended early as he and French partner Pierre-Hugues Herbert went out in the second round.
• However, he was to end the day on a celebratory note as his star partnership with Serena Williams eased into the second round of the mixed doubles beating Germany`s Andreas Mies and Alexa Guarachi of Chile 6-4, 6-1.

• The United States won a record extending fourth women`s football World Cup title with a 2-0 victory over the Netherlands on July 7, 2019 as second-half goals from Megan Rapinoe and Rose Lavelle confirmed their status as the leading power in the women`s game.
• The defending champions struggled to gain dominance for an hour before a Rapinoe penalty, her sixth goal of the tournament, broke the deadlock and a fine individual effort from Lavelle in the 69th minute put the outcome beyond doubt.
• The Dutch, who are the European champions, ran out of steam after Rapinoe opened the scoring in the 61st minute, having done more than any team to frustrate the Americans. 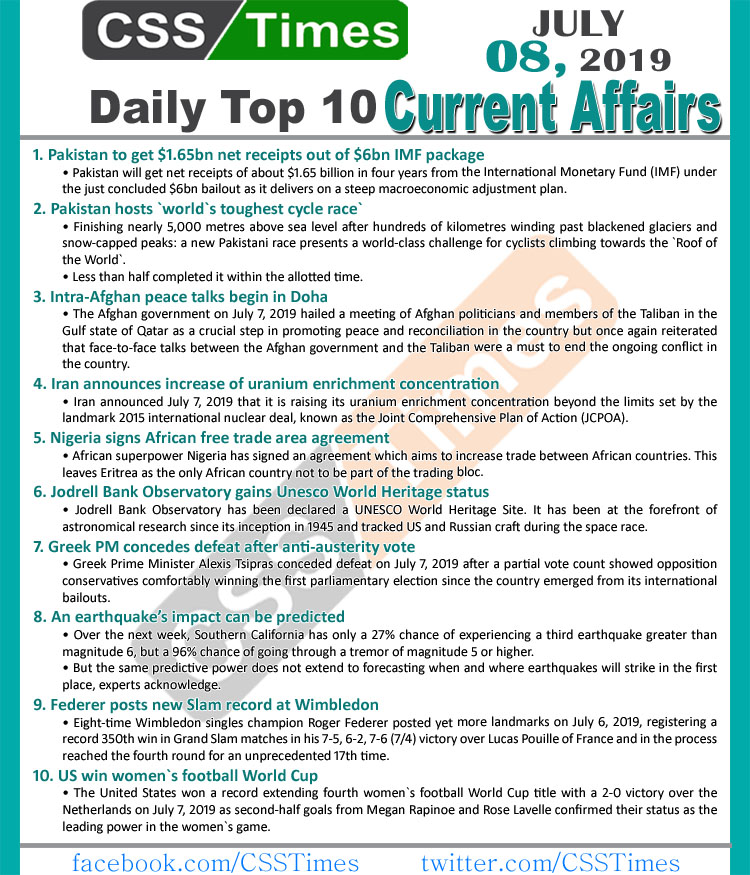