• Pakistan has entered a high tax environment for the foreseeable future with Rs1.56 trillion additional taxes this year, followed by another Rs1.5tr next year and yet another Rs1.31tr the year after, according to a staff report released by the International Monetary Fund (IMF) on July 8, 2019.
• The agreement signed with the IMF by Adviser to the Prime Minister on Finance Abdul Hafeez Shaikh and State Bank of Pakistan Governor Reza Baqir also requires an increase in electricity tariff again in August this year and ensures Rs1.3tr refunds from the provinces out of the National Finance Commission share to honour its commitments with the IMP.
• The projections contained in the document show that the authorities have promised to increase FBR`s total tax collection from Rs3.94tr last year to Rs5.5tr this year and to Rs10.5tr by 2023-24, a cumulative increase of Rs6.564tr in five years. Assuch, the tax-to-GDP ratio is forecast to soar to 15.3 per cent from 10.4pc this year.

2. ADB to give $10bn in five years for development projects

• The Asian Development Bank (ADB) on July 8, 2019 said it planned to extend up to $10 billion indicative lending to Pakistan for various development projects and programmes during the next five years including $2.1bn disbursements during the current Fiscal year.
• The Manila-based lending agency said it had a series of country consultations to formulate a new Country Partnership Strategy (CPS), which will guide ADB`s engagement in the country from 2020 to 2024. The purpose of ADB`s 5-year CPS is to define priorities and to support Pakistan`s development goals. The new strategy will also complement efforts by other development partners.
• `ADB`s partnership strategy will be aligned with the government`s development vision and policies, and is expected to introduce new approaches to development financing in urban services, energy security, transport, agriculture and water resources, education, trade, and tourism, said ADB Country Director for Pakistan Xiaohong Yang.

• President Dr Arif Alvi July 8, 2019 administered the oath of office of the federal minister to Hammad Azhar, previously serving as Minister of State for Revenue.
• The oath taking ceremony was held at the Aiwan-e-Sadr attended by the cabinet members and members of the parliament.

• Major General Khawar Rahman of Army Medical Corps (AMC) has been promoted to the rank of Lieutenant General.
• He has also been appointed as Surgeon General of Pakistan Army, the media wing of Pakistan Army added

• Iran has passed the uranium enrichment cap set in its 2015 nuclear deal, marking the second time in a week that it made good on a promise to reduce compliance with the international pact following the United States’ unilateral exit last year.
• The announcement on July 8, 2019 from Iran’s Atomic Energy Organization came amid growing frustration in Tehran over a failure by the landmark accord’s remaining signatories to deliver on its promised economic benefits.
• Behrouz Kamalvandi, spokesman for the nuclear agency, confirmed Tehran had enriched uranium beyond the 3.67 percent purity that the deal allows, passing 4.5 percent, according to the Iranian students’ news agency ISNA.
• On July 1, Iran passed the uranium stockpile limit permitted by the deal, and officials on July 7, 2019 pledged to keep scaling back their commitments every 60 days unless Britain, China, France, Germany and Russia protected it from the punishing sanctions imposed by the US following its withdrawal.

• Dozens of powerful Afghans resumed talks with the Taliban on July 8, 2019 in Doha, where a possible ceasefire is on the table along with key issues such as women`s rights.
• Stakes are high for the talks which follow a week of US-Taliban negotiations with both sides eyeing a resolution to the bloody 18-year conflict.
• US Secretary of State Mike Pompeo tweeted that the Afghan gathering `has been a long time coming` and praised the country`s `government, civil society, women, and Taliban` for coming together.
• Washington has said it wants to seal a political deal with the Taliban ahead of Afghan presidential polls due in September to allow foreign forces to begin to withdraw.
• Around 70 delegates are attending the two-day gathering which has been organised by Germany and Qatar.

• China’s indigenous “artificial heart” saved two from advanced heart failure, setting a new record as patients survived over 100 days, state-run China Daily reported on July 8, 2019.
• The auxiliary heart device was used in March by the doctors at the TEDA International Cardiovascular Hospital in Tianjin, northeast China.
• A 39-year-old man and a 62-year-old woman, who were diagnosed with advanced dilated cardiomyopathy (DCM) — a cardiovascular condition that enlarges the heart which then cannot pump blood effectively — survived longer than any who had undergone the operation before.
• HeartCon, a cardiovascular assisting device was developed and patented by China exclusively, is claimed to be the first entirely indigenous such device in the country, it was reported

• China has built six National Supercomputing Centers (NSCC) since 2009, serving as a new driver for the country’s innovation, according to the NSCC in north China’s Tianjin Municipality, which celebrated the 10th anniversary of the founding of the center on July 7, 2019.
• Since the establishment of the NSCC in Tianjin was approved by the Ministry of Science and Technology in May 2009, other five supercomputing centers were founded one after another in Shenzhen, Jinan, Changsha, Guangzhou and Wuxi respectively.
• As the first supercomputing center in China, the NSCC in Tianjin is not only where China’s first petaflop supercomputer the Tianhe-1 is located, but also responsible for developing China’s new generation of the exascale supercomputer the Tianhe-3.

• Brazil didn’t need Neymar to win another Copa América title at home. With its injured star watching from the stands at a packed Maracanã Stadium on July 7, 2019, Brazil beat Peru 3-1 to win its first South American title since 2007.
• It was Neymar’s replacement, Everton, who led the team to victory, scoring a goal and setting up another to give Brazil its ninth Copa América trophy, and fifth at home. Gabriel Jesus and Richarlison also scored for Brazil, which has won the title every time it hosted the tournament.
• Neymar, who was ruled out before the tournament because of an ankle injury, sat with his son close to Brazilian president Jair Bolsonaro among the crowd of nearly 70,000 at the Maracanã. “Neymar is extraordinary, he’s a top 3 player,” Tite said. But “with teamwork we stayed strong.”

• Bangladesh will later this month become the first team to tour Sri Lanka since the deadly Easter attacks in which 258 people died, the cricket board said on July 8, 2019.
• Bangladesh will play three One-day Internationals on July 26, 28 and 31 at the Premadasa International Stadium in Colombo, Sri Lanka Cricket (SLC) said in a statement.
• Sri Lanka had previously expected New Zealand to be the first foreign sporting visit, when they arrive next month to play two Tests and three Twenty20 matches.
• Since the suicide bombings on three hotels and three churches by terrorists, Sri Lanka has been under a state of emergency which gives sweeping powers to police and troops to arrest and detain suspects. 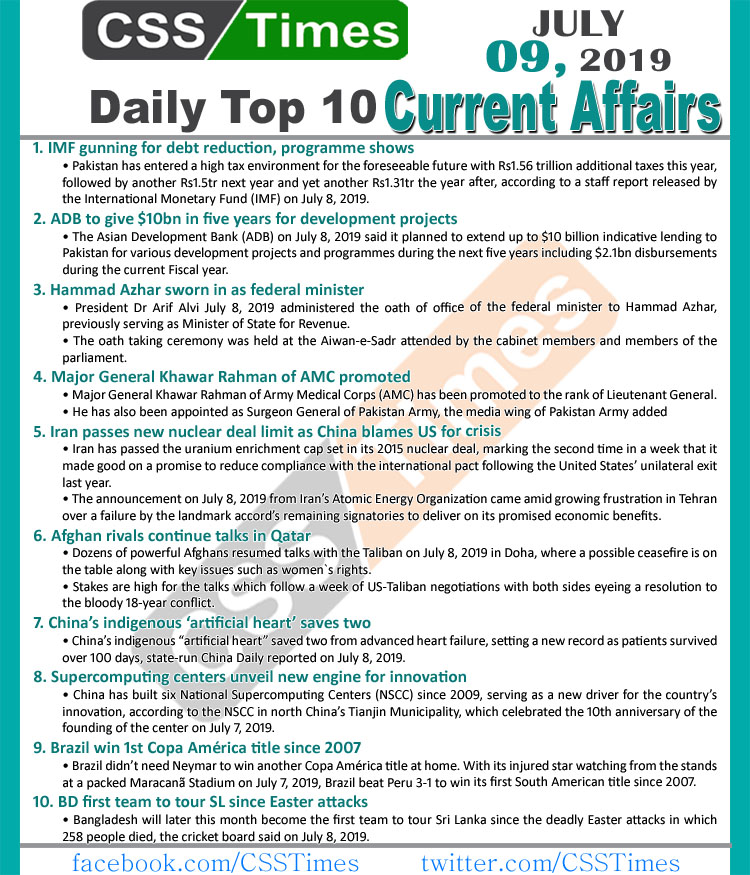