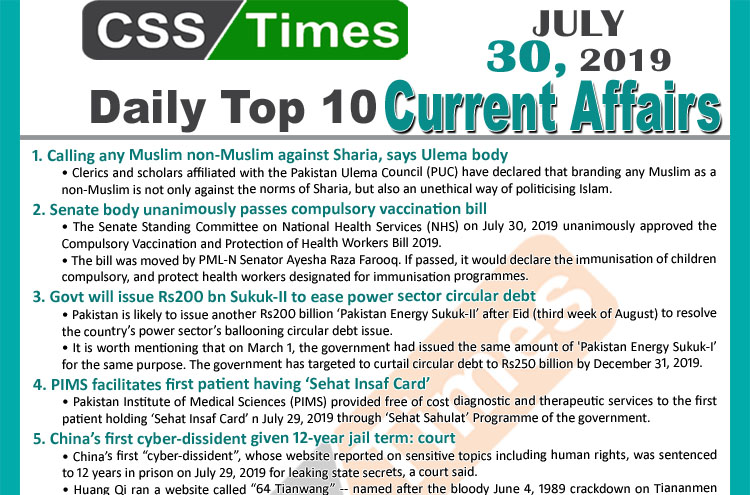 • Clerics and scholars affiliated with the Pakistan Ulema Council (PUC) have declared that branding any Muslim as a non-Muslim is not only against the norms of Sharia, but also an unethical way of politicising Islam.
• PUC chairman Hafiz Tahir Ashrafi said elements using Islam for political purposes or for personal gain were bringing a bad name to clerics as well as Sharia.
• The PUC recently held a conference which drew 1,500 religious scholars from different schools of thought. The conference extended support to the National Action Plan as well as the drive against extremism.
• A resolution adopted at the conference stressed that killing in the name of religion was against the teachings of Quran and Sunnah.
• It called upon clerics and scholars belonging to the four mainstream schools of thought Shia, Barelvi, Deobandi and Ahle Hadis to dissociate themselves from the elements fanning hatred on the basis of religion.

• The Senate Standing Committee on National Health Services (NHS) on July 30, 2019 unanimously approved the Compulsory Vaccination and Protection of Health Workers Bill 2019.
• The bill was moved by PML-N Senator Ayesha Raza Farooq. If passed, it would declare the immunisation of children compulsory, and protect health workers designated for immunisation programmes.
• The draft, which is available with Dawn, says that immunisation has been recognised the world over as the most efficient and cost-effective strategy to control and prevent disease. It proposes that immunisation is the right of every child and the state is responsible for ensuring these services reach every child.
• Any individual who propagates through written or spoken word against vaccination or intimidates or obstructs a designated medical officer or health worker of functions will be liable for up to six months in prison, a fine between Rs25,000 and Rs100,000 or both.
• Children who are not fit for vaccination would have to submit a certificate stating so from the designated medical officer.

• Pakistan is likely to issue another Rs200 billion ‘Pakistan Energy Sukuk-II’ after Eid (third week of August) to resolve the country’s power sector’s ballooning circular debt issue.
• For this purpose to discuss the modalities of the transaction, the Secretary Finance Division held a meeting with the presidents of the commercial banks constituting a consortium led by the Meezan Bank. The other banks include Habib Bank, Bank Alfalah, Bank Islami, Dubai Islamic Bank, Bank Al-Habib, Bank Albaraka, National Bank of Pakistan, United Bank and Faisal Islamic Bank.
• It is worth mentioning that on March 1, the government had issued the same amount of ‘Pakistan Energy Sukuk-I’ for the same purpose. The government has targeted to curtail circular debt to Rs250 billion by December 31, 2019.

• Pakistan Institute of Medical Sciences (PIMS) provided free of cost diagnostic and therapeutic services to the first patient holding ‘Sehat Insaf Card’ n July 29, 2019 through ‘Sehat Sahulat’ Programme of the government.
• The PIMS Executive Director Raja Amjad directed the staff on July 29, 2019 to facilitate a patient Raja Khalid Mehmood having ‘Sehat Insaf Card’.
• The patient availed the facility of ECG (electrocardiogram), angiography and angioplasty free of cost through the ‘Insaf Card’.
• After providing treatment facilities to the first ‘Sehat Insaf’ Card holder, the PIMS ED announced that all patients having the cards would be provided free of cost treatment at PIMS through ‘Sehat Sahulat’ Programme.

• China’s first “cyber-dissident”, whose website reported on sensitive topics including human rights, was sentenced to 12 years in prison on July 29, 2019 for leaking state secrets, a court said.
• Huang Qi ran a website called “64 Tianwang” — named after the bloody June 4, 1989 crackdown on Tiananmen Square pro-democracy protesters.
• His sentence is one of the harshest meted out to a dissident since President Xi Jinping came to power in 2012, according to court records.

• India has inked around Rs1,500 crore deal with Russia to acquire R-27 air-to-air missiles. The missiles will be fitted on SU-30 MKI combat aircraft which will boost the Indian Air Force’s (IAF) capabilities in beyond visual range warfare.
• “A contract has been signed with Russia for acquisition of R-27 air-to-air missile to be fitted on the Su-30 MKI combat aircraft fleet of the Indian Air Force,” government sources told a wire service in New Delhi on July 29, 2019.
• With an extended range, the missiles would give an added capability to the Sukhois to take on enemy aircraft at long ranges, they said.
• The missiles have been acquired fewer than 10-I projects which mandate the three services to maintain critical weapon systems and spares for a specified minimum period, which is known as War Wastage Reserve (WWR).
• In the last 50 days, the Indian Air Force (IAF) has signed deals worth over Rs7,600 crore for acquiring equipment under emergency requirements approved by the Defence Ministry.

• An Indian man who was bitten by a snake got his revenge on the reptile by biting it back and killing it, the man’s father said on July 29, 2019.
• The man, Raj Kumar, was relaxing at home, enjoying a drink on Sunday, when a snake slithered into his house in the northern state of Uttar Pradesh, and bit him, said his father.
• “A snake bit him. So, in turn, he bit it and chewed it into pieces,” said the father, Babu Ram.
• The man’s family took him to hospital where media said his condition was critical. The snake that bit him was reported to have been a rat snake, which experts regard as usually not venomous.

• India`s wild tiger population has increased by more than 30 per cent in the last four years, according to a new census released on July 29, 2019, raising hopes for the survival of the endangered species.
• In what Prime Minister Narendra Modi hailed as a `historic achievement`, the census found 2,967 tigers in the wild across the country, up from 2,226 four year s ago.
• `Some 15 years ago, there was serious concern about the decline in the population of tigers. It was a big challenge for us but with determination, we have achieved our goals.

• Egan Bernal became the first Colombian to win the Tour de France when he retained the overall leader`s yellow jersey after Sunday`s 21st and final stage won by Caleb Ewan of Australia.
• The 22-year-old Bernal, the youngest rider to win the race in 110 years, gave Team Ineos formerly Team Slcy their seventh title in the last eight editions.
• He beat team mate and defending champion Geraint Thomas of Britain by one minute 11 seconds, with Dutchman Steven Kruijswijk coming home third, 1:31 off the pace.

• Olympic champion Dalilah Muhammad smashed one of athletics` oldest world records when she stormed to the women`s 400 metres hurdles title in 52.20 seconds at the United States national championships on July 28, 2019.
• The blistering run shaved more than a tenth of a second from the previous mark of 52.34 seconds set by Russian Yuliya Pechonkina in 2003.
• Teenager Sydney McLaughlin was second in 52.88, just 0.13 shy of her personal best, with Ashley Spencer third in 53.11, as all three runners made the U.S. team for September`s world championships in Doha.
• The first American Olympic gold medalist in the event, shehad entered the American championships with a personal best of 52.64 seconds. 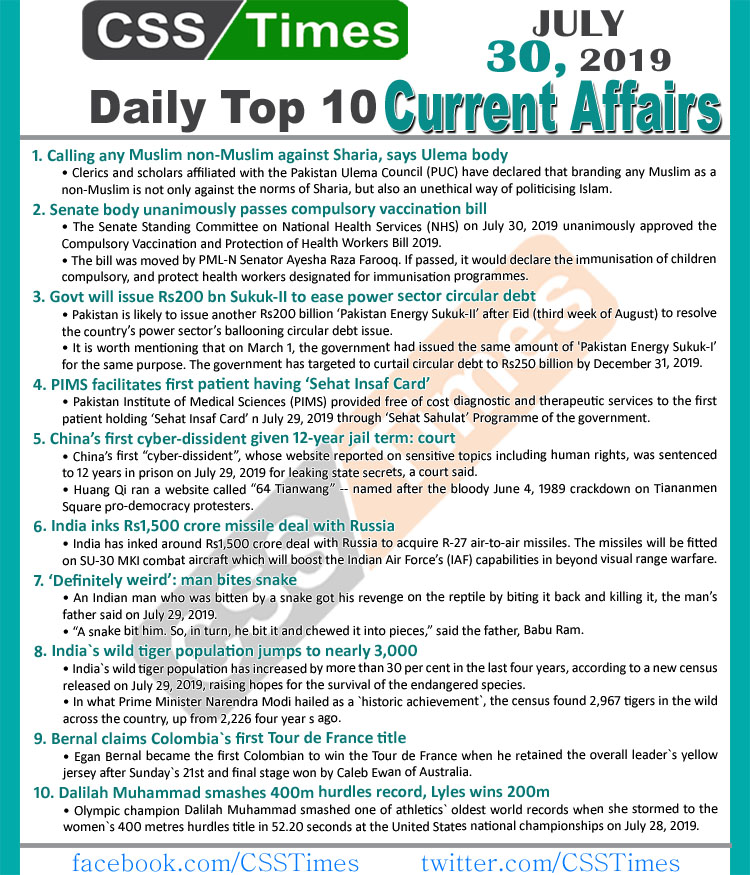