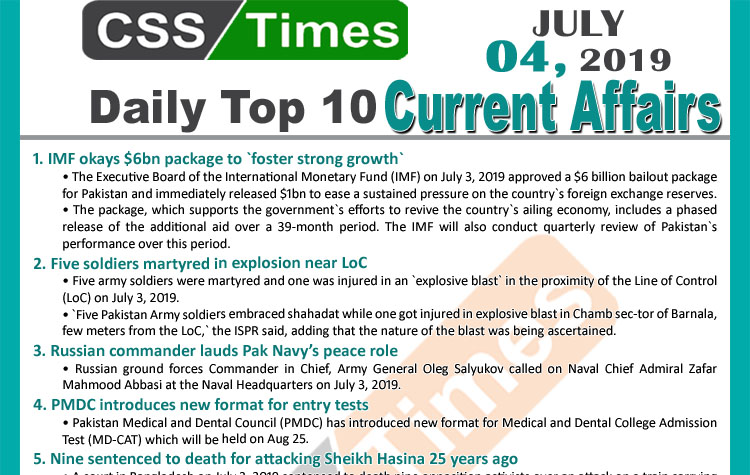 • Five army soldiers were martyred and one was injured in an `explosive blast` in the proximity of the Line of Control (LoC) on July 3, 2019.
• The incident occurred in Chamb sector of Barnala, one of the three tehsils of Bimbher district of Azad Jammu and Kashmir, added the Inter-Services Public Relations (ISPR) in a press release.
• `Five Pakistan Army soldiers embraced shahadat while one got injured in explosive blast in Chamb sec-tor of Barnala, few meters from the LoC,` the ISPR said, adding that the nature of the blast was being ascertained.
• However, military sources told that the casualties had occurred in five to six improvised explosive device blasts around 500-600 metres within the LoC when the soldiers were on a routine patrol in the afternoon.

• Russian ground forces Commander in Chief, Army General Oleg Salyukov called on Naval Chief Admiral Zafar Mahmood Abbasi at the Naval Headquarters on July 3, 2019.
• The Naval Chief apprised the dignitary of Pakistan Navy’s steps toward regional maritime security patrol in the Indian Ocean. The Russian Commander in Chief lauded the role of Pakistan Navy in maintaining peace and security in the region.

• Pakistan Medical and Dental Council (PMDC) has introduced new format for Medical and Dental College Admission Test (MD-CAT) which will be held on Aug 25.
• A format for the entry test was prepared in consultation with the subject experts nominated by admitting universities.
• The format was approved by the council and it was directed all admitting universities to follow the format.
• Moreover, universities have been directed to make arrangements so that students could be aware of new format.

5. Nine sentenced to death for attacking Sheikh Hasina 25 years ago

• A court in Bangladesh on July 3, 2019 sentenced to death nine opposition activists over an attack on a train carrying current Prime Minister Sheikh Hasina 25 years ago.
• A further 25 activists from the main opposition Bangladesh Nationalist Party (BNP) were jailed for life and 13 other members jailed for 10 years by the court in Pabna, prosecutor Akhtaruzzaman Mukta said.

6. Iran will start enriching uranium at higher levels after this weekend

• Iran will begin enriching uranium at a higher level than what is allowed under the 2015 nuclear deal within days, Iranian President Hassan Rouhani said.
• The announcement comes two days after Iran announced it had exceeded limits on its low-enriched uranium stockpiles. Under the 2015 deal, Iran agreed to slash its stockpile of enriched uranium by 90%, and cap uranium enrichment at 3.67%. The agreement also reduced the number of its centrifuges by two-thirds. Rouhani said the enrichment limits would be surpassed after Sunday. He has also vowed to revive work on the Arak heavy-water reactor, which had been suspended under the nuclear deal.
• “We will raise the level of enrichment to the amount we want and need,” Rouhani said at a government meeting according to semi-official Tasnim News Agency.
• He urged the Americans and the Europeans to “go back to their commitments in the nuclear deal.”

• Rahul Gandhi has resigned as leader of India’s main opposition Congress party, ending weeks of speculation.
• In his resignation letter, which he tweeted on July 3, 2019, he took responsibility for the party’s defeat in the recent general election.
• He had already announced his intention to resign, but party leaders had hoped to change his mind.
• Gandhi’s father, grandmother and great grandfather were all former prime ministers.
• In the letter he added that while he had no “hatred or anger” towards India’s ruling Bharatiya Janata Party (BJP), “every living cell in my body instinctively resists their idea of India” which he said was based on differences and hatred.

• Satellite pictures confirm there is a persistent lava lake inside the crater of a remote British Overseas Territory (BOT) volcano.
• Few enduring lava lakes are known globally; the one at Mount Michael on Saunders Island in the South Atlantic may be only the eighth such example. The 990m-high strato volcano’s setting makes it extremely difficult to climb.
• Pictures taken from space are really therefore the only way of looking inside the opening at the summit.
• Orbiting sensors from as far back as the 1990s have detected heat anomalies in the crater. But it has taken the most modern satellites to resolve the crater floor, and to verify the presence of the lake.

• Pakistan Cricket Board (PCB) patron-in-chief Prime Minister Imran Khan has given nod of approval to newly-amended domestic structure, which will be implemented from this year.
• PCB patron gave approval to the new domestic format, while notification in this regard was also issued. “The PM has directed the departments as well as government departments, which have their cricket teams, to fully cooperate and help to implement new domestic system.”
• Total of 11 departments were issued directives from the PM office, which include Wapda, SNGPL, State Bank, National Bank, KRL, PTV, ZTBL, PIA, Railways and Civil Aviation Authority. Previously 16 regional cricket associations have now been merged into six and according to new set up, six teams are, Punjab Central, Punjab Southern, Sindh, KP, Balochistan and Northern Regions.

10. England whip NZ to cruise into first semi-final since 1992

• England qualified for the World Cup semi-finals for the first time in 27 years on July 3, 2019 with a crushing 119-run win over New Zealand, who are also effectively heading to the playoffs despite a third straight loss.
• Jonny Bairstow`s second century in a row helped England to 305-8 off its 50 overs at the Riverside Ground, and the Black Caps never looked like chasing down the target after the run-outs of Kane Williamson and Ross Taylor in successive overs left them 69-4. 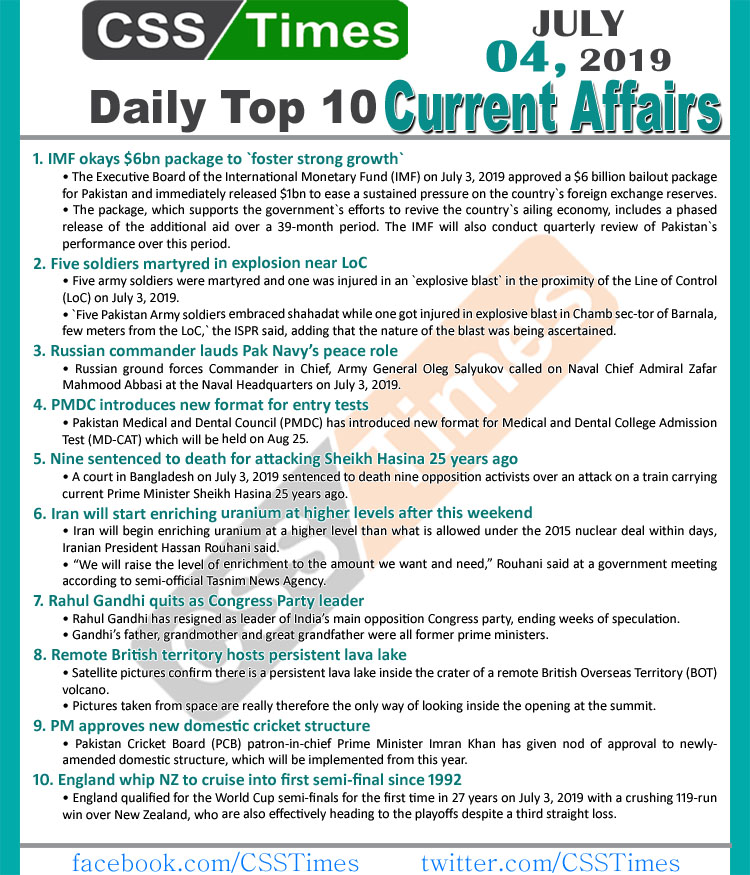