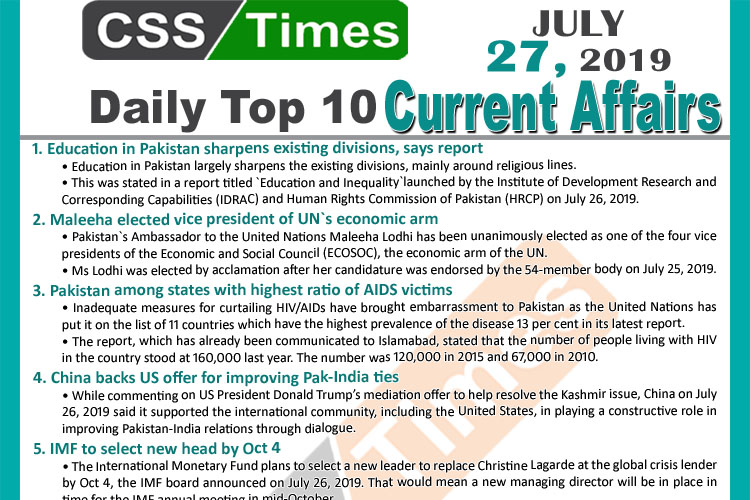 • Education in Pakistan largely sharpens the existing divisions, mainly around religious lines.
• Discriminated against in all respects, the life of non-Muslim students and teachers is miserable.
• This was stated in a report titled `Education and Inequality`launched by the Institute of Development Research and Corresponding Capabilities (IDRAC) and Human Rights Commission of Pakistan (HRCP) on July 26, 2019.
• The report, which was launched at the HRCP office, pointed out that the situation was quite alarming.
• It said that similarly 70pc of teachers admitted to having faced discrimination based on their faith. While, as many as 72pc of parents believed their children to be discriminated against in schools and colleges because of their faith-based identity.

• Pakistan`s Ambassador to the United Nations Maleeha Lodhi has been unanimously elected as one of the four vice presidents of the Economic and Social Council (ECOSOC), the economic arm of the UN.
• Ms Lodhi was elected by acclamation after her candidature was endorsed by the 54-member body on July 25, 2019.
• She will assume the Asia Pacific seat in the Bureau of Ecosoc, a principal organ of the UN mandated to deliberate on socio-economic and development agendas of the world.
• Norway`s Ambassador Mona Juul was elected Ecosoc`s president, also by acclamation. She replaced Rhonda King of Saint Vincent and the Grenadines.

3. Pakistan among states with highest ratio of AIDS victims

• Inadequate measures for curtailing HIV/AIDs have brought embarrassment to Pakistan as the United Nations has put it on the list of 11 countries which have the highest prevalence of the disease 13 per cent in its latest report.
• It is the highest ratio of HIV prevalence the country has touched during the last decade, raising concerns among global health partners.
• The UNAIDS-2019 analysis revealed that the world is on track to end the AIDS epidemic by 2030, but Pakistan is among the countries where ratio of new AIDs cases saw a sharp increase. The report termed it a blow to global efforts to curtail the disease.
• It stated that the average HIV incidence per 1000 people in Pakistan was 0.08 in 2010, which had risen to 0.11 last year.
• The situation has aggravated despite grant of `massive funding` by international health partners to curtail HIV.
• The report, which has already been communicated to Islamabad, stated that the number of people living with HIV in the country stood at 160,000 last year. The number was 120,000 in 2015 and 67,000 in 2010.

• While commenting on US President Donald Trump’s mediation offer to help resolve the Kashmir issue, China on July 26, 2019 said it supported the international community, including the United States, in playing a constructive role in improving Pakistan-India relations through dialogue.
• “We support the international community, the US included, in playing a constructive role for improving Pakistan-India relations through dialogue,” Chinese Foreign Ministry spokesperson Hua Chunying said. “We hope the two countries can peacefully settle the Kashmir issue and other bilateral disputes through dialogue, and make concerted efforts to safeguard peace and stability in South Asia,” she added.
• The spokesperson said that as a neighbour to both Pakistan and India, China sincerely hoped that Pakistan and India could live in harmony.

• The International Monetary Fund plans to select a new leader to replace Christine Lagarde at the global crisis lender by Oct 4, the IMF board announced on July 26, 2019. That would mean a new managing director will be in place in time for the IMF annual meeting in mid-October.
• Lagarde resigned her post effective Sept 12 as she awaits final word on her nomination to the presidency of the European Central Bank.
• The IMF board confirmed a commitment to `an open, merit-based, and transparent process for the selection of the next managing director,` the institution is widely expected to continue the 75-year tradition of picking a European to lead the fund, while an American has always led the IMF`s sister institution, the World Bank.
• Any of the fund`s 189 members can nominate a candidate from July 29 to Sept 6, after which the board will announce its shortlist of up to three names, the IMF said in a statement. EU leaders early this month picked Lagarde to succeed ECB chief Mario Draghi, whose single, eight-year term ends in November.

• Inspired by an Australian ambulance crew who took a dying woman to the beach on her way to hospital, officials have announced a dedicated vehicle to grant final wishes to terminally ill patients.
• In late 2017, ambulance officers in the northern state of Queensland took a detour on the way to hospital as per the wishes of a dying patient who wanted to see the ocean one last time.
• The touching gesture was captured by a photo showing a paramedic beside a stretcher facing the ocean at Hervey Bay, on Australia`s nohheast coast.
• This week the Queensland state government announced it was dedicating a decommissioned ambulance to granting dying wishes of terminally ill patients, such as visiting their pets, their children, their grandchildren or visiting an an gallery or museum.

• Iran has freed nine of 12 Indian crew from a Panama flagged tanker seized on July 14, India`s foreign ministry said on July 26, 2019.
• Iran had accused the MT Riah ship of smuggling contraband fuel when it was detained, amid mounting tensions between the Iranian government and both Britain and the US over shipping in the Strait of Hormuz.
• The MT Riah crossed into Iranian waters around July 14 and stopped transmitting signals shortly afterwards, the Tanker Trackers online oil shipment website reported at the time.
• `Nine crew members have been released and they will be on their way to India soon,` said Indian foreign ministry spokesman Raveesh Kumar.

• Iran test launched a medium-range ballistic missile inside its borders, US officials said on July 26, 2019, defying Trump administration demands that it curtail the weapon programme and demonstrating its intent to further push back against US sanctions.
• The test came amid heightened tensions between Iran and the West, mainly over the safety of commercial shipping in the Persian Gulf and the Strait of Hormuz.
• A White House spokesman called the test launch an example of Iran `acting out` as a result of intense pressure from US economic sanctions.
• The US officials who confirmed the missile launch spoke on condition of anonymity to discuss sensitive information.

• Pakistan fast bowler Mohammad Amir announced his retirement from Test cricket on July 26, 2019 to concentrate on the limited-overs game, nine years after a spot-fixing ban halted his burgeoning career.
• The 27-year-old, who is regarded as one of the best left arm pacers after countryman Wasim Akram, said he wants to move away from the traditional format.
• `It has been an honour to represent Pakistan in the pinnacle and traditional format of the game,` Amir was quoted as saying in a Pakistan Cricket Board (PCB) media release. `I, however, have decided to move away from the longer version so I can concentrate on white ball cricket.
• Amir is currently in England where he is signed to play for Essex in the English season. Amir said he had been thinking about quitting Test cricket for some time and it was not an easy decision for him.

• Chris Woakes and Stuart Broad wreaked havoc on July 26, 2019 as Ireland`s dream of pulling off one of the biggest shocks in the history of Test cricket by beating England at Lord`s was shattered as they collapsed to 38 all out to lose by 143 runs.
• On a murky morning, Ireland made a dream start when Stuart Thompson ended England`s second innings on 303 with the first ball of the day, clean bowling Olly Stone to leave themselves two days to knock off 182 runs.
• After a rain delay they began the chase in encouraging fashion, reaching 11 without loss, but the wheels fell off in spectacular fashion as they posted the lowest ever test total at Lord`s, capitulating in 15.4 overs. 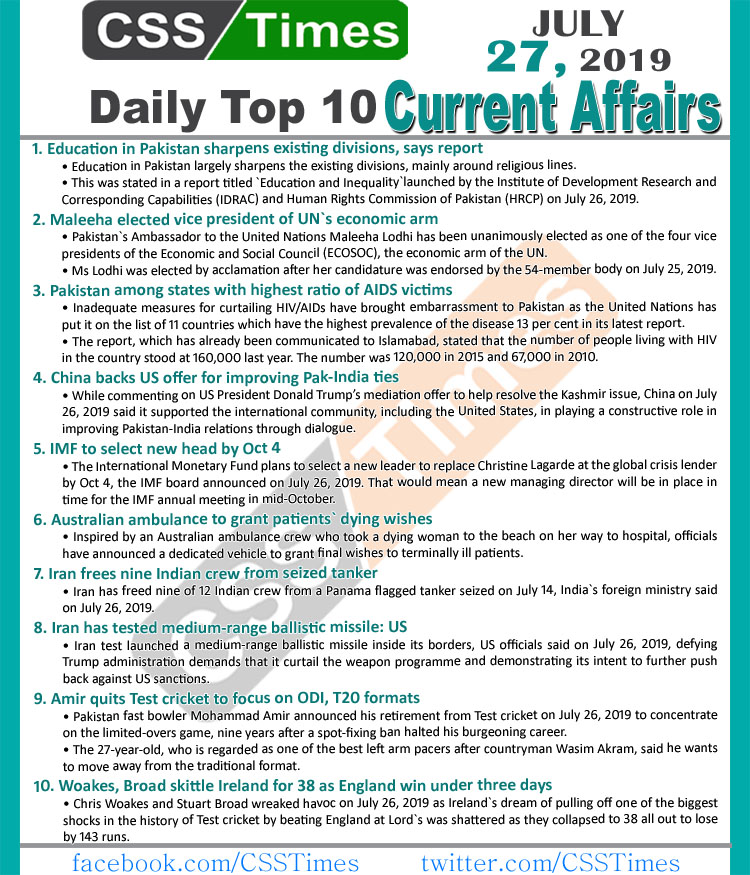