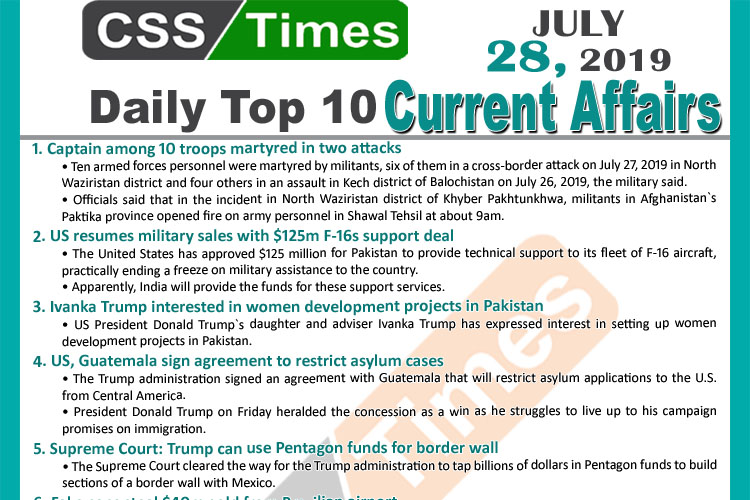 • Ten armed forces personnel were martyred by militants, six of them in a cross-border attack on July 27, 2019 in North Waziristan district and four others in an assault in Kech district of Balochistan on July 26, 2019, the military said.
• Saturday`s ambush was claimed by the banned Tehreek-i-Taliban Pakistan, also known as the Pakistani Taliban, which is separate from the insurgent movement across the border in Afghanistan. No group claimed responsibility for Friday`s attack.
• In a statement, the ISPR`s director general, Maj Gen Asif Ghafoor, said: `Shahadat (martyrdom) of six soldiers on Pak-Afghan border and four in Balochistan is the sacrifice Pakistan (is) making for peace in the region. While security of tribal areas has been improved with efforts now focused to solidify border, inimical forces are attempting to destabilise Balochistan.
• Officials said that in the incident in North Waziristan district of Khyber Pakhtunkhwa, militants in Afghanistan`s Paktika province opened fire on army personnel in Shawal Tehsil at about 9am.

• The United States has approved $125 million for Pakistan to provide technical support to its fleet of F-16 aircraft, practically ending a freeze on military assistance to the country.
• `The US State Department has made a determination approving a possible Foreign Military Sale (FMS) to Pakistan for Technical Security Team (TST) in continued support of the F-16 programme for an estimated cost of $125 million, said an official notification sent to the US Congress on Friday.
• The approval was announced days after a White House meeting between Prime Minister Imran Khan and US President Donald Trump, which sought to `reset` troubled US-Pakistan ties. Army Chief Gen Qamar Javed Bajwa accompanied the prime minister and remained in Washington after his departure as well for a series of meetings with US defence officials.
• Another official notification said the Trump administration has also approved an Indian request to provide $670m worth of support for its C-17 transport planes.
• Apparently, India will provide the funds for these support services.

• US President Donald Trump`s daughter and adviser Ivanka Trump has expressed interest in setting up women development projects in Pakistan.
• Ms Trump expressed this desire in a recent meeting with Minister of State for Overseas Pakistanis Syed Zulfiqar Abbas Bukhari in Washington.
• Her husband Jared Kushner, who assists President Trump on foreign policy issues, also attended the meeting.
• Mr Bukhari and Ms Trump agreed on increasing cooperation between Pakistan and the US on various fronts, the ministry said.
• Earlier this month, Ms Trump spearheaded an initiative to give more financial power to women in the developing world.
• Last week, the initiative announced its first batch of grants $27 million for 14 projects in 22 countries mostly in Africa, Latin America and Southeast Asia.

• The Trump administration signed an agreement with Guatemala that will restrict asylum applications to the U.S. from Central America.
• The “safe third country” agreement would require migrants, including Salvadorans and Hondurans, who cross into Guatemala on their way to the U.S. to apply for protections in Guatemala instead of at the U.S. border. It could potentially ease the crush of migrants overwhelming the U.S. immigration system, although many questions remain about how the agreement will be executed.
• President Donald Trump on Friday heralded the concession as a win as he struggles to live up to his campaign promises on immigration.

5. Supreme Court: Trump can use Pentagon funds for border wall

• The Supreme Court cleared the way for the Trump administration to tap billions of dollars in Pentagon funds to build sections of a border wall with Mexico.
• The court’s five conservative justices gave the administration the green light on July 26, 2019 to begin work on four contracts it has awarded using Defence Department money. Funding for the projects had been frozen by lower courts while a lawsuit over the money proceeded. The court’s four liberal justices wouldn’t have allowed construction to start.

• Armed police impersonators stole more than 1,600 pounds of precious metals, valued at $40 million, from Brazil’s Sao Paulo Airport, taking two hostages in the process.
• Men dressed as Brazilian federal police officers arrived at Guarulhos airport in vehicles outfitted with fraudulent law enforcement markings. The armed thieves then proceeded to order airport workers to fill a pickup truck with gold and other precious metals before departing with two hostages.
• The thieves may have kidnapped a senior airport official on Wednesday, holding him for 12 hours to gain information about the shipment of valuable metals, reported Fox News. Four children related to the official may have also been kidnapped to gain information.

• Egan Bernal was poised to become the first Colombian to win the Tour de France when he retained the overall lead after July 27, 2019`s 20th stage, a 59-km ride from Albertville.
• The Team Ineos rider, 22, finished the stage won by 2014 champion Vicenzo Nibali of Italy in fourth place.
• His team-mate and defending champion Geraint Thomas is second overall ahead of Dutchman Steven Kruijswijk after France`s Julian Alaphilippe cracl(ed in the final ascent to the ski resort of Val Thorens.

• Caeleb Dressel made history — again — at the world swimming championships. The American won three gold medals in a span of about two hours July 27, 2019 night, duplicating his feat from two years ago in Budapest, Hungary.
• Dressel has six golds and seven medals overall with one night remaining in the meet. He tied Michael Phelps’ record of seven medals — all gold — at a single worlds in 2017. “It was not easy in ’17, it was not easy this year,” the 22-year-old Floridian said. “I don’t want it to be easy, I really don’t.”

9. Int’l Paragliding Cup to be held from Sept 27

• Pakistan International Paragliding Cup 2019 and Kashmir Premier League event will be held from September 27 this year in the picturesque valley of Muzaffarabd, capital of Azad Jammu and Kashmir, to promote tourism in the area. In this connection a roadshow was held here at Pakistan High Commission London the other day. 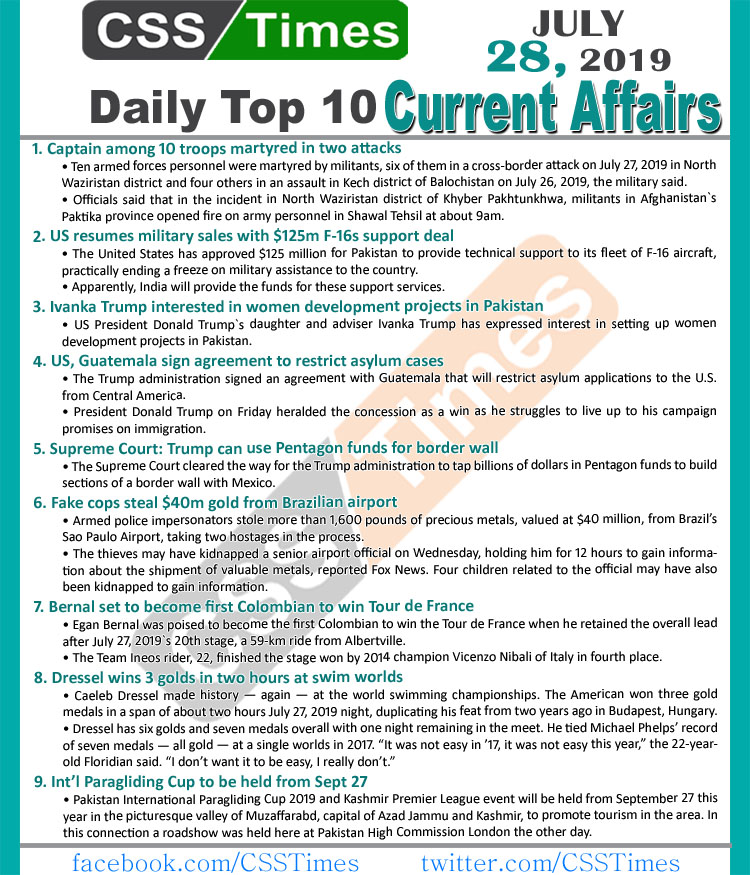