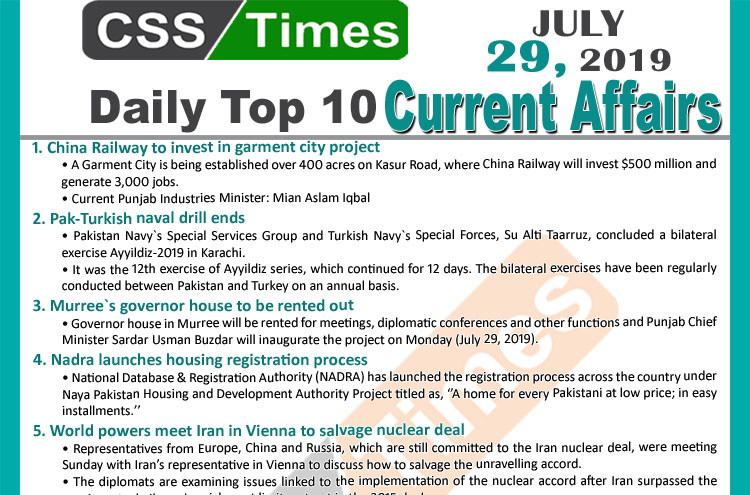 • A Garment City is being established over 400 acres on Kasur Road, where China Railway will invest $500 million and generate 3,000 jobs.
• The Chinese delegation head, Ms Karan showed keen interest in making investments in the textile sector of Punjab. She said Punjab was a very attractive place for investment in the textile sector and the Chinese companies would invest here.
• The government was focusing on promoting export-led industry and import substitution for sustained economic growth. He said China could help increase Pakistan`s exports by relocating export-oriented industries and initiating joint ventures in various fields.
• Current Punjab Industries Minister: Mian Aslam Iqbal

• Pakistan Navy`s Special Services Group and Turkish Navy`s Special Forces, Su Alti Taarruz, concluded a bilateral exercise Ayyildiz-2019 in Karachi.
• It was the 12th exercise of Ayyildiz series, which continued for 12 days. The bilateral exercises have been regularly conducted between Pakistan and Turkey on an annual basis.
• The aim of the exercise was to strengthen military relationships, improve coordination, interoperability and exchange of professional expertise in Special Operations Forces` domain.
• Personnel from both navies mutually benefited from the exercise which included anti-terrorism operations, rescue and hostage operations, counter-terrorism in maritime domain and intelligence-based operations.

3. Murree`s governor house to be rented out

• Governor house in Murree will be rented for meetings, diplomatic conferences and other functions and Punjab Chief Minister Sardar Usman Buzdar will inaugurate the project on Monday (July 29, 2019).
• The provincial government will also announce rates for renting the building at the inaugural ceremony.
• Based on the directives of Prime Minister Imran Khan to utilise state buildings for public welfare purposes, the government has decided to open official residence for citizens.
• The governor house will be available on rent for international conferences.
• The governor house, known as Government House, is situated on Kashmir Point in Murree. It is located at an altitude of 7,513 feet above the sea level.

• National Database & Registration Authority (NADRA) has launched the registration process across the country under Naya Pakistan Housing and Development Authority Project titled as, ‘’A home for every Pakistani at low price; in easy installments.’’
• Registration will be accepted for only one member of each family on the basis of First Come-First Served Basis, Radio Pakistan reported.
• The interesting people have been advised not to forget to obtain a receipt and make sure that their CNIC and tracking numbers are entered correctly.

• Representatives from Europe, China and Russia, which are still committed to the Iran nuclear deal, were meeting Sunday with Iran’s representative in Vienna to discuss how to salvage the unravelling accord.
• The diplomats are examining issues linked to the implementation of the nuclear accord after Iran surpassed the uranium stockpile and enrichment limits set out in the 2015 deal.
• Iran recently begun surpassing those limits, saying the moves can be reversed if other parties to the agreement — Germany, France, Britain, China, Russia and the European Union — come up with enough economic incentives to offset the US sanctions that President Donald Trump reinstated after pulling his country from the nuclear accord.

6. US moves to pacify Afghans as Taliban reject direct talks

• US peace envoy Zalmay Khalilzad said on July 28, 2019 that intra-Afghan talks will only start after certain agreements are reached and non-official elements will be included in the official Afghan team.
• Earlier on Sunday, a Taliban spokesman told journalists in Doha, Qatar, that the militants would not hold direct talks with the Afghan government. The rejection followed a statement from an Afghan minister that a government team might meet senior Taliban leaders within the next two weeks. Ambassador Khalilzad responded to this claim and counterclaim in a tweet released in the evening, urging both sides to be patient.
• `Lot of chatter in Kabul about intra-Afghan negotiations. To clarify, those negotiations will occur after we conclude our own agreements,` he wrote.
• `And (talks) will take place between the Taliban and an inclusive and effective national negotiating team consisting of senior government officials, key political party representatives, civil society and women,` he added.

• Carlos Cruz-Diez, one of the major figures in kinetic an, has died at the age of 95 in Paris on July 28, 2019.
• The Franco-Venezuelan artist was born August 17 in 1923, in Caracas, and as a young student at the School of Fine An there financed his studies by drawing comic books.
• From 1960, he lived and worked in Paris.
• He founded three art workshops, in Caracas, in Paris and in Panama, as well as the Cruz-Diez Art Foundation in Houston, Texas, his website noted.

• Israel`s US-backed Arrow-3 ballistic missile shield has passed a series of live interception tests over Alaska, Prime Minister Benjamin Netanyahu said on July 28, 2019, casting the achievement as a warning to Iran.
• Jointly manufactured by US firm Boeing Co, Arrow-3 is billed as capable of shooting down incoming missiles in space, an altitude that would destroy any nonconventional warheads safely. It passed its first full interception test over the Mediterranean Sea in 2015 and was deployed in Israel in 2017.
• Israel views the Arrow-3 as a bulwark against the ballistic missiles fielded by Iran and Syria.
• Iran has been locked in a spiralling confrontation with the United States over its nuclear programme and missile projects.

• A new set of books, considered the most complete versions of the Tibetan epic King Gesar, was released July 28, 2019 at a book expo in Xi’an, northwest China’s Shaanxi Province.
• King Gesar is generally considered the world’s longest folk epic.
• The collection, with over 130 million characters and 300 volumes in hardback covers, almost includes all the versions of the epic that are available, according to its investor Sichuan Publishing Group. 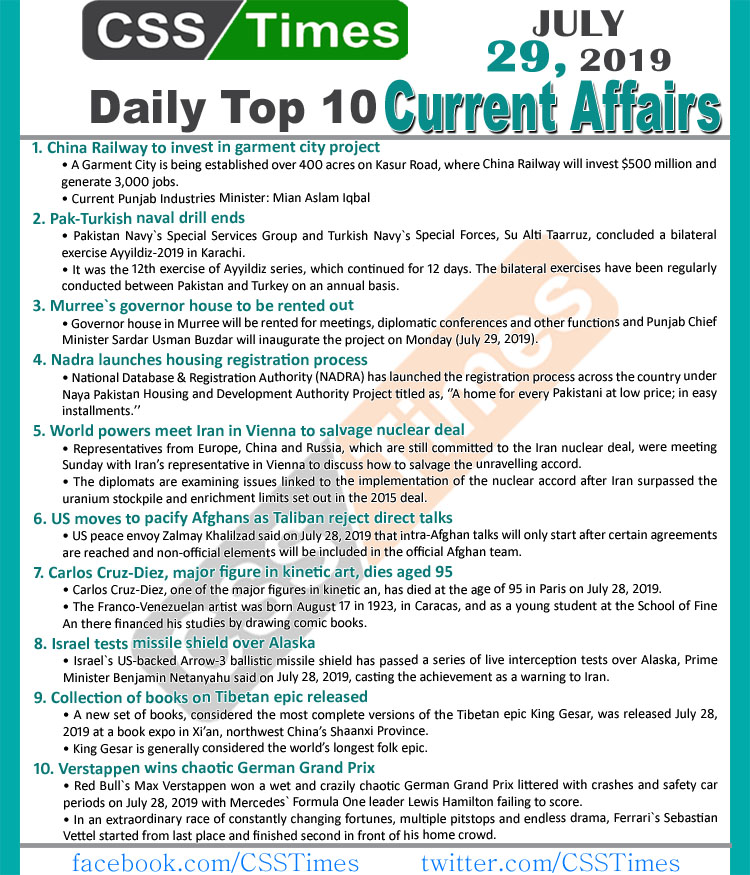