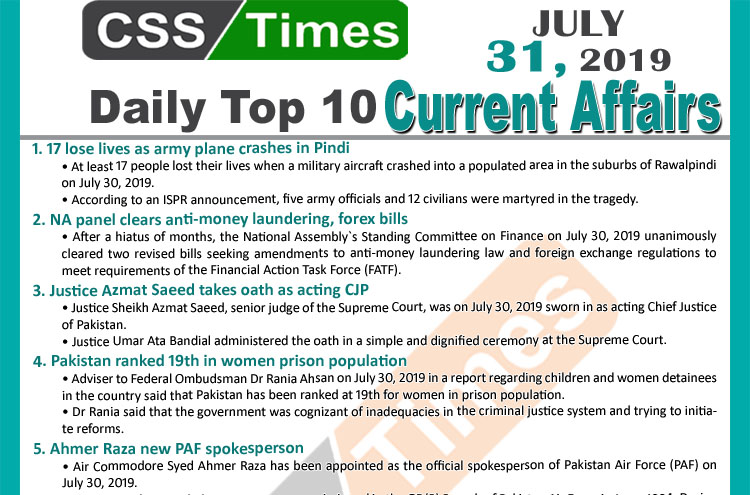 • At least 17 people lost their lives when a military aircraft crashed into a populated area in the suburbs of Rawalpindi on July 30, 2019.
• According to an ISPR announcement, five army officials and 12 civilians were martyred in the tragedy.
• Another 12 civilians were injured in the crash as the aircraft slammed into houses below where most of the people were sleeping at the time.
• However, according to emergency services Rescue 1122, 18 people lost their lives in the crash and nine civilians were injured.
• The incident happened at around 2am in Mora Kalu, an impoverished village in Rawalpindi adjacent to the upscale Bahria Town housing society. The Beechcraft King Air 350 turboprop aircraft belonging to Army Aviation was on a routine training flight, according to the ISPR.

• After a hiatus of months, the National Assembly`s Standing Committee on Finance on July 30, 2019 unanimously cleared two revised bills seeking amendments to anti-money laundering law and foreign exchange regulations to meet requirements of the Financial Action Task Force (FATF).
• In doing so, the committee led by former finance minister Asad Umar secured safeguards to the proposed amendments by requiring investigation officers to have court warrantsbefore arresting persons suspected of committing crimes.
• The two bills are aimed at strengthening the existing laws on money laundering and foreign exchange control to make them more stringent to fight money laundering, hundi and hawala and effectively regulate foreign exchange transactions to meet standards of the Paris-based global watchdog on financial crimes.
• Pakistan has been on FATF`s grey list since June last year and was given about 15 months until October to comply with global standards on financial business and transactions to avoid being put on the blacklist having serious economic implications. The International Monetary Fund (IMF) has also asked Pakistan to comply with the FATF requirements, otherwise its foreign inflows could be badly affected.

• Adviser to Federal Ombudsman Dr Rania Ahsan on July 30, 2019 in a report regarding children and women detainees in the country said that Pakistan has been ranked at 19th for women in prison population.
• Dr Rania said that the government was cognizant of inadequacies in the criminal justice system and trying to initiate reforms.
• The report revealed that a total of population in prisons was mainly 84,325 out of which 1650 were female as per statistics in 2017 this also included 1527 adult women prisoners.
• In 2018, the number of female detainees was 1955, however, the number of detainees and their percentage in the total prison population remained low.
• In 1999, the number of women in prisons was 1,203 and 1,518 women lead their lives in jails.

• Air Commodore Syed Ahmer Raza has been appointed as the official spokesperson of Pakistan Air Force (PAF) on July 30, 2019.
• Air Commodore Syed Ahmer Raza was commissioned in the GD(P) Branch of Pakistan Air Force in June, 1994. During his career, he has commanded a Flying Squadron and a Support Wing.
• In his staff appointments, he has served as Staff Operations Officer at an Operational Base and Member Operations at Establishment Review Board, Air Headquarters Islamabad.
• Ahmer Raza is a qualified flying instructor and has served as Instructor Pilot at Primary Flying Training Wing, PAF Academy Asghar Khan. He is a graduate of PAF Air War College and Malaysian Armed Forces Staff College. In recognition of his outstanding service and thorough professionalism, he has been awarded Tamgha-i-Imtiaz (Military).

• Indian lawmakers on July 30, 2019 approved a bill to end the Muslim practice of instant divorce two years after the Supreme Court ruled that it violated the constitutional rights of Muslim women.
• Law Minister Ravi Shankar Prasad said the bill`s approval by the upper house of Parliament reflects the empowerment of women and India`s changing profile.
• The more powerful lower house approved the bill last week. It will become law after India`s president approves it, which is a formality.
• Most of the 170 million Muslims in India are Sunnis governed by the Muslim Personal Law for family matters. The law has included allowing Muslim men to divorce their wives by saying `Talaq`, the Arabic word for divorce, three times and not necessarily consecutively, but at any time, and by any medium, including telephone, text message or social media post.
• More than 20 countries, including Pakistan and Bangladesh, have banned the practice.

7. President Trump threatens to get ‘Much Tougher’ on China

• President Donald Trump is threatening to get “much tougher” with China on trade if he wins reelection in 2020.
• Trump is tweeting his frustration as negotiations between the countries resume Tuesday two months after talks aimed at ending a tariff war broke down.
• Trump complains China’s leaders “always change the deal in the end to their benefit” and suggests they should wait out the election to see if a Democrat wins.

• At least 3,812 Afghan civilians were killed or wounded in the first half of 2019 in the war against militant groups, including a big increase in the number of casualties caused by government and foreign forces, the United Nations said on July 30, 2019.
• The latest casualty figures were released as talks between the Taliban and US officials to end the 18-year Afghan war entered an important stage, with US negotiators aiming to reach a peace deal before Sept 1.
• However, the war has raged on despite the diplomatic efforts, forcing civilians to live under the constant threat of being targeted by militants or being caught up in ground fighting, or becoming inadvertent victims of air strikes by Afghan government and foreign forces.
• The UN Assistance Mission in Afghanistan (UNAMA) said in its latest report ground raids and clashes caused the most civilian casualties, followed by bomb attacks and air strikes.

• Dubai`s financial regulator said on July 30, 2019 it had imposed a record fine of nearly $315 million on two affiliates of the collapsed Abraaj equity group for unauthorised activities and misusing investors` funds.
• The Dubai Financial Services Authority (DFSA) said in a statement that it fined Abraaj Investment Management $299.3m and Abraaj Capital Limited $15.3m.
• The two companies are affiliates of the Abraaj Group that once was the leading private equity firm in the Middle East with nearly $14 billion of assets under management. 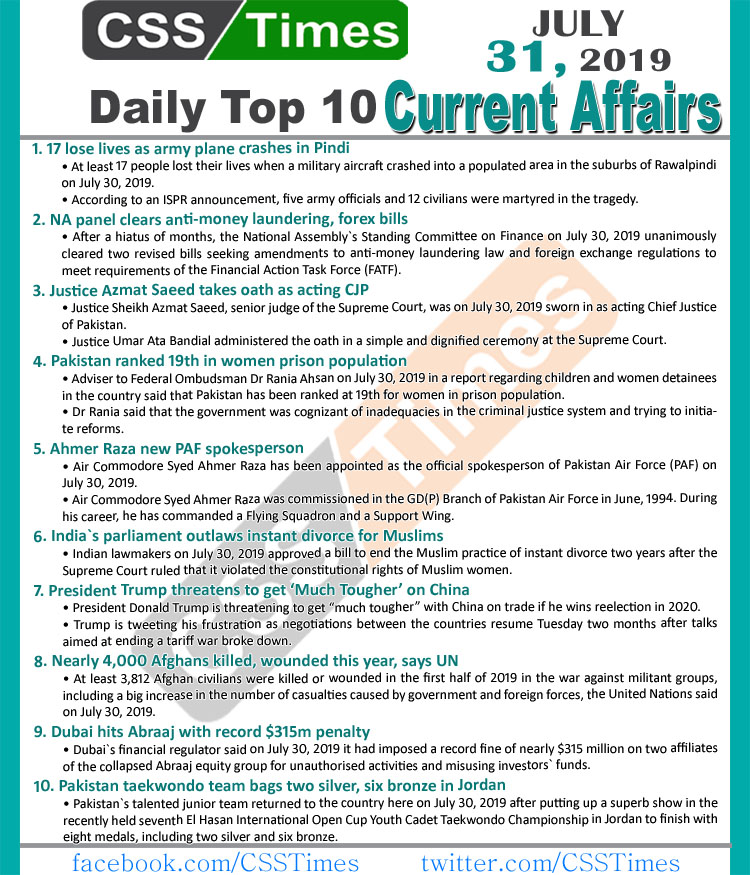