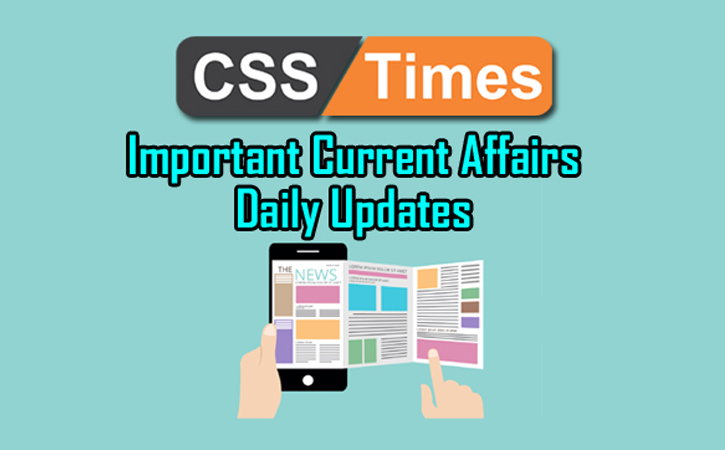 • Opening ceremony of the 10th edition of the International Defence Exhibition and Seminar (IDEAS) 2018 organised by the Defence Export Promotion Organisation at the Karachi Expo Centre held on November 27, 2018.
• Following a grand inauguration ceremony, the president, who was also the chief guest on the occasion, said that IDEAS served as a regional gateway for international manufacturers and suppliers to explore new avenues of defence cooperation through joint ventures, outsourcing and collaboration.
• The biennial exhibition will continue till Nov 30.

2. Pakistan among countries with least spending in social sectors: UN

• The United Nations has placed Pakistan in the group of Asia-Pacific countries that spend the least on social protection, education and healthcare.
• According to the `Social Outlook for Asia and the Pacific 2018` report published by the UN Economic and Social Commission for Asia and the Pacific (UN-ESCAP) on November 27, 2018, other countries in the group are Bangladesh, Indonesia, Laos, Nepal and Timor-Leste.
• With the exception of Timor-Leste, it said, all other countries in the group spent around five per cent of their GDP on the three social sectors, which was below the regional average of nine per cent of GDP.
• Most of these countries were also all low-income states, many of which had seen human and other resources depleted by conflicts and natural disasters. The main challenge for this country grouping, it noted, was to gather political will and public support for significantly boosting investments in people.
• The report said that while the Asia Pacific region had made considerable achievements in primary education with primary school net enrolment rates above 90pc in almost every country gross enrolment rates for secondary education varied widely, being as low as 45pc in Cambodia and Pakistan.

• A Reform Action Plan framed by the Balochistan`s finance department for increase in taxes on taxable and non-taxable entities was approved by Chief Minister Jam Kamal Khan Alyani at a meeting held on November 27, 2018.
• The meeting decided that a resource mobilisation conference would be convened soon and in the upcoming financial year all tax-collecting departments would be given certain targets for tax collection.
• The meeting also decided to give awards to those provincial government departments which will meet their tax-collection targets. For the implementation of the Reform Action Plan, the finance department has given guidelines to all respective departments.
• These departments can make polices and give suggestions in accordance with already provided guidelines.

4. Pak Suzuki to set up second plant at Port Qasim

• Prime Minister Imran Khan has welcomed Pak Suzuki Motor Company`s plan for to setting up its second assembly plant at Port Qasim, Karachi.
• While talking to a delegation, led by Suzulci`s Global Chairman Osamu Suzuki on November 27, 2018, the premier said the government is committed towards supporting the development of private sector, promoting investment, improving ease of doing business and growth of manufacturing sector.
• The delegation apprised the PM that the construction of second plant will increase company`s manufacturing capacity by additional 100,000 vehicles per year.
• The delegation included Kinji Saito, Masafumi Harano, Shigeo Takezawa, Yusuke Katto and Shafiq A Shaikh. The members briefed the Prime Minister on the existing investment of Suzuki Motors and the company`s future investment plans.

5. UN reaffirms refugees` right to seek asylum in US

• Asylum seekers at the Mexican border fleeing violence or persecution are entitled to lodge claims in the United States to obtain sanctuary there, UN agencies said in a fresh attempt to shield migrants from tough US immigration policies.
• United Nations officials have repeatedly urged Washington to ensure asylum seekers are protected, but US President Donald Trump said on November 27, 2018 Mexico should send migrants seeking asylum in the United States back to their home countries.
• US authorities fired tear gas canisters towards migrants in Mexico near the border crossing separating Tijuana from San Diego, California on November 26, 2018 when some rushed through border fencing into the United States. Mexico`s foreign ministry presented a diplomatic note to the US government on November 27, 2018 calling for a `full investigation`.

• Slovenia`s government on November 247, 2018 appointed a female officer as the head of the army, a first for the small country which is a member of NATO and the European Union.
• Maj. Gen. Alenl(a Ermenc, 55, will formally take up her post as the Chief of the General Staff of the Slovenian Armed Forces at a ceremony, when she will also become the only woman to currently hold the top army post among the NATO countries.
• The British-educated Ermenc replaces Maj. Gen. Alan Geder after serving as his deputy. Geder took over Slovenia`s military earlier this year after his predecessor was sacked over poor results in a Nato test.
• Slovenian President Borut Pahor hopes Ermenc`s appointment will help improve the performance of Slovenia`s military.

7. World must triple its efforts to cap global warming: UN

• Humanity is falling further behind in the race against climate change, with the gap between greenhouse gas emissions and levels needed to achieve the Paris climate treaty temperature goals continuing to widen, the UN said on November 27, 2018.
• With only a single degree Celsius of warming so far, the world has seen a crescendo of deadly wildfires, heat waves and hurricanes.
• On current trends, temperatures are on track to rise roughly 4°C by the century`s end, a scenario that would tear at the fabric of civilisation, scientists say.
• To cap global warming at two degrees Celsius, national carbon-cutting pledges annexed to the 2015 Paris Agreement must collectively triple by 2030, according to the UN Environment Programme`s (UNEP) Emissions Gap report.
• To hold the rise in Earth`s temperature to 1.5°C above the pre-industrial benchmark, such efforts would have to increase fivefold.

• Russian President Vladimir Putin on November 27, 2018 warned Ukraine against any `reckless acts` after Kiev declared martial law in response to Moscow`s seizure of three of its navy vessels.
• The Ukrainian parliament late on November 27, 2018 voted in favour of President Petro Poroshenko`s request for the introduction of martial law inborderareasfor30 days.
• The move came after Russian forces fired on, boarded and captured three of Kiev`s ships on Sunday off the coast of Crimea, sparking the most dangerous crisis between the ex-Soviet neighbours in years.
• The incident was the first major confrontation at sea in the long-running conflict pitting Ukraine against Moscow and Russian-backed separatists in the country`s east.
• It has raised fears of a wider escalation in a conflict that has killed more than 10,000 people since 2014 and prompted international calls for restraint.

• Leg-spinner Yasir Shah followed his extraordinary first innings performance with a six wicket haul as Pakistan beat New Zealand by an innings and 16 runs in the second Test in Dubai on November 27, 2018 to level the series 1-1.
• The 32-year-old, who took 8-41 in New Zealand`s first innings on Monday, had figures of 6-143 in the second for a grand match haul of 14-184.
• New Zealand following on after being dismissed for 90 in the first innings-were bowled out for 312 soon after tea on the fourth day at the Dubai International Cricket Stadium.

10. Players from 14 nations to vie for honours as Pakistan Open begins today

• Karachi, the city of lights, is ready to host the prestigious Pakistan Open Squash Championship for both men and women as some of the top players of the world compete in the battle of nerves which begins at the DA Creek Club courts on November 28, 2018.
• The event which is being held in the metropolis after a lapse of 13-years provides an opportunity to the followers of the game and youth to watch exciting matches among eminent players who are bracketed among top 50.
• The city has a rich history of staging frequent high-profile events in the yesteryears when Pakistan used to dominate the top 10 rankings in the world.
• The heavily-guarded venue is bustling with festivity since last one week, having already played host to the DHA Cup International Squash Championship, both for men and women, that served as a curtain-raiser for the Pakistan Open.
• As many as 37 foreign and 11 Pakistani players belonging to 14 nations besides the hosts will compete in men and women events.