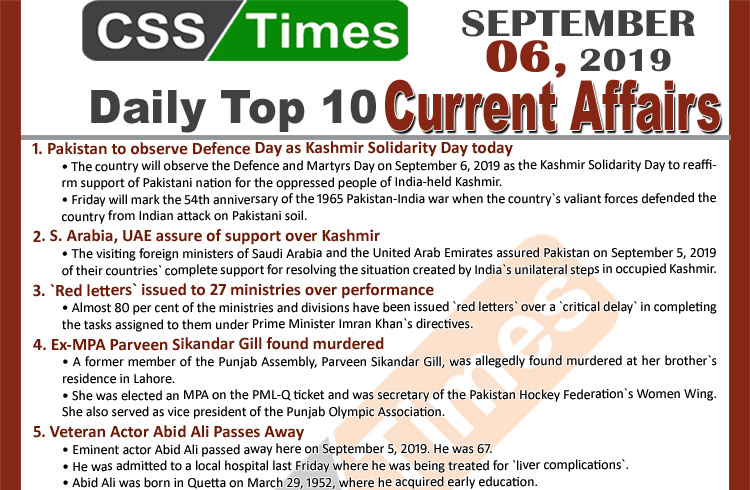 • The country will observe the Defence and Martyrs Day on September 6, 2019 as the Kashmir Solidarity Day to reaffirm support of Pakistani nation for the oppressed people of India-held Kashmir.
• Since Aug 5, residents of the occupied valley have been living under strict curfew and other crippling restrictions. This was even a day before the Indian government abrogated Articles 370 and 35A, revoking the special status of India`s only Muslim-majority state.
• By stripping held Kashmir of its special status, New Delhi blocked its right to frame its own laws and allowed non-residents to buy property in the valley. More than 4,000 people have been detained since Aug 5.
• Friday will mark the 54th anniversary of the 1965 Pakistan-India war when the country`s valiant forces defended the country from Indian attack on Pakistani soil.

• The visiting foreign ministers of Saudi Arabia and the United Arab Emirates assured Pakistan on September 5, 2019 of their countries` complete support for resolving the situation created by India`s unilateral steps in occupied Kashmir.
• The assurance was given by Saudi Minister of State for Foreign Affairs Adel Ahmed Al Jubeir and UAE Foreign Minister Sheikh Abdullah Bin Zayed Al Nahyan during their meeting with Chief of the Army Staff General Qamar Javed Bajwa in Rawalpindi.
• According to the military`s media wing, matters of mutual interest, including growing bilateral ties and the security situation in the region, were discussed. The foreign ministers appreciated Pakistan`s role for peace and stability in the region.

• Almost 80 per cent of the ministries and divisions have been issued `red letters` over a `critical delay` in completing the tasks assigned to them under Prime Minister Imran Khan`s directives.
• The red letter considered to be a final warning and expression of dis-pleasure was issued to the secretaries of 27 federal ministries/divisions out of a total of 34 ministries at the end of July, seeking completion of the assigned tasks and submission of compliance report to the prime minister by Sept 9.
• The letter made it clear that no further extension would be given in the timelines set to complete the tasks.
• According to the letter issued to one ministry/division, it was earlier given 30 days to complete certain tasks, including provision of a list of positions lying vacant at all levels for framing or updating recruitment rules, another list of vacant positions that can be re-designated, rationalised or abolished and yet an other list of officers/officials (all type of ex-cadres) eligible for promotion but not being promoted due to various reasons.

• A former member of the Punjab Assembly, Parveen Sikandar Gill, was allegedly found murdered at her brother`s residence in Lahore.
• According to the police, the 64-year-old unmarried ex-lawmaker was allegedly strangled to death with a rope and her arms and legs were tied up when she was founddead in the upper portion of her brother`s house.
• She was elected an MPA on the PML-Q ticket and was secretary of the Pakistan Hockey Federation`s Women Wing. She also served as vice president of the Punjab Olympic Association.
• Operations SSP Ismail Kharrak said a team comprising police and the forensic experts was dispatched to the house when relatives of the deceased woman called police.

• Eminent actor Abid Ali passed away here on September 5, 2019. He was 67.
• He was admitted to a local hospital last Friday where he was being treated for `liver complications`.
• Abid Ali was born in Quetta on March 29, 1952, where he acquired early education.
• Inclined towards performing arts and having an imposing voice, he joined Radio Pakistan Quetta for a brief period. From the Balochistan capital he shifted to Lahore to try his luck on television.
• In Lahore, he got an opportunity to work in the popular drama Jhok Siyal (1973) which earned him recognition. But it was his supremely nuanced performance in the iconic serial Waris (1978) that established him as a formidable actor. The rest, as they say, was history.
• Abid Ali also acted in films and did some memorable roles. Two of the films were Insaniat Ke Dushman (1987) and Khaak Aur Khoon (1979); the latter was based on a Nasim Hijazi novel.

• The Khyber Pakhtunkhwa government has turned down the Peshawar High Court`s proposal for the establishment of child protection courts at district level in the province.
• `Pakistan is signatory to the UN Child Rights Convention under which several steps have to be taken for the wellbeing of children. For that reason, we (high court) twice requested the provincial government to set up separate child protection courts at district level but the request was rejected.
• After the successful functioning of the child protection court in Peshawar, the high court was set to establish two such courts in Mardan and Abbottabad, which would begin function this month.
• He said the high court had formally responded to the objections raised by the finance department about the proposed Khyber Pakhtunkhwa Judicial Services Act.

• The Indian chapter of Amnesty International has launched a campaign aimed at lifting of the communications blackout being endured by residents of occupied Kashmir, which on September 5, 2019 marked one month since imposition of the draconian measures.
• A statement posted on the website of Amnesty International India (AII) described the communications black-out in the disputed region as an outrageous and protracted assault on civil liberties of Kashmiris and said its global campaign was an attempt to highlight the human cost of the draconian measures introduced by the Narendra Modi government.
• `The blackout has now been a month old and cannot be prolonged any further by the Indian government as it has grossly impacted the daily lives of Kashmiri people, their emotional and mental wellbeing, medical care, as well as their access to basic necessities and emergency services,` said the statement.

• The 347 scientists who collaborated to produce the world`s first image of a black hole were honoured on September 5, 2019 with the Breakthrough Prize in Fundamental Physics, winning $3 million for what is known as the `Oscars of science`.
• The Event Horizon Telescope Collaboration grabbed global headlines on April 10 when they published the first image of a super massive black hole circled by a flame-orange halo of white hot plasma.
• Directed by Shep Doelman at the Harvard Smithsonian Center for Astrophysics, the team spent over a decade simulating an Earth-sized computational telescope that combined the signals received by eight radio telescopes working in pairs around the world with their sights trained on the Messier 87 (M87) galaxy, 55 million light years away.

• South Africa has closed its diplomatic missions in Nigeria, underscoring the growing strain between Africa`s two largest economies after the latest wave of xenophobic violence in South Africa, the Department of International Relations and Cooperation said on September 4, 2019.
• The department said that while there had been `no direct physical threat` to any diplomats or staff, the situation remained `somewhat unpredictable` and there were sufficient safety concerns to close the offices in Lagos and Abuja on Tuesday.

• Batsman Rahmat Shah on September 4, 2019 became the first Afghanistan cricketer to score a Test century, helping the minnows start strongly against Bangladesh on the opening day of the one-off match.
• Rahmat made 102 and put on a crucial 120-run fourth-wicket stand with former captain Asghar Afghan, batting on 88, to counter the Bangladesh spin attack at the Zahur Ahmed Chowdhury Stadium in Chittagong. 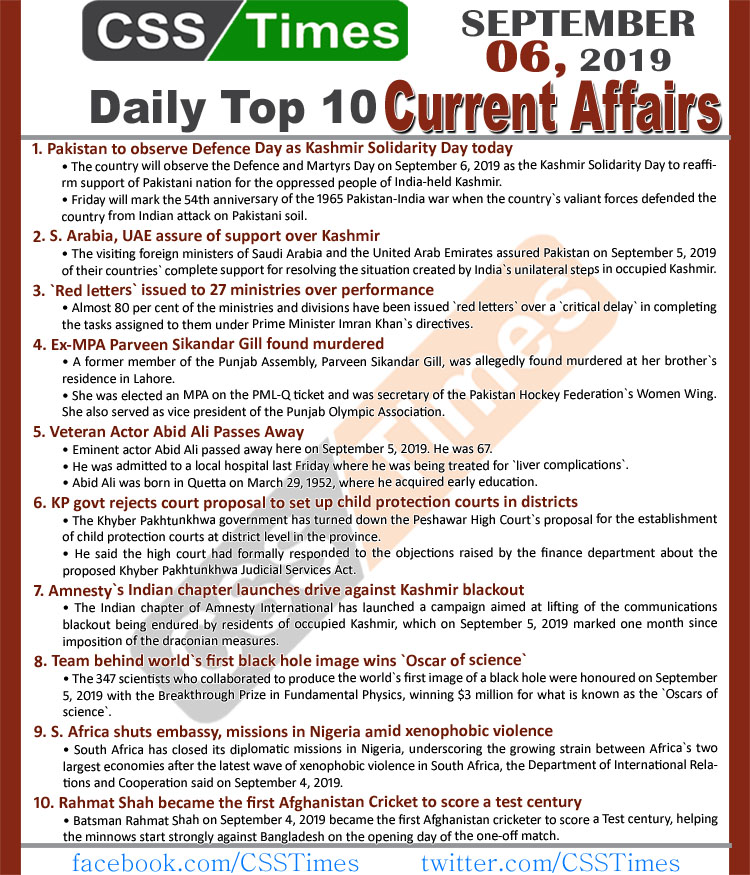