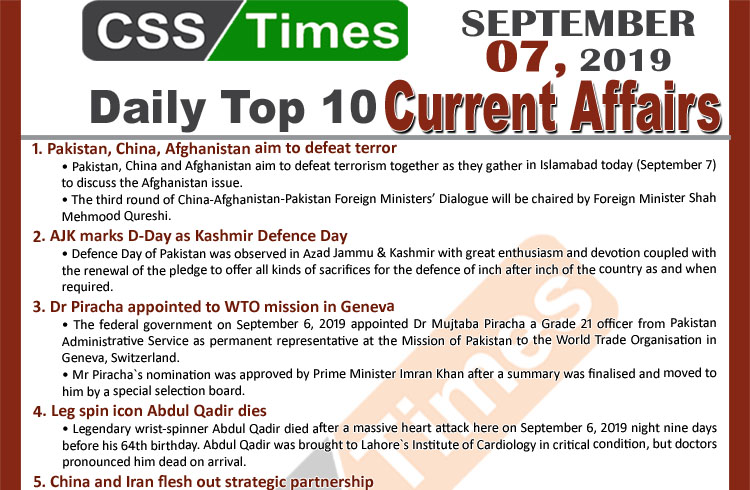 • Pakistan, China and Afghanistan aim to defeat terrorism together as they gather in Islamabad today (September 7) to discuss the Afghanistan issue.
• The third round of China-Afghanistan-Pakistan Foreign Ministers’ Dialogue will be chaired by Foreign Minister Shah Mehmood Qureshi.
• The meeting aims to advance the ongoing peace talks in Afghanistan which are aimed at catalysing an end to the 17-year invasion of the country by US troops.
• US is not in favour of going into the dialogue process led by China but Pakistan differs with the idea. Pakistan has already told the US that China’s role on Afghan peace would not undermine the US. Islamabad has also been trying to convince Washington that Beijing was naturally a stakeholder in the regional peace.

• Defence Day of Pakistan was observed in Azad Jammu & Kashmir with great enthusiasm and devotion coupled with the renewal of the pledge to offer all kinds of sacrifices for the defence of inch after inch of the country as and when required.
• In line with the decision of the government of Pakistan, the defence day of the country was marked as the defence day of Kashmir as symbol of solidarity with the people of locked down occupied valley Kashmir – suffering badly since last 33 days by the Indian occupational forces since the sinister act of New Delhi to revoke special status of the internationally-acknowledged disputed Jammu & Kashmir State.

• The federal government on September 6, 2019 appointed Dr Mujtaba Piracha a Grade 21 officer from Pakistan Administrative Service as permanent representative at the Mission of Pakistan to the World Trade Organisation in Geneva, Switzerland.
• Mr Piracha`s nomination was approved by Prime Minister Imran Khan after a summary was finalised and moved to him by a special selection board.
• `The prime minister has seen and is pleased to approve the nomination of Dr Muhammad Mujtaba Piracha (PAS/BS-21), merit No 1 of the panel finalised by the special selection board t para 4 of the summary, as Pakistan`s ambassador / permanent representative, permanent mission of Pakistan to the WTO, Geneva, reads a notification issued by Muhammad Azam Khan, secretary to the premier, on Friday night.

• Legendary wrist-spinner Abdul Qadir died after a massive heart attack here on September 6, 2019 night nine days before his 64th birthday. Abdul Qadir was brought to Lahore`s Institute of Cardiology in critical condition, but doctors pronounced him dead on arrival.
• He was last seen in public on Aug 28 at a function hosted by the Pakistan Cricket Board in honour of umpire Aleem Dar for equaling Steve Bucknor`s record for having officiated in the highest number of matches.
• He was looking quite fit and fresh and delivered a long speech in praise of Aleem Dar.
• Abdul Qadir brought the art of right-arm leg spin back to life after it had gone out of fashion during the early eighties. He kept the torch alight for a generation of leg spinners to come, among them a man no less than Australia`s Shane Warne, who himself went on to become a leg-spin wizard.

• Iran’s foreign minister Mohammad Zarif paid a visit to his Chinese counterpart Wang Li at the end of August to present a road map for the China-Iran comprehensive strategic partnership, signed in 2016.
• The updated agreement echoes many of the points contained in previous China-Iran accords, and already in the public domain. However, many of the key specifics of this new understanding will not be released to the public, despite representing a potentially material shift to the global balance of the oil and gas sector, according to a senior source closely connected to Iran’s petroleum ministry who spoke exclusively to Petroleum Economist in late August.
• The central pillar of the new deal is that China will invest $280bn developing Iran’s oil, gas and petrochemicals sectors. This amount may be front-loaded into the first five-year period of the deal but the understanding is that further amounts will be available in every subsequent five-year period, subject to both parties’ agreement.
• There will be another $120bn investment in upgrading Iran’s transport and manufacturing infrastructure, which again can be front-loaded into the first five-year period and added to in each subsequent period should both parties agree.

• The new US consul general of Lahore, Catherine Rodriguez, has assumed charge of her office.
• A career member of the US Foreign Service, Ms Rodriguez most recently served as the chief of staff for the director general of the US Foreign Service and director of human resources.
• She began her foreign services career with the United States Agency for International Development in Washington DC, with additional tours in Costa Rica and El Salvador before joining the Department of State. Her previous assignments include Karachi and Peshawar.
• She served as a regional director for the Office of Foreign Missions in Miami supporting over 3,000 foreign diplomats stationed across southeastern US. She has also serve d as a Diplomat in Residence responsible for recruiting and mentoring future members of the American diplomatic corps.

• Britain`s upper house on September 6, 2019 gave final approval to a law that would force Boris Johnson to delay Brexit, in a fresh setback for the British Prime Minister who is struggling in his bid to call an early election.
• The draft, which now requires formal assent by Queen Elizabeth II to become law, would seek to postpone Brexit beyond the current deadline of Oct 31 if Johnson does not manage to strike a divorce agreement with the EU next month.
• Johnson, who has said he would rather be `dead in a ditch` than ask for a delay, wants an early general election that could give him a mandate to take Britain out of the European Union with or without a divorce deal.

• Japanese scientists have identified a new species of dinosaur from a nearly complete skeleton that was the largest ever discovered in the country, measuring eight metres (26 feet) long.
• After analysing hundreds of bones dating back 72 million years, the team led by Hokkaido University concluded the skeleton once belonged to a new species of hadrosaurid dinosaur, a herbivorous beast that roamed the Earth in the late Cretaceous period.
• A partial tail was first found in northern Japan in 2013 and later excavations revealed the entire skeleton.
• The team named the dinosaur `Kamuysaurus japonicus,` which means `Japanese dragon god,` according to a statement issued by the university.

9. China can help defuse tensions in South Asia: US

• A senior US official said on September 6, 2019 that China can certainly play a constructive role in defusing tensions between India and Pakistan that have been triggered by New Delhi`s recent decision to annex Kashmir.
• Assistant Secretary of Defence Randall Schriver also said ties between the US and Pakistani armed forces were `one of the strongest pillars of our relationship` `We will see if the Chinese will be constructive in this area. They certainly can choose to be, given their interest there,` said the US official when asked if China could play a role in preventing yet another war in the Subcontinent.
• Mr Schriver, who looks after the Asia-Pacific region for the Pentagon, however, noted that the United States and China were competing for influence in that area. The US has included India in an alliance aimed at controlling China`s growing influence in the Asia-Pacific region, which explains Washington`s growing closeness with New Delhi.

• Robert Mugabe, the hero-turned-despot who ruled Zimbabwe for 37 years until the military forced him out, has died aged 95, the country`s president announced on September 6, 2019.
• First heralded as a liberator who rid the former British colony Rhodesia of white minority rule, Mugabe used repression and fear to govern until he was finally ousted by his previously loyal generals in November 2017.
• The country`s former colonial ruler Britain expressed its condolences but said there were `mixed emotions` after Mugabe`s death.
• `Zimbabweans suffered for too long as a result of Mugabe`s autocratic role,` the foreign ministry said in a statement.
• Mugabe died in Singapore, where he had been hospitalised in April, a Zimbabwean diplomat in South Africa said. 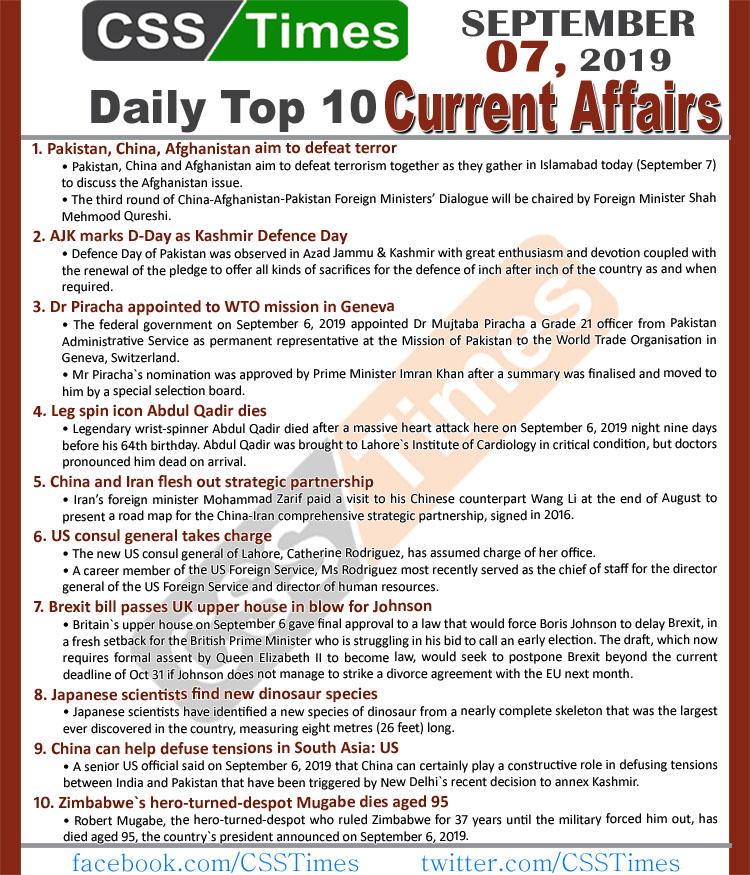