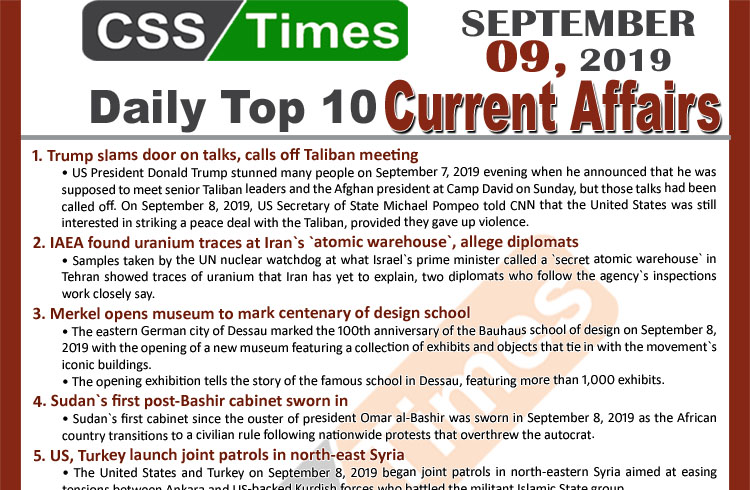 • US President Donald Trump stunned many people on September 7, 2019 evening when he announced that he was supposed to meet senior Taliban leaders and the Afghan president at Camp David on Sunday, but those talks had been called off.
• On September 8, 2019, US Secretary of State Michael Pompeo told CNN that the United States was still interested in striking a peace deal with the Taliban, provided they gave up violence.
• Camp David is a country retreat of the US president and it was there in 1978 that President Jimmy Carter brokered the Camp David Accords between Egyptian President Anwar Sadat and Israeli Prime Minister Menachem Begin. Apparently, President Trump chose this site for his talks with the Taliban because he expected this meeting to be historically as important as the Sadat-Begin meeting.As he often does, President Trump used his Twitter account to drop the bombshell on the unsuspecting public. `Unbeknownst to almost everyone, the major Taliban leaders and, separately, the president of Afghanistan, were going to secretly meet with me at Camp David on Sunday,` he wrote in the tweet. `They were coming to the United States tonight (Saturday).

• Samples taken by the UN nuclear watchdog at what Israel`s prime minister called a `secret atomic warehouse` in Tehran showed traces of uranium that Iran has yet to explain, two diplomats who follow the agency`s inspections work closely say.
• The International Atomic Energy Agency (IAEA) is investigating the particles` origin and has asked Iran to explain the traces. But Tehran has not done so, according to the diplomats, stoking tensions between Washington and Tehran. US sanctions have slashed Iranian oilsales and Iran has responded by breaching its 2015 nuclear deal with world powers.
• In a speech a year ago Israeli Prime Minister Benjamin Netanyahu, who vehemently opposed the deal, called on the IAEA to visit the site immediately, saying it had housed 15 kg (33 lb) of unspecified radioactive material that had since been removed.
• It was first reported in April that the IAEA, which is policing the nuclear deal, had inspected the site a step it had said it takes `only when necessary` and environmental samples taken there were sent off for analysis. Israeli and US media have since reported that the samples turned up traces of radioactive material or matter the same vague language used by Netanyahu.

• The eastern German city of Dessau marked the 100th anniversary of the Bauhaus school of design on September 8, 2019 with the opening of a new museum featuring a collection of exhibits and objects that tie in with the movement`s iconic buildings.
• Chancellor Angela Merkel told a crowd at the opening of the Bauhaus Museum Dessau the school featured an avant-garde style that `we still really enjoy today.` The city was the school`s second home after it moved from Weimar, and the new museum building was designed by Barcelona`s addenda architects to interface with the city and nature.
• Described as a `soaring concrete block enveloped in glass` in the heart of Dessau, `depending on the light, the surroundings are reflected more or less strongly in the glass facade or enable views through the building,` the museum said.
• The opening exhibition tells the story of the famous school in Dessau, featuring more than 1,000 exhibits.

• Sudan`s first cabinet since the ouster of president Omar al-Bashir was sworn in September 8, 2019 as the African country transitions to a civilian rule following nationwide protests that overthrew the autocrat.
• The 18-member cabinet led by Prime Minister Abdalla Hamdok, which includes four women, took oath at the presidential palace in Khartoum, a correspondent reported. It is expected to steer the daily affairs of the country during a transition period of 39 months.
• The line-up was formed after Sudan last month swore in a `sovereign council` a joint civilian-military ruling body that aims to oversee the transition.
• The 18 ministers were seen greeting members of the sovereign council, including its chief General Abdel Fattah al-Burhan, in images broadcast by state television from the palace.

• The United States and Turkey on September 8, 2019 began joint patrols in north-eastern Syria aimed at easing tensions between Ankara and US-backed Kurdish forces who battled the militant Islamic State group.
• Six Turkish armoured vehicles crossed the border to join US forces in Syria for their first joint patrol under a deal reached between Washington and Ankara, a journalist reported.
• Two helicopters flew over the area as the Turkish vehicles drove through an opening in the concrete wall separating the two countries.
• They then headed west with the same number of American vehicles, along with an ambulance and a pick-up, for the joint operation, before crossing back into Turkey.
• The Turkish defence ministry said drones were also deployed

6. Russians go to polls in test for Putin allies

• Russians voted in local elections on September 8, 2019 that will test the popularity of President Vladimir Putin and his allies after a crackdown on opposition protests in Moscow.
• Elections for municipal councils and regional governors took place across the country, but most attention was focused on Moscow, where tens of thousands took to the streets this summer after potential opposition candidates were barred from the vote.
• Police detained hundreds of the protesters and while most were quickly released some faced serious charges. In the week before the election, five were sentenced to jail time ranging from two to four years.
• The opposition has called for voters to punish the Kremlin and the ruling United Russia party at the ballot box.

• Saudi Arabia`s King Salman on September 8, 2019 replaced the energy minister with one of his sons, state media said, in a major shakeup as the OPEC kingpin reels from low oil prices.
• The appointment of Prince Abdulaziz bin Salman, half-brother to de facto ruler Crown Prince Mohammed bin Salman, marks the first time a royal family member has been put in charge of the all-important energy ministry.
• He replaces veteran official Khalid alFalih as the world`s top crude exporter accelerates preparations for a much-anticipated stock listing of state-owned oil giant Aramco, expected to be the world`s biggest.
• `Khalid al-Falih has been removed from his position,` the official Saudi Press Agency said, citing a royal decree. `His royal highness Prince Abdulaziz bin Salman is appointed minister of energy.

• The unanimous election of a neo-Nazi politician in Germany as the head of a town council has sparked outrage among senior political figures and calls to have the decision reversed.
• A political storm is brewing after Stefan Jagsch of the far right-wing extremist National Democratic Party (NDP) became council leader for the t own of Waldsiedlung, in the district of Altenstadt, 30 kilometres north-east of Frankfurt, on Thursday.
• Local reports say he was appointed by seven council members including representatives from German Chancellor Angela Merkel`s Christian Democratic Union (CDU), plus junior coalition member Social Democratic Party (SPD) and business-friendly Free Democratic Party (FDP).

• Tufail Abbas, one of the first leaders of the Communist Party of Pakistan, and founder of the erstwhile Orient Airways Employees Union passed away on September 8, 2019. He was 92.
• The late Abbas was born in a small town called Debai nearLucknowinIndiain1927.
• Mr Abbas was arrested and jailed several times when crackdowns on communists became the order of the day soon after the creation of Pakistan. He was first arrested in 1954 and then was jailed in 1960 following the arrest of Hasan Nasir, who died young in Lahore Fort.

• Britain`s Mo Farah won a record sixth successive Great North Run after setting his personal best time on September 8, 2019.
• The Olympic gold medalist raced ahead of Ethiopian Tamirat Tola in the final mile to cross the line in 59 minutes and six seconds.
• Farah, double Olympic champion at both 5,000 and 10,000 metres, said the race was an ideal preparation for October`s Chicago Marathon, with his sights set firmly on running at the Tokyo Olympics next year. 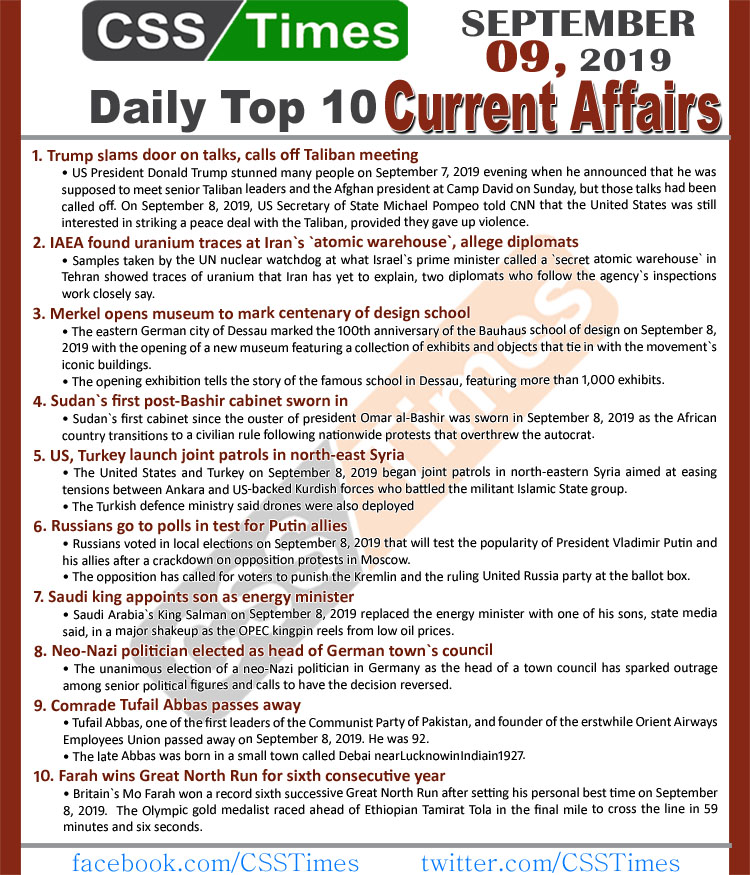