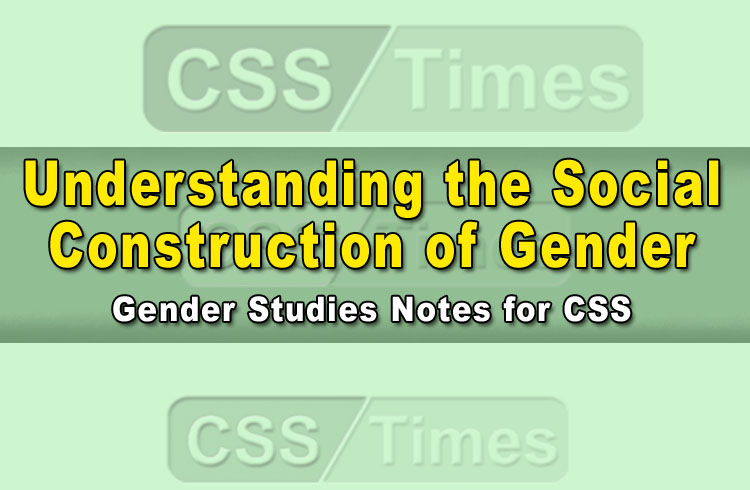 Differences in socialization of males and females offer insight into the factors fostering differences in behavior between the genders and across cultures within the same gender. There is a deeply rooted social belief in U.S. society that there are certain roles, attitudes, behaviors and traits that are distinctly associated with gender or biology. While male and female are terms that describe a person’s biological sex, masculine and feminine notions are socially constructed “genders” in which ascribed traits like sex and achieved characteristics such as femininity and masculinity are highly variable from one culture to another. In Mexican culture, women are socialized to be much more submissive to men than American women. As Kulis et al. report on the results from a study of Mexican women living in the American Southwest, “Less acculturated Mexican American girls reported both the lowest masculinity scores and the highest submissive femininity scores.”

Gender is more than a set of behavioral norms. Culture tends to divide the sexes, on the basis of gender, into distinct categories whose members are assumed to share particular abilities and personality traits. Gender is a structural feature of society more than an inherent concept, just like social class. Gender traits – attributed or acquired – permeate every interaction between men and women in both formal and informal and intimate and professional environments. Although the pattern in contemporary society is toward a greater form of egalitarianism than in the past, this pattern is not universal. Women, in the main, are still socialized toward undertaking the so-called “dependent” roles of wives and mothers, while men are socialized toward regarding themselves as more independent and less nurturing than women. These patterns of socializing gender are important in that they affect the ways in which males and females perceive themselves and construct their external affects. For instance, conversational style (men talk; women listen) is one external effect of gender differences. Even so, some patterns of behavior associated with gender roles and duties in U.S. society are changing toward a more egalitarian form. A report from the National Study of the Changing Workforce revealed that “the average working father spends 42 minutes more on housework now than in 1977”

We see in the work of many women and men an attempt to overcome limiting roles and values that are linked with gender. Pollack’s book on creating real boys is an effort to provide a model of education and parenting for boys that will undermine the negative impact of “straitjacketing” notions of masculinity Many female artists have produced works in response to what they find the oppressive nature of the social construction of gender. In Marge Piercy’s (born March 31, 1936 is an American poet, novelist, and social activist). Poem “Barbie Doll”, we see a female speaker who is described as others as being “pretty” only after she dies from cutting off her nose and legs. Piercy’s speaker perceives herself as ugly because she has “a great big nose and fat legs.” The “girl child,” as Piercy calls her, tells us she was socialized in the ways of girls and was “presented dolls that did pee-pee / and miniature GE stoves and irons / and wee lipsticks the color of cherry candy” We see in the speaker’s upbringing or socialization process that society often associates values, behaviors and norms with gender and then reinforces them by the way they raise boys and girls. To get a boy, the girl child of the poem is told to “play coy,” “come on hearty,” and that she needs to “exercise, diet, smile and wheedle” One can see how this often leads to anxiety, depression, and feelings of low self-worth in females who do not equate to idealized images