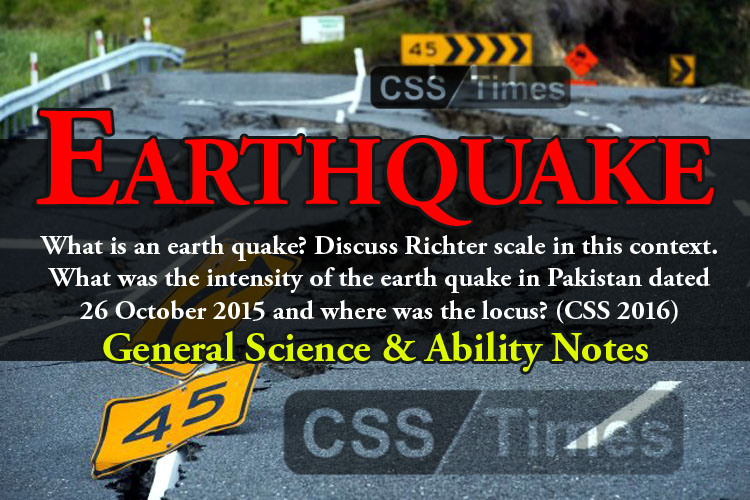 Q: What is an earth quake? Discuss Richter scale in this context. What was the intensity of the earth quake in Pakistan dated 26 October 2015 and where was the locus? (CSS 2016)

Earthquake shaking of the Earth’s surface caused by rapid movement of the Earth’s rocky outer layer. Earthquakes occur when energy stored within the Earth, usually in the form of strain in rocks, suddenly releases. This energy is transmitted to the surface of the Earth by earthquake waves. The study of earthquakes and the waves they create is called Seismology (from the Greek seismos, “to shake”). Scientists who study earthquakes are called seismologists.

Anatomy of an Earthquake

Seismologists know from observations that most earthquakes originate as shallow-focus earthquakes and most of them occur near plate boundaries—areas where the Earth’s crustal plates move against each other. Other earthquakes, including deep-focus earthquakes, can originate in subduction zones, where one tectonic plate subducts, or moves under another plate.

Stress in the Earth’s crust creates faults, resulting in earthquakes. The properties of an earthquake depend strongly on the type of fault slip, or movement along the fault, that causes the earthquake.

The sudden movement of rocks along a fault causes vibrations that transmit energy through the Earth in the form of waves. Waves that travel in the rocks below the surface of the Earth are called body waves, and there are two types of body waves: primary, or P, waves, and secondary, or S, waves. The S waves, also known as shearing waves, move the ground back and forth.

Most earthquakes are caused by the sudden slip along geologic faults. The faults slip because of movement of the Earth’s tectonic plates. This concept is called the elastic rebound theory. The rocky tectonic plates move very slowly, floating on top of a weaker rocky layer. As the plates collide with each other or slide past each other, pressure builds up within the rocky crust. Earthquakes occur when pressure within the crust increases slowly over hundreds of years and finally exceeds the strength of the rocks. Earthquakes also occur when human activities, such as the filling of reservoirs, increase stress in the Earth’s crust.

Plate tectonics is the theory that Earth’s outer shell is divided into several plates that glide over the mantle, the rocky inner layer above the core. The plates act like a hard and rigid shell compared to Earth’s mantle. This strong outer layer is called the lithosphere.

Developed from the 1950s through the 1970s, plate tectonics is the modern version of continental drift, a theory first proposed by scientist Alfred Wegener in 1912.

The plates are all moving in different directions and at different speeds (from 2 cm to 10 cm per year–about the speed at which your fingernails grow) in relationship to each other. The plates are moving around like cars in a demolition derby, which means they sometimes crash together, pull apart, or sideswipe each other. 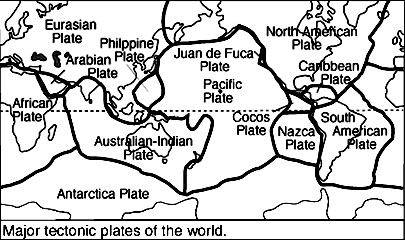 The place where the two plates meet is called a plate boundary. Boundaries have different names depending on how the two plates are moving in relationship to each other

Molten rock, called magma, is stored in reservoirs under volcanoes. As this magma moves upwards, it can fracture the rock it squeezes through, causing earthquakes, usually with magnitudes not much greater than 5.0. Sometimes the magma collects in a high level reservoir prior to a volcanic eruption and as it moves around it causes bursts of continuous vibration, called volcanic tremor. Because of these precursors, seismographs (earthquake recorders) are very useful for monitoring volcanoes to give warning of an impending eruption.

Foreshocks are smaller earthquakes that may occur in the same area as a larger earthquake that follows. They are caused by minor fracturing of rocks under stress prior to the main break that happens during the largest earthquake of the series, called the main shock. Foreshocks can start up to a year before the main shock

Earthquakes caused by the Isostatic Adjustment

As the crust re-adjusts to the lighter load (isostatic rebound to achieve equilibrium) it transfers stress to other parts of the crust. If there is a fault near enough to the new stresses, that can add enough stress to cause the fault(s) to move and that can produce an earthquake. This is not the major cause of earthquakes but New Madrid in the US may have some of that effect but don’t quote me on that because there are other things going on to cause fault movement there. Very few things happen in isolation. Since this process happens over a great length of time, such earthquakes are more minor than

Two separate studies are providing insights into the earth-shaking consequences of the controversial gas extraction process known as fracking. Both studies confirm that processes linked to the extraction of oil and gas through hydraulic fracturing, or fracking, can trigger manmade earthquakes Fracking involves blasting water, sand and chemicals deep into the ground to fracture rock to obtain oil and natural gas. Energy companies are increasingly using the technique across Canada, where there is already regular seismic activity and an ever looming threat of various sized tremors. The U.S. Geological Survey is set to release its findings April 2012 that a “remarkable” increase of quakes in the U.S. midcontinent since 2001 is “almost certainly” the result of oil and gas production.

Most earthquakes are causally related to compressional or tensional stresses built up at the margins of the huge moving lithospheric plates that make up the earth’s surface The immediate cause of most shallow earthquakes is the sudden release of stress along a fault, or fracture in the earth’s crust, resulting in movement of the opposing blocks of rock past one another. These movements cause vibrations to pass through and around the earth in wave form, just as ripples are generated when a pebble is dropped into water. Volcanic eruptions, rock falls, landslides, and explosions can also cause a quake, but most of these are of only local extent. Shock waves from a powerful earthquake can trigger smaller earthquakes in a distant location hundreds of miles away if the geologic conditions are favorable.