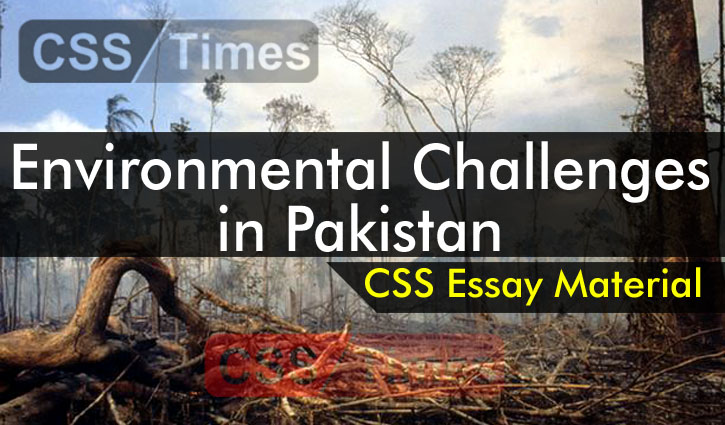 As a big importer of renewable natural resources and a large consumer of fossil fuels, Pakistan’s Ministry of Environment takes responsibility to conserve and protect the environment; however unfortunately there are many challenges. While we grow more than 8 percent in GDP and create economic opportunities, this increase adds growing stress and implications on the environment. The constant growth in population is another massive challenge. As we grow economically, we have to decide that we achieve a better quality of life. At the end of the day, when we have more money but our quality of life suffers and we can’t breathe and drink pure water; then it is not worth it.

A number of serious environmental problems are inherent in the country, which are of great ecological concern in terms of its sustainable economic future. These include soil erosion, pesticide misuse, deforestation, desertification, urban pollution, water logging and salinity, freshwater pollution and marine water pollution, just to name a few.

Perhaps the main contributor to their intensity is population growth, which is very high in contrast to the natural limited resources that are available to the people. Also included in the constraints is the unsustainable use and management of these resources. Around 179 million people live in this country, making it the 6th most populous country in the world. The rate of population growth is one of the fastest and according to estimates it would double in just 25 years. What is obvious from this is, if the population continues to grow at this rate, it would take a severe toll in the environment. Unfortunately Pakistan is not endowed with resources required to sustain such a huge population. Although it is primarily an agricultural country, the landscape is mainly arid. Water, already a scarce commodity in most parts of the country, is now facing further shortages. This is also due in part to inadequate distribution and the coercion of the “water-tanker mafia.” Pakistan’s energy use is excessively inefficient. It’s GDP per unit energy used is 4.0, which ranks it 69th out of 110 countries for which data is available. This waste of energy is combined with the need to import fossil fuels and as a result there is a very low productive per capita use of energy.

Pakistan suffers from water pollution from raw sewage, industrial wastes, and agricultural runoff. There exists limited natural fresh water resources, and a majority of the population does not have access to potable water. Scant attention is devoted to pollution. In 1987 only 6 percent of rural residents and 51 percent of urban residents had access to sanitary facilities. Greater success has been achieved in bringing potable water within reach of the people, with nearly half the population enjoyed such access by 1990.However, researchers at the Pakistan Medical Research Council, recognizing that a large proportion of diseases in Pakistan are caused by the consumption of polluted water, have questioned the “safe” classification in use in the 1990s. Even the 38 percent of the population that receives its water through pipelines runs the risk of consuming seriously contaminated water, although the problem varies by area. In Punjab, for example, as much as 90 percent of drinking water comes from groundwater, as compared with only 9 percent in Sindh. The central government’s Perspective Plan (1988–2003) and previous five-year plans do not mention sustainable development strategies. Further, there have been no overarching policies focused on sustainable development and conservation. The state has focused on achieving self-sufficiency in food production, meeting energy demands, and containing the high rate of population growth, not on curtailing pollution or other environmental hazards. In 1992 Pakistan’s National Conservation Strategy Report attempted to redress the previous inattention to the nation’s mounting environmental problem. Drawing on the expertise of more than 3,000 people from a wide array of political affiliations, the government produced a document outlining the current state of environmental health, its sustainable goals, and viable program options for the future.

The poor cannot deal with the impacts of a degraded environment. Their habitats are environmentally vulnerable and they do not have access to many facilities. As a result they are prone to diseases because they live in low-income houses usually in industrial areas and have little choice in the quality of their nutritional intake. This increases their vulnerability to diseases, which they do not have the capacity to treat. They have minimum access to health services and spend long hours in polluted work places (factories) or work as unskilled labor. In the rural areas also, the poor usually work as labor on somebody else’s farm and the incessant use of pesticides and fertilizers increases their exposure to health risks.

Degradation of the Urban Environment

Urban growth is estimated to be 4.6 percent per year. This is mainly a consequence of the high rate of rural-urban migration that contributes to the rapid decay of urban environment. Estimates indicate that 6 million (16 percent) people are unemployed and this is expected to increase by 500,000 annually. The increase in population, unemployment, and pressure on agricultural lands means migration to urban areas. The migrants usually are poor and are forced to live in urban slums. Out of the total population 45 percent of the people in Sindh and 50 percent in Punjab live in one-room houses. They often are not linked to water supplies and sanitation. The reason is their lack of financial resources and the administration does not provide these because that might give them legal status. They also do not invest in their residences as they either do not have the money or are afraid of being evicted. When the utility services are not available, unhealthy practices are adopted. Waste is dumped out in the open and becomes a source of water contamination.

Water contamination causes serious problems and water supply standards set by the World Health Organization are rarely met. Fifty percent of the population has access to piped water and the rural water supply coverage in 1997-98 was 90 percent according to an appraisal done by the World Bank. However this did not take into account the private sector’s provision of potable water. The surveys by UNICEF/Ministry of Health, give different indications. In the 1995 survey by UNICEF (Multiple Indicator Cluster Survey), it was revealed that 17 percent of the rural households have piped water and 52 percent had family hand pumps. Water quality is deteriorating due to biological contamination from human waste, chemical pollutants from industries and agricultural inputs and salinity. Piped water also gets contaminated because pipes are laid very close to sewerage lines or open drains and chemicals like chlorine, which is mixed to kill bacteria, corrode the supply lines.

Message for the youth

This environmental movement is your movement and we can fight environment degradation through a movement because of the young people of Pakistan. If we want to make a better Pakistan for future generations, youngsters (male and female) should actively take part and learn about the issues and try to tackle the problems. One of the best solutions is to change our bad habits of water waste, electricity and dispersal of garbage.