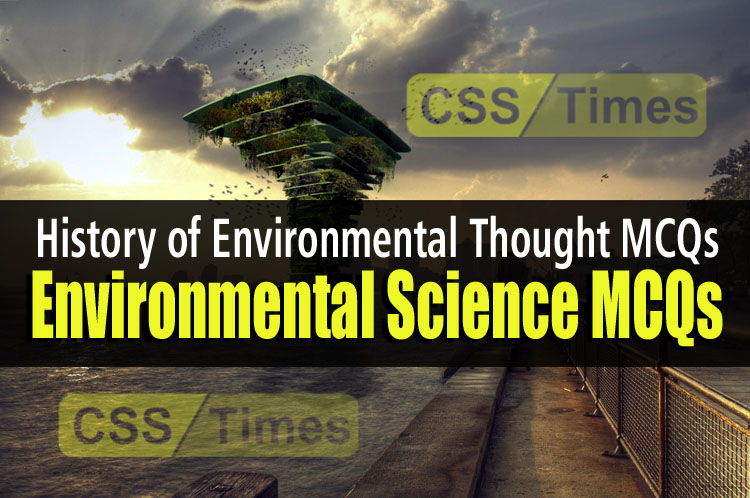 What is sustainable development?
(a) The development that meets the needs of the present without compromising the ability of future generations to meet their own needs.
(b) To conserve natural resources and to develop alternate sources of power while reducing pollution and harm to the environment.
(c). It is the practice of developing land and construction projects in a manner that reduces their impact on the environment by allowing them to create energy efficient models of self-sufficiency.
(d). All of the above
Answer: (d)

Consider the following statement(s) related to the Sustainability.
(a) It refers to a process or state that can be maintained indefinitely.
(b) Natural resources must use in ways that do not create ecological debts by over exploiting the carrying and productive capacity of the earth.
(c) A minimum necessary condition for sustainability is the maintenance of the total natural capital stock at or above the current level.
(d) All of the above
Answer: (d)

Which of the following is/are not an objective(s) of sustainable development?
(a) Continue to implement the family planning program.
(b) Maintain a dynamic balance of arable land(not less than 123 million hectares) and implement an agricultural development strategy
(c) Maintain a dynamic balance of water resources by reducing water consumption for every unit of gross development product growth and agricultural value added
(d) To bring about a gradual and sometime catastrophic transformation of environment
Answer: (d)

What are the Primary Goals of Sustainability?
(a) The end of poverty and hunger
(b) Better standards of education and healthcare – particularly as it pertains to water quality and better sanitation
(c)To achieve gender equality
(d) Sustainable economic growth while promoting jobs and stronger economies Code:
(e) All of the above
Answer: (e)

Which of the following is not included in the parameters of sustainable development?
(a) Carrying capacity
(b) Inter and Intra-generation equity
(c) Gender disparity and diversity
(d) None of the above
Answer: (d)

Which event associated with the World Environment Day is celebrated to inspire people reduce energy consumption at the workplace?
(a) Earth Day
(b) Eco- Action Day
(c) My Earth My Duty Day
(d) Cycling Day
Answer: (b)

Which ORG was started by Mikhail Gorbachev to build upon the work started by the 1992 Earth ORG?
(a) Red Cross(b) Green Cross
(c) Green Peace(d) None of these
Answer: (b)

The World Commission on Environment and Development made an important report in 1987. What was it called?
(a) Our Common Future
(b) Mission World Possible
(c) Visible Future
(d) None of these
Answer: (a)

Where was the Stockholm conference on Human Environment held?
(a) Sweden(b) Austria
(c) Norway(d) Greece
Answer: (a)

The Access and Benefit Sharing(ABS) Protocol adopted by COP- 10 at Nagoya is regarding the fair and equitable sharing of benefits arising from the use of:
(a) The genetic resources of the earth.
(b) Exclusive Economic Zones(EEZs)
(c) Marine and coastal areas significant for ‘eco-tourism’.
(d) Technology transfer mechanisms for Clean Energy Development.
Answer: (a)

Which among the following multilateral convention seeks to protect the human health and environment from Persistant Organic Pollutants(POPs)?
(a) Bonn Convention
(b) Stockholm Convention
(c) Rotterdam Convention
(d) Basel Convention
Answer: (b)

With which of the following, the Agenda 21’ of Rio Summit, 1992 is related to?
(a) Sustainable development
(b) Combating the consequences of population explosion.
(c) Mitigation norms of Green House Gases(GHGs) emission.
(d) Technology transfer mechanism to developing countries for ‘clean- energy’ production.
Answer: (a)

Which of the following is / are correct statements regarding the ‘Cartagena Protocol’ on Biosafety?
(a) It is a supplementary treaty to the UNFCCC.
(b) It establishes 10 headline targets known as the ‘Aichi Targets’.
(c) both a & b
(d) None of these
Answer: (a)

Which among the following terms of utmost significance in the dynamics of resource management was coined in the ‘Brundtland Commission Report’?
(a) Polluter-Pays Principle
(b) Sustainable development
(c) Inclusive Growth
(d) Carrying Capacity
Answer: (b)

With reference to the Flexible Mechanisms of Kyoto Protocol, which of the following is / are correct statements?
(a) Through Clean Development Mechanism(CDM), any Annex I country can invest in emission reduction projects in any other Annex I country as an alternative to reducing emissions domestically.
(b) Through Joint Implementation(JI), countries can meet their domestic emission reduction targets by buying greenhouse gas reduction units from(projects in) non Annex I countries to the Kyoto protocol(mostly developing countries).
(c) Both a & b
(d) None of these
Answer: (d)

All species of ‘Lemur’ are endemic to which among the following places of the world?
(a) Seychelles Islands
(b) Galapagos Islands
(c) New Caledonia
(d) Madagascar
Answer: (d)