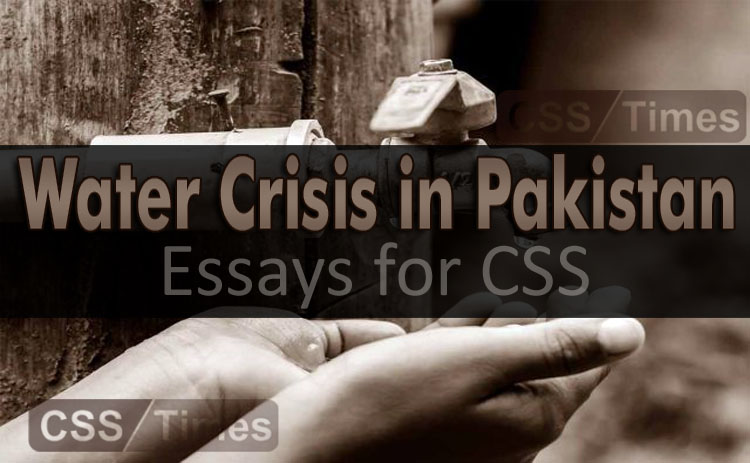 Water security has a direct impact on human security. It is a multidimensional challenge with complex undertones, as water security is both an increasing concern as well as critical for sustainable development. Before it is too late and Pakistan faces a drought across its entire territory, a comprehensive water policy needs to be prepared and implemented.

In Pakistan we utilize the water available to us for different purposes. The basic utilization is for irrigation and then used for power generation, drinking and also provided to some Industries.
A. Irrigation
Out of 240.22 maf, 172.21 maf water is utilized for irrigation purposes as shown on the view foil. In this the canal diversions is 105.23 maf; system loses are 144-40; rainwater is 6.0 maf; ground water is 41.30 and utility above rims is 5.28 maf.
B. Power generation
Water released by the hydropower plants returns to the river system. The reservoirs are operated on priority bases only for irrigation. Recent increase in thermal generation has reduced the potential conflicts between water releases from reservoirs for hydropower generation and irrigation. Now most of the annual storage is utilized for irrigation and not for hydropower, but conflicts do arise at times.
C. Drinking
Most of the rural and urban water is supplied from ground water through tube wells and hand pumps except few cities like Karachi and Islamabad/Pindi. Total urban and rural (domestic and commercial) requirements estimated is 10-15% of the surface water, out of which 80% return to the system, however with degraded quality. Net consumption is normally about 2% of the total water available.
D. Industry
Water is also utilized in Industries basically for cooling purposes and also in manufacturing processes. This utility is less than 1%.

A. Water supplies are vulnerable and suffer from extensive losses
B. Limited storage capacity
C. Trans-boundary disputes intensifying river supply vulnerability
D. Outdated distribution system and inequitable distribution of water
E. Groundwater resource depleting rapidly due to over-pumping
F. Extremely low water tariffs are distorting incentives for water conservation
G. Low recovery and underfunded water infrastructure contributing to high water losses
H. Gaps in governance leading to inefficient management
I. Climate Change – a Major Emerging Challenge for Water Sustainability
J. Reduced rainfall
K. Poor water management
L. Poor handling of industrial wastewater
M. Climate change
N. Lack of political will to address the governing issues
O. Change in food consumption pattern and lack of proper water storage facilities
P. Ignorance at the household level
Q. Wastage of drinking water in non-productive means
R. Corruption in water sector
S. Mismanagement in irrigation sector
T. Hydrological warfare- water terrorism by India
India started almost every project without informing Pakistan which is in violation of IWT
1. Manipulation of the treaty terms
There is a restriction of aggregate storage allowed to India over western rives via Annexure E of the treaty. India, however, is manipulating this provision by building a series of storages on western rivers, increasing storage and water regulation capabilities manifold.
2. Construction of Kshanganga dam
India has recently awarded a tender for construction of 330 MW Kshanganga hydro-electric project (HEP), which will be built on Indian tributary (Kishanganga) of Jhelum River. Pakistan has announced a similar project on Pakistani side of River Jhelum. According to IWT, the country that completes the project first will win the rights to the river. Hence, despite costing 68% more than estimated, India is endeavoring to finish the project first.
3. Construction other dams on Western rivers
India has plans to construct 62 dams and hydro-electric units on Rivers Chenab and Jhelum thus enabling it to render these rivers dry by 2014.19
U. Worrying level of deforestation
V. Scientific implementation of water policy

A. Effects on agriculture in general and on economy in particular
The adverse effects of water shortage on agriculture would have a spiraling effect on the prevailing level of poverty.
1. Less water means less agricultural yields and to fulfill the food requirements of the nation, we will be dependent on other countries.
2. Raising livestock is the main source of livelihood of rural areas. it is also an important economic activity, which contributes 9.7% of gdp, will be affected due to shortage of water.
3. Orchards of Pakistan bring home a healthy amount of foreign exchange, which can be affected due water shortage.
4. Due to less production of main crops, which are wheat, cotton, sugar cane and rice, the Industries related to them will suffer adversely.
5. Then due to drought and more dependency on ground water for irrigation, the water table will go down, and this will cause water constrains to the population.
6. Less agricultural outputs will compel people to head towards urban areas for jobs, which will increase the unemployment further.
7. The distribution of water is controlled from the center by IRSA (Indus river system authority) as per 1991 agreement between the provinces. Now the shortage of water will cause disputes between the provinces, which may cause harm to the national integrity.
B. Implications resulting from India’s terrorism
1. Risk of breaching ITW
India’s future energy and water demands, which are enormous, can compel her to undertake projects in violation of IWT. Certain quarters in India are already saying that IWT is more of a binding for India and should therefore be abrogated.
2. Possibility to divert water
Though India does not have the capability to divert water from the western rivers at present, however, possibility of a project similar to China’s Great South-North Water Transfer Project can not be ruled out.
3. Internal and external political and armed conflicts
Any reduction in water inflow to Pakistan at this stage will cause shortage of water for irrigation and if supplemented by adverse climatic conditions and other internal water mismanagement issues, can trigger inter-provincial water conflicts of serious magnitude. If India is found violating IWT at that point in time, then it will spark serious differences between India and Pakistan and might become prelude to a major conflict.
4. Negatively Impacting agriculture and damaging social life
Most recently, water flows in Chenab has declined by 40 per cent to about 6,000 cusecs from a 10 year average of about 10,000 cusecs, mainly because of construction by India of over a dozen hydropower projects upstream, reduction in rainfall and diversion of river waters. Incase India resorts to stoppage of water as per her capability, 406 Canals and 1125 Dis tributaries will become dry rendering 0.35 million acres of cultivated land barren and eventually ruining a total of 7.0 million acres of fertile land. India’s decision to go ahead with Kishanganga HEP and four other dams in India administered Kashmir is geared not so much towards meeting its own needs as impoverishing Pakistan. Agriculture is Pakistan’s backbone and water flowing in the channels is its blood line. It contributes 21% to the GDP and employs 45% of labour force.24 Adverse effects of water shortage on agriculture would have a spiraling effect on the prevailing level of poverty leading to economic and social problems.
5. Lose of water annually
To fill Baglihar Dam, India had consistently obstructed Chenab’s flow; resultantly Pakistan received only 19,351 cusecs on 9 October 2009 and 10,739 cusecs on 11 October 2009, when it should be receiving a minimum of 55,000 cusecs per day. Total loss was approximately 321,000 MAF of water. India has gained a water holding capacity on western rivers which can seriously affect water inflow at Marala HWs / Mangla Dam causing acute shortage of water for winter crop. Though, presently India is not capable of diverting water, possibility of a project similar to China’s Great North-South Water Transfer Project cannot be ruled out.
6. Effecting economic growth
The growth rate of Pakistan’s agriculture is already decreasing due to water shortages. In order to achieve the required growth targets in agriculture, Pakistan needs an estimated 149 MAF of water in 2000, 215 MAF in 2013 The shortage of surface water will result in drought and more dependency on ground water for irrigation, hence water table will go down causing water constraints to the population.
C. Threats to federalism
D. Effects on health sector
E. Floods and drought
F. Impending war with India
G. Energy shortage/crisis

A. Building dams and reservoirs
1. Water development
The construction of following dams should start immediately:-
a. Chasha dam
It would be located 200 miles upstream of terbela on river Indus. its gross storage capacity would be 7.3 maf and live storage 5.7 maf. Its power generation capacity would be 3360 mw.
b. Kalabagh dam
Kalabagh dam site is located 132 miles down stream of Terbela. Its gross storage would be 6.1 maf. It would have a power generation of 3600 mw. Here I shall further suggest that the construction of Kalabagh be under taken only, once all the provinces are convinced and willing to cooperate.
c. Thal reservoir
It would be located on the right bank of Chashma – Jhelum link canal, along the western bank of river Jhelum. Its reservoir would have gross capacity of 2.3 maf.
d. Raised Mangla dam
in this the present Mangla dam would be further raised by 40 ft and thus increasing its gross capacity to 9.5 maf. In addition, its power generation capacity would be increased by 15%.
e. Mirani dam
The dam is located on Dasht River about 48 km of Turbat town in Mekran division. Its main objective is to provide water for irrigation. Its gross storage is 0.30 maf.
f. Gomalzam dam
It is located at Khajori Kach on Gomal River in South Waziristan, about 75 miles from Dera Ismail Khan. Its main objective will be to irrigate 132000 acres of land, power generation of 17.4 mw and flood control.
From these projects we shall be able to store additional 20maf of water.
B. The National Water Strategy
1. Water developments
2. Water management
C. Solutions to counter Indian water terrorism
1. Pakistan should highlight the importance of the issue on various international forums. Merely passing the political statements will not resolve the problem.
2. Indian intentions and needs should be distinguished on quantitative terms to highlight the real face of India among international community.
3. The treaty does not provide so many important issues like availability of water, effects of climate change and proportional increase or decrease of water in quantitative terms. Pakistan should look for proper strategic forum for deliberative discussion and policy options for these issues.
4. At present, renegotiating the treaty seems impossible and Pakistan has to relook its water policy in the given limits of treaty. Therefore, effective role of Indus Water Commissioners is the need of hour.
5. Interstate conflict can be managed through internal strength and same is the case with water conflicts.
6. Pakistani policy makers should understand the concept of conflict resolution and initiatives must be taken on capacity building as no one can compel any sovereign state (India or Pakistan) to act on morality.
7. There is serious need to work on water management as the available water is being wasted and the groundwater table is going below and below.

The writer is CSS English Essay and Précis teacher having specialization in English Literature, Linguistics and American Studies from NUML,Islamabad.He has also persued Media Studies at NUST.He is working as regional analyst with Columbia school of journalism..He contributes to Foreign Policy news,Dawn,Daily Times ,the News International ,and The Weekly Pakistan.He runs a Facebook page named as CSS Esaay Precis,and Current affairs with Saeed Wazir .He teaches English Essay and Précis in Islamabad.He can be reached at saeedwazir41@gmail.com .

The writer is CSS English Essay and Précis teacher having specialization in English Literature, Linguistics and American Studies from NUML,Islamabad.He has also persued Media Studies at NUST.He is working as regional analyst with Columbia school of journalism..He contributes to Foreign Policy news,Dawn,Daily Times ,the News International ,and The Weekly Pakistan.He runs a Facebook page named as CSS Esaay Precis,and Current affairs with Saeed Wazir .He teaches English Essay and Précis in Islamabad.He can be reached at saeedwazir41@gmail.com .