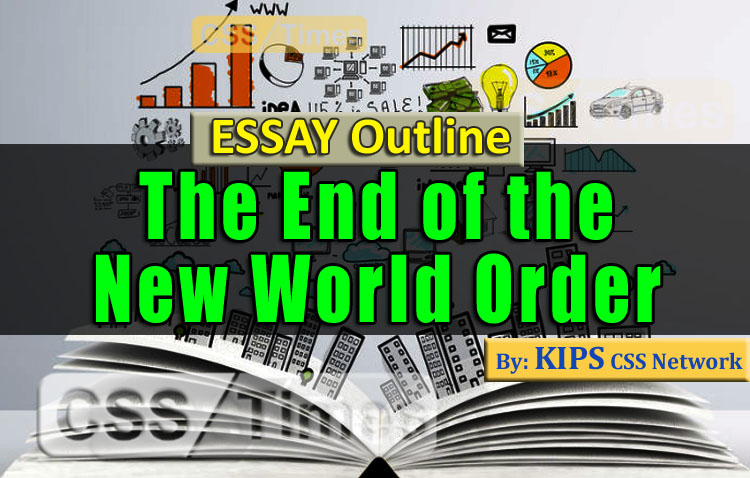 Essay Outline: The End of the New World Order

1.1 New World Order (NWO) unites all countries into one by forming blocs.
1.2 NWO reaches worldwide as it has limitless power.

3. How does the NWO seem to be ending in contemporary era?

3.1 Ending of NWO and the global politics
3.1.1 Rural-urban division has led common people to emphasize their government for their rights. i.e. Rural America voted Trump as Trump vows to create thousands of jobs for his people.
3.1.2 NWO ends historical rivalries of Cold War and promoting realism. i.e. friendship of
Trump and Putin fears Europe as Trump calls to obsolete NATO, Trump and Putin to build more nukes to safeguard their interests.
3.1.3 Replacing the global village with the concept of sovereign nation-state. i.e. Trump builds border to keep Mexicans at bay, countries across the world make their borders strong to curb the inflow of illegal immigrants. i.e. Bangladesh-Myanmar case.
3.2 Ending of NWO and the global economy
3.2.1 Ending of free trade policy. i.e. UK voted for Brexit and leaves EU, US to withdraw TPP, the concept of Post-Truth in 2016.
3.2.2 Crippling international organizations. i.e. Trump calls Paris Climate agreement, a hoax, Brexit affects EU monetary system.
3.2.3 Trump’s realistic views on trade policy.i.e. Accusing China of currency manipulator.
3.3 Ending of NWO and the global socio-cultural environment
3.3.1 Banning Muslim culture and immigration. i.e. Trump, Theresa May and Angela Merkel vow to get tough on Muslim immigrants and the Burqa ban in whole of Europe. i.e. Naveed Baloch was suspected over Berlin attack in Germany.
3.3.2 Islamophobia and terrorism in the West. i.e. Trump’s radical Islamism views, harassment of Muslims worldwide, spreading of IS.

5.1 Turning of globalized world into sovereign nation-states has posed challenges, which need to be encountered by promoting national power.
5.2 The concept of Post-Truth in contemporary era is more tilted towards realism than liberalism due to the victory of Trump in the US. This may lead to détente between US and erstwhile USSR.