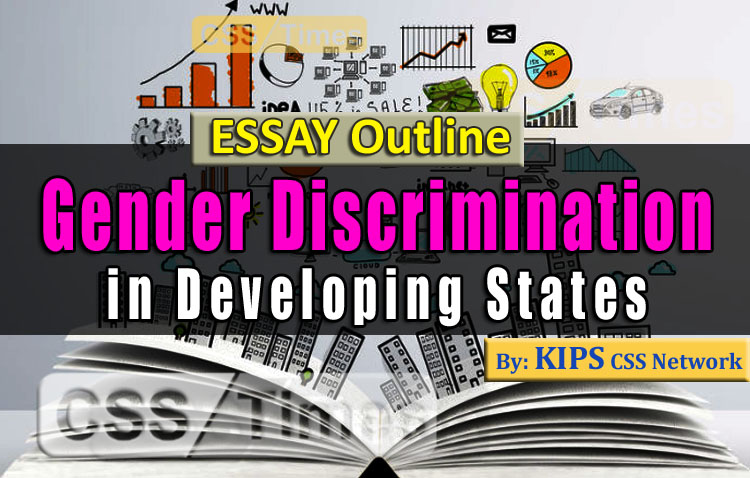 2. Historical perspective of gender discrimination and priority to male gender – the dominant gender in society.

3.1) Male dominant society, putting an axe over female voice and rights.
3.2) Third gender is considered as alien, and not a part of society.
3.3) Brutal practice of honor killings in Pakistan endangers the lives of females and the third gender. i.e: Qandeel Baloch murder and transgender Alisha murdered in Peshawar in 2016.

4.1) Impacts of gender discrimination.
Impacts on women
a) Low female literacy rate as compared to males in developing countries like Pakistan, Bhutan and Nigeria, as people are unaware about the importance of female education.
b) Female employment rate in Pakistan and India is 28% and 29% respectively, as compared to 80% in Netherland and 65% in China, because developing nations underestimate the importance of female in national development.
c) Increasing nation of crimes against women e.g. harassment, acid crimes, abduction,
trafficking etc.
• Bangladesh is considered as the country with largest number of acid attacks. It is also ranked 142nd out of 187 countries in 2013 on the Human Development Index and 115 out of 149 countries on Gender Inequality Index.
• National Crime Records Bureau states in 2010-1 bride murdered every hour over dowry demands in India.
Impacts on 3rd Gender
a) The ratio of population is divided into two specific genders, as in Pakistan male: female ratio is 49.51, but no attention towards approximately 3 lach third gender population.
b) No jobs and education facilities provided to third gender in developing states, as they are bound to engage themselves in inappropriate activities to earn for survival.
c) Third gender is getting obstacles among their way of self actualization, as they are not considered as a part of respectable fields like police, politics and medicine.

5. Comparison of developing states with MDCs in gender discrimination:

5.1) Australia and Germany, identified third gender as a part of society, and provided them birth certificates with gender “X”, whereas developing states are unable to provide them identity.
5.2) Countries like Andorra, Czech and Belgium are sustaining 100, 99 and 99% of female literacy rate whereas it’s 12% in Afghanistan, 38% in Bhutan and 42% in Pakistan.
5.3) In U.S.A. third gender is getting prominent over media, as they are getting popular over shows like “Dancing with stars”, whereas in developing states they are considered as sign of embarrassment and social taboo.

6.1) First women bank has been established in Pakistan with 50% of share holders and more than
50% of female employees, to utilize the potential of women in economic stability of nation. 6.2) UNDP in Pakistan focusing over gender equality and women’s empowerment to achieve millennium and sustainable development, and ensuring that women must have a real voice
in all governance institutions.
6.3) “The Hamsafar”, organization in India, that is taking care of the rights of third gender, India has also considered third gender as a part of nation, and has updated the passport application forms with three options, as male, female and Eunuch for third gender.
6.4) Pakistan has considered third generation as civilians of Pakistan and has given them their own I D cards and also provided them voting rights.

Check Also: Essay Outline | Flaws in Our Education System are Causing Some of Our Failures

1. In Pakistan Present Govt. (2014) being a state part to the convention on elimination of All Forms of Discrimination Against Women (CEDAW) lead the govt to take measures to ensure
women’s rights as envisaged in CEDAW.
2. Punjab Protection of Women against Violence Act 2016 passed to provide security, rehabilitation and relief against violence on women.
During the previous govt. (2008-2013)
2. 26 Shaheed Benazir Bhutto enters established for women for immediate relief to female
victims of violence – Around 1 million women could receive direct assistance from Benazir Income Support programme while National Commission on the status of women was strengthened to monitor the violation of women rights.
3. Adoption of Protection Against Harassment of Women at Workplace Act 2010.
4. Acid control and Acid Crime Act and prevention of Anti Women Practices Act.

8. Suggestions to neutralize the issues created by gender discrimination:

8.1) Required to promote the importance of female education, and needed to enhance their
enrollment in education sectors.
8.2) Females must be considered as the main part of society and their talent should be utilized to bring political, social and economic development.
8.3) Needed to bring change in social behavior, and third gender should be considered as a part of society, and they should get a chance to enhance their capabilities in better way.
8.4) Legislative and constitutional protection should be provided to third gender and their rights must not be neglected.