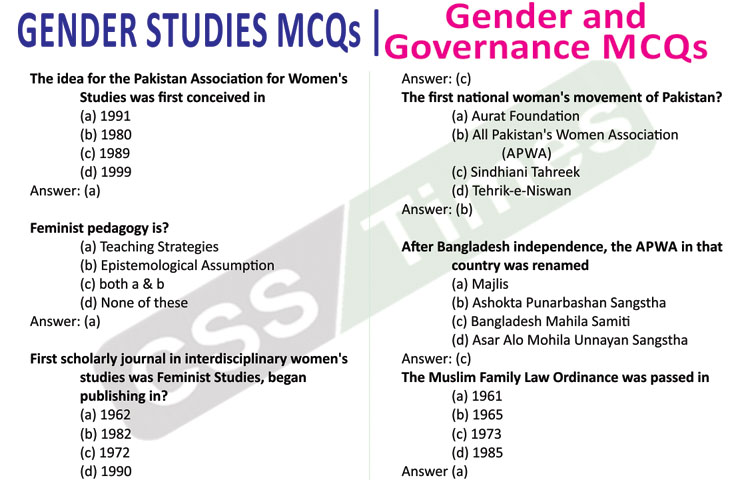 Feminist pedagogy is?
(a) Teaching Strategies
(b) Epistemological Assumption
(c) both a & b
(d) None of these
Answer: (a)
Explanation:
Feminist pedagogy is a way of thinking about teaching and learning, rather than a prescriptive method. As such, it is used in different ways and for differing purposes within and across disciplines and learning environments. Definitions of feminist pedagogy vary widely, but there is common agreement on these three key tenets:
• Resisting hierarchy: In the learning environment, the teacher figure and students work against the creation of a hierarchy of authority between teacher and student; the students also deliver ‘content’ and influence the design of the class.
• Using experience as a resource: As well as using traditional sources of information, such as academic journals and books, the students’ and teachers’ own experiences are used as ‘learning materials’. The purpose of using experience as a resource is twofold: firstly, experiences which have not been documented in academic work are brought into discussion, and secondly the class participants experience transformative learning…
• Transformative learning: Feminist pedagogy aims for the class participants (students and teachers) not just to acquire new knowledge, but for their thinking to shift in new directions. This may involve the realization that personal interpretations of experience or of social phenomena can be re-read and validated in new, critical ways

The first national woman’s movement of Pakistan?
(a) Aurat Foundation
(b) All Pakistan’s Women Association (APWA)
(c) Sindhiani Tahreek
(d) Tehrik-e-Niswan
Answer: (b)
Explanation:
APWA was founded in 1949 by Begum Ra’ana Liaquat Ali Khan, a famous activist for women’s rights, who said that the role of women is no less important than that of men. APWA received the UNESCO Adult Literacy Prize in 1974 and later the Peace Messenger Certificate in 1987

After Bangladesh independence, the APWA in that country was renamed
(a) Majlis
(b) Ashokta Punarbashan Sangstha
(c) Bangladesh Mahila Samiti
(d) Asar Alo Mohila Unnayan Sangstha
Answer: (c)
Explanation:
Bangladesh Mahila Samiti is a women’s organization in Bangladesh descended from the All Pakistan Women’s Association that was originally established in 1948. The Dhaka branch was opened in 1949. The organization works to improve awareness of legal issues, and to fund education and health access for women

The Muslim Family Law Ordinance was passed in
(a) 1961 (b) 1965
(c) 1973 (d) 1985
Answer (a)
Explanation:
The Muslim Family Law Ordinance was passed in 1961. The law determines the balance of power in marriage; a cornerstone of the Pakistani woman’s life story. The controversy and debate surrounding the advocacy and ultimately the passage of the law reflected the confusions about Pakistan’s identity that continue to plague the country today. The intent of the initial advocates which included Begum Raana Liaquat Ali Khan was to put some restraints on the practice of polygamy in Pakistan. This was ultimately not possible as, the religious lobby insisted that it was unIslamic to place restrictions on Muslim men wanting to have multiple wives. As with other insoluble problems, a Commission was created to look into the matter. Unsurprisingly, the Muslim Family Laws Ordinance that was passed in 1961 did not ban polygamy in the country. It did, however, create two provisions that sought to increase women’s power in the relationship. The first was the requirement that any man seeking to contract a second marriage had to obtain permission from an Arbitration Council. The second requirement was that all divorce proceedings had to be registered with the local Union Councils. This last provision meant that only oral pronouncements of divorce did not by itself constitute a legal divorce. This legislation, which has since been repeatedly challenged by opponents, continues to be the law governing marriage, divorce and consequently women’s lives in contemporary Pakistan.

In 1966, Madam Noor Jehan, who had migrated to Pakistan at Partition, received the
(a) Tamgha-e-Quaid-i-Azam
(b) Tamgha-e-Imtiaz
(c) Tamgha-e-Khidmat
(d) Tamgha-e-Pakistan
Answer (b)
Explanation:
Tamgha-e-Imtiaz which is the country’s highest civilian honour. Women had won the award before and would win it again but Madame Noor Jehan’s win was significant because it was representative of a feminine presence in the burgeoning cultural scene of a new Pakistan. Starting her career as an actress, Noor Jehan who came from a family of singers, reinvented herself as a playback singer in the 60s. Charming, uninhibited and unafraid, she was a public figure, a prominent one and a female one in a still patriarchal world.

Many of Pakistan’s women’s organizations gained their most ardent supporters during Military dictator Gen Zia era , forming the base of resistance against
(a) Military dictatorship
(b) Zina and Hudood Ordinance
(c) laws determined to reduce the stature of women in the society
(d) All of the above
Answer (c)
Explanation:
Martial law imposed in the late 70s brought for Pakistan women, perhaps the most significant challenges of the country’s existence. On February 22, 1979, self-appointed President General Zia promulgated four separate Ordinances.
These included the since notorious Zina and Hudood Ordinance which applied Hadd punishments to the crimes of adultery and fornication. After the passage of these laws, Pakistani women who were raped or sexually assaulted required four male witnesses to prove the crime. If they were unable to provide these witnesses, the victim herself could be prosecuted for fornication or adultery. Also passed as part of General Zia’s Islamization campaign was the Qanun-e-Shahadat law which reduced women’s testimony to count to half of male testimony in certain cases. Challenges test the mettle of those on whose shoulders they land, despite military rule and the threat of force, hundreds of women came out on the streets in protest.

Shaheed Benazir Bhutto was sworn as first woman Prime Minister of Pakistan on
(a) December 1, 1988
(b) December 2, 1988
(c) December 3, 1988
(d) December 4, 1988
Answer: (b)
Explanation:
On December 2, 1988, less than 10 years after Islamization, a Pakistani woman made history. Clad in the national green, Shaheed Benazir Bhutto was sworn in as Prime Minister of Pakistan becoming the first Muslim woman to be elected to such an office. Addressing the enormous crowd gathered outside Parliament for the occasion, Shaheed Benazir Bhutto said, We are gathered together to celebrate freedom, to celebrate democracy, to celebrate the three most beautiful words in the English language: “We the People”.
In that moment, Shaheed Benazir Bhutto became the woman who represented in one person the potential of millions of others, an icon of courage and an emblem of inspiration. Even though, the tragic events of the future were unknown then, the very fact of a woman’s leadership was for a Muslim country, a huge leap forward that would light the darkness of times to come.

Pakistan’s Federal Shariat Court swore in its first female judge Ms Ashraf Jehan in the 33 year history of its existence on
(a) April 28, 2014
(b) December 30, 2013
(c) June 30. 2013
(d) None of these
Answer: (b)
Explanation:
The appointment of Ms Ashraf Jehan, who had already been serving as judge in the Additional Court in Sindh province, represented an opportunity for Pakistani women to play an important role in the determination of religious law, a field from which they have been traditionally excluded.

Which of the following is NOT true of gender roles?
(a) Males are physically stronger on average than women.
(b) In most societies males pre-empt major centers of public power.
(c) Matriarchies existed in the past but were overthrown by men.
(d) There are many societies without marked gender inequalities.
Answer (c)

The belief that males are spiritually superior to females is
(a) expressed in Christianity, Judaism and Islam
(b) characterized by male dominated rituals and myths
(c) often not accepted by women who have their own gender ideologies
(d) all of the above
Answer (d)