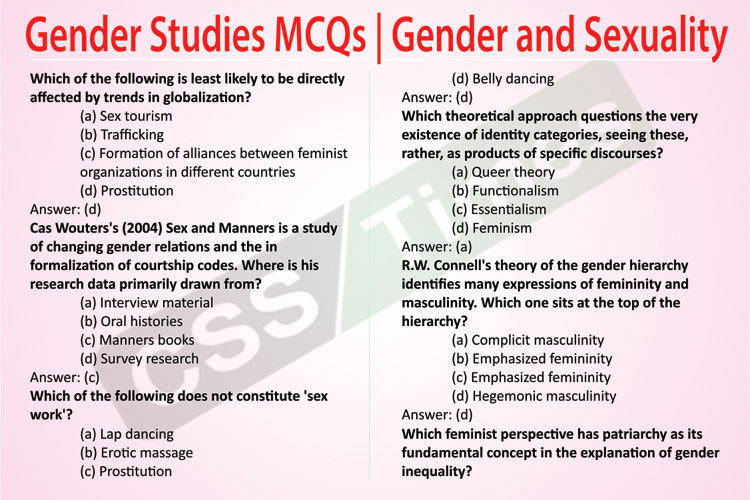 Which of the following is least likely to be directly affected by trends in globalization?
(a) Sex tourism
(b) Trafficking
(c) Formation of alliances between feminist organizations in different countries
(d) Prostitution
Answer: (d)

Cas Wouters’s (2004) Sex and Manners is a study of changing gender relations and the in formalization of courtship codes. Where is his research data primarily drawn from?
(a) Interview material
(b) Oral histories
(c) Manners books
(d) Survey research
Answer: (c)

Which theoretical approach questions the very existence of identity categories, seeing these, rather, as products of specific discourses?
(a) Queer theory
(b) Functionalism
(c) Essentialism
(d) Feminism
Answer: (a)

Which feminist perspective has patriarchy as its fundamental concept in the explanation of gender inequality?
(a) Liberal feminism
(b) Radical feminism
(c) Socialist feminism
(d) Marxist feminism
Answer: (b)

Which of the following is not one of the six structures of patriarchy identified by Sylvia Walby (1990)?
(a) Paid employment
(b) Male violence
(c) Household production relations
(d) Political parties
Answer: (d)

Which form of feminism is most closely associated with intersectionality?
(a) Postmodern feminism
(b) Black feminism
(c) Radical feminism
(d) Socialist feminism
Answer: (b)

Which one of these is not one of the three ‘crisis tendencies’ in the gender order identified by Connell?
(a) Crisis of institutionalization
(b) Crisis of sexuality
(c) Crisis of masculinity
(d) Crisis of interest formation
Answer: (c)

Which form of feminism draws on Marxist theory?
(a) Liberal
(b) Socialist
(c) Radical
(d) Postmodern
Answer: (b)

Queer Theory makes the claim that:
(a) heterosexuality is the normal and most desirable way to be
(b) the sexual categories and discourses we use are based upon true, underlying biological differences
(c) deviant forms of masculinity are seen as more threatening to the gender order than deviant forms of femininity
(d) all sexualities are pluralistic, fragmented and frequently reconstructed
Answer (d)

A hierarchical system in which cultural, political, and economic structures are dominated by males is a(n) ______________.
(a) Patriarchy
(b) Gendered division of labour
(c) Pluralist model
(d) Elite model
Answer: (a)

According to the text, the terms masculinity and femininity are most closely linked to _______
(a) Sexism
(b) Patriarchy
(c) Gender
(d) Sex
Answer: (c)

Gender roles refer to:
(a) Chromosomal and hormonal differences that cause inevitable differences in the behaviour of men and women.
(b) The rights, responsibilities, expectations, and relationships of women and men.
(c) The subordination of women based on the assumption of superiority of men.
(d) None of the above.
Answer: (b)

Which of the following terms refers to individuals’ beliefs and actions that are rooted in anti-female prejudice and stereotypic beliefs?
(a) Gender socialization
(b) Gender segregation
(c) Individual sexism
(d) Institutionalized sexism
Answer: (c)

The ____________ perspective combines the exploitation of women by capitalism with patriarchy in the home in its analysis of gender inequality.
(a) Radical feminist
(b) Democratic feminist
(c) Socialist feminist
(d) Liberal feminist
Answer: (c)

Which form of feminism is most committed to challenging the essentialist nature of the category ‘woman’?
(a) Liberal
(b) Socialist
(c) radical
(d) Postmodern
Answer: (d)