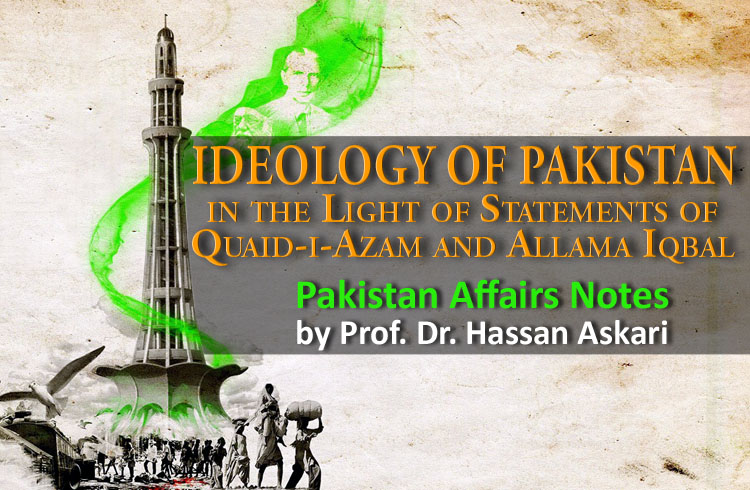 The sense of nationhood developed among the Muslims before the establishment of Pakistan. Their goal was mostly to protect and promote their identity and interests and shape their lives in accord with their ideals and philosophy of life without being overwhelmed by an unsympathetic majority. They adopted the strategy to get constitutional safeguards from the British against the cruel majority of Hindus but because of the antagonistic treatment from the rivals they set the goal of a separate state. Islam had central place to their further developments.

The role of leadership is very important to put nation on the way. A good leadership infuses the qualities of awareness, consciousness, mobilization, sense of direction, and defense against the adversaries. The Muslims were lucky having such competent leadership.

M. A. Jinnah was a history-making leader who changed the course of history. He possessed a visionary leadership, commitment to the cause and political mobilization capacity. He was a Charismatic Leader in the real sense of the meaning.

Jinnah played a decisive role in articulating the Muslim demands and pursuing these faced strong opposition from the Hindus and the British. He started his political career in 1906 by joining the Indian National Congress. He was elected to the Legislative Council in 1909 and in 1913 he also joined the All India Muslim League (AIML). Now he was member of both the political parties. Having disagreement with Gandhi on the issue of Swaraj (self-rule), complete freedom from the British and on using extra-constitutional means, Jinnah resigned from the Congress in 1920.

His early efforts to promote Hindu-Muslim unity were materialized when THE LUCKNOW PACT (1916) was signed. The Hindus accepted the Muslim demands:

In the Nehru Report, the accepted Muslim rights were ignored. Jinnah retaliated forcefully by presenting 14 Points in 1929. He defined Muslim identity and mobilized them with reference to Islam and convinced others that Muslims are different from the Hindus and the Congress. Islamic principles, concepts and symbols surfaced in his speeches and statements.

Jinnah used the term NATION for the Muslims of India in Feb 1935 (Legislative Assembly). He argued that the combination of religion, culture, race, arts, music and so forth make a minority a SEPARATE ENTITY. In March 1936 Bombay, he stated that the Muslims could arrive at a settlement with Hindus as TWO Nations. In 1937, he asserted that there is also a third party in India, the Muslims. In 1939, he roared that the Muslims and Hindus are two nations and they are going to live as a nation and playing part as a nation:

We are a nation with our own distinctive culture and civilization, language and literature, names and nomenclature, sense of values and proportion, legal laws and moral code, custom and calendar, history and tradition, aptitudes and ambitions; in short, we have our own distinctive outlook on life and of life. By all cannons of international law, we are a nation.

Jinnah believed in the force of Islam as he said that Islam is a dynamic force that can unite the Muslims. It can help to overcome the present crisis. It’s a source of inspiration and guidance providing ethical foundation, a framework, social order and civilization.

Guidance & inspiration for constitution-making and Governance

He also talked of the modern notions of state, constitution, civil and political rights and democracy. He assured that constitution of Pakistan would be framed by the elected assembly.

He gave assurance of equality of all citizens and rights and freedom to religious minorities in the new state.

VISION OF A SEPARATE MUSLIM STATE

Men like Allama Iqbal are born but in centuries. He was conscious of significance of Islam in lives of the Muslims. His first public appearance was in 1899 at the annual session of Anjuman Himayat-i-Islam in Lahore when he presented the poem, Nala-i-Yatim.

At initial stages Dr Iqbal was a nationalist by ideas and his poetry contained verses like Tarana-i- Hind. His poetry was a critique of the existing societal conditions. Being educated from Europe, he knew all weak aspects of the Western culture. He criticized capitalism, materialism and lack of spiritualism.

IQBAL- Focus on the conditions of the Indian Muslims

I would like to see the Punjab, NWFP, Sind, Balochistan amalgamated into a single state as a self government within the British empire or without. This is the final destiny of the Muslims of N.W. India.