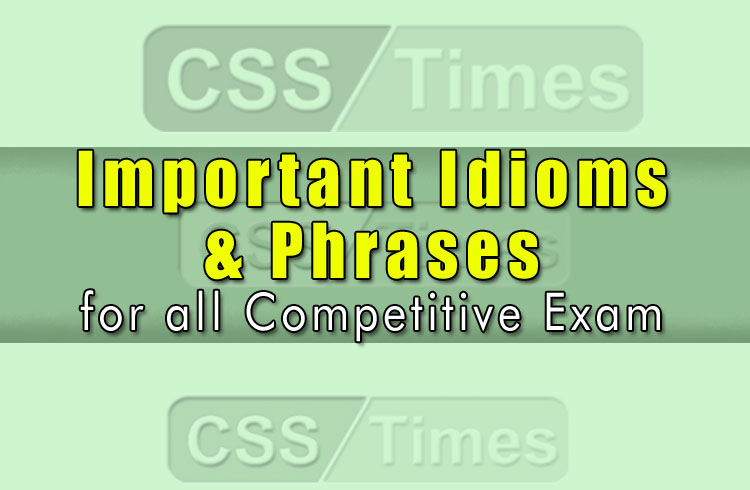 Back out — to withdraw from a promise, contract : I felt grieved when he backed out of his promise to help me.

Back up — to support; to sustain : He backed up his report with relevant statistics.

Bear upon — to be relevant to : This argument does not bear upon the subject under discussion.

Blow up — to explode : The mine blew up and all the labourers working inside were killed.

— to reprimand or scold : If you continue to be negligent, the teacher will blow you up.

Break down — of a car; a piece of machinery; to go wrong so that it will not function : The car broke down on our way to Mumbai.

— to collapse; to succumb to uncontrollable weeping : She broke down completely on hearing the news of her husband’s death.

— to succumb to a nervous collapse through overwork or worry : He worked so hard that his health broke down near the examination.

Break off — to end; to discontinue; to desist : We had to break off our conversation when he arrived.

She broke off in the middle of the story. She did not like his nature and broke off the engagement.

Break up — to disperse; to dissolve : The college will break up for the Puja holidays on 25th October.

The meeting will break up after the President has addressed the audience.

Bring up — to rear : Those brought up in adversity are able to cope with life better.

Call forth — to provoke : The minister’s views on the disinvestgment policy of the government called forth a good deal of bitter criticism.

Call out — to shout : I called out to him but he disappeared in the dark.

— to announce by calling or shouting : The Manager called out to the peon that he was being immediately fired.

Call upon — to order; to require : I was unfortunately called upon to give evidence against him.

Carry on — to continue : If you carry on working hard, your business will soon flourish.

— to manage : He carried on his business so well that he soon amassed a huge fortune.

Cast away — to throw aside : You must cast away all your apprehensions and accept the offer.

Catch up with — to overtake; to draw level : Last week I had to stay late at the office to catch up with some pending files.

Come off — to take place : The prize distribution came off on Tuesday last.

— to turn out successful : His speeches at the conference always came off beautifully.

Cry down — to deprecate; to make little of : You must not unneccessarily cry down the conduct of others.

Cry out against — to complain loudly against : The opposition parties cried out against the fast pace of the globalisation of the Indian economy.

Cut out — designed for : Your were cut out to be a lecturer in a college.

Drop in — to visit casually : On my way to the college, I dropped in at Mira’s place.

Drop out — As the race progressed, many children dropped out.

Fall back — to recede; to retreat : On seeing the armed guards, the civilians fell back.

Fall down — from a higher position to a lower one : The branch gave way and he fell down into the canal.

Fall off — to withdraw; to drop off : Some of our subscribers have fallen off. Friends fall off in adversity.

Fall under — to come under : This colony does not fall under my jurisdiction.

Get along — to prosper; to progress; to proceed : Well, doctor, how is your patient getting along? It is simply impossible to get along with him.

Get on with — to live pleasantly together; to progress : How are you getting on with your studies?

Get into — to be involved in : It is easy to get into scandals but hard to come out unscathed.
Give in — to surrender; to yield : I gave into her repeated requests and accepted the offer.

Give over — not to do any longer : It is time you gave over pretending that you have access to the Prime Minister.

Go after — to follow; to pursue : The policeman went after the thief but the latter managed to escape in the dark of the night.

Go down — to be accepted : The terrorist attack onWTC will go down in history as one of the worst acts of terrorism.

Go without — to remain without : he is so poor that sometimes he has to go without food.

Go by — to follow : I am sorry to disappoint you but we have to go by the rules.

— to elapse (used of time) : Months have gone by but I have not called upon him.

Hang about — to loiter near a place : Last evening I say your friend hanging about your house.

Hang upon — to depend upon : The success of any venture hangs upon the seriousness with which it is undertaken.

Hold out — to endure; to refuse to yield : How long can you hold out against starvation?

— to continue : Sugar stocks are not likely to hold out very long.

— to offer : She held out her hand to the Prince.

Hold to — abide by : Whatever resistance there might be, I will hold to my decision.

Keep off — to ward off : His stern looks keep off the flatterers.

— to maintain : They have been trying to keep up their standard of living though there has been a considerable decline in their income.

Keep up with — to keep pace with : You read too fast; I cannot keep up with you.

Knock out — to win by hitting the opponent insensible in a boxing bout : The challenger was knocked out in two minutes.

Lay By — to put away for future use : She has laid by five thousand rupees to celebrate her marriage anniversary.

Lay in — to store for future use : Anticipating scarcity of foodgrains, they laid in a good store of provisions.

Let down — to fail a friend : Won’t I feel grieved if my own friends let me down?

Let into — to suffer to enter; to admit : Despite his pleadings, they did not let him into the meeting. I shall let no one into my secrets.

Let out — to lease on hire : In my immediate neighbourhood, there is a decent house to let out.

Look about — to study one’s surroundings : The thief looked about himself before entering the house.

Look for — to search for : The old woman was looking for her spectacles.

Look up — to search for and find : Please look up this word in the dictionary.

— to have an upward tendency (said of prices): The price of sugar is loking up these days.

Make off with — to run away with : The servant made off with the master’s watch.

Makeover — to transfer : He has made over the building to his son.

Make up — to supply what is deficient : You must work hard during the Dussehra holidays and try to make up your deficiency in English.

to invent or fabricate : She made up a story to get rid of the visitor.

— to reconcile : They have made up their quarrel and are now getting on quite well.

Pass away — to die : His sister passed away in the early hours of the morning.

Pass by — to disregard; to omit : He did not invite me to his birthday. It appears that he passed me by.

— to go alongside of : You passed by my house the day before yesterday.

Pick out — to select or choose : The teacher picked out the best student from the class.

Pick up — to recover or regain health after an illness: He has become so weak that he will take two months to pick up.

Play upon — (a musical instrument) : She played upon the harmonium and sang a melodious song.

— to take advantage of : The blackmailer played upon her love for her husband.

Pull down — to demolish; to destory : The old house was pulled down to create space for multi-storey flats.

Pull up — to take to task : The teacher was always pulling him up for his bad handwriting.

Put off — to postpone : We had to put off the wedding till the war was over.

— to lay aside : He put off his shoes before entering the temple.

— to turn one aside from a purpose or demand: I approached him for some help but he put me off with mere words.

Put into — to drag into : Don’t put me into the argument.

Put out — to extinguish : It is time to put out the light and go to sleep.

— to perturb, to annoy : I was put out on hearing that I had incurred heavy losses in the recent business transactions.

Run away — to flee : The little girl took a necklace and ran away.

Run away with — to steal and depart with : The cashier ran away with twenty thousand rupees.

Run off — to break off from control : The dog broke the chain and ran off.

Run over — to drive over : The car ran over the pedestrian as he was crossing the road.

— to flow over : The tant is running over.

Run through — to squander or waste : It took him only a few months to run through all the money his father had left him.

— to read quickly : I will just run through this lesson and tell you what it is all about.

— to pierce : The needle ran through her finger when she was stitching her shirt.

See into — to attend to : You can set right the situation if you see to it at an early date.

Set in — to begin : As soon as rains set in, it beecomes pleasant.

Set up — to establish; to open a new business : He is soon going to set up as a financier.

Speak for — to recommend somebody or to urge somebody’s claims : If you speak form to the Manager, I am sure he will look at my case favourably.

Speak on — to deliver a lecture on : This evening I am going to speak on the changing concepts of morality in various ages.

Stand off — to keep at a distance : Would you please stand off? I brook no interference in my way of work.

Strike for — to stop work for some reason : The labourers have struck for higher wages.

Take after — to resemble : The younger sister takes after the elder one.

Take for — to form an impression about somebody’s identity : I was taken for a South Indian.

Take in — to deceive : She thinks her oily tongue can take everybody in.

Take to — to become addicted to : He took to gambling and drinking at a very early age.

— to form a liking for : Of late she has taken to painting.

Tell against — to prove adverse to; to go against : I am sure these facts are going to tell against your case.

Throw about — to fling here and there : to leave in disorder : The child threw his books about and ran off to play.

Throw away — to lose through carelessness : You have thrown away a golden opportunity.

Turn against — to become hostile to : I shall not give up my principles even if the whole world turns against me.

Turn aside — to deviate; to digress : Never turn aside from the path of virtue.