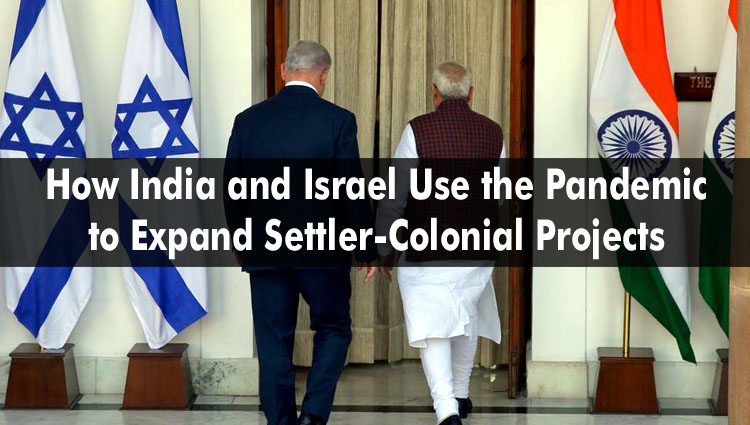 When France was distracted with a national election and a range of unresolved domestic issues in 1936, Nazi Germany seized it as an opportunity to violate the Treaty of Versailles by remilitarising the Rhineland. This buffer zone had been established in the aftermath of World War I to prevent it from threatening its western neighbours.

History is replete with examples of expansionist states using distraction and diversion as a weapon or element of surprise – as illustrated by Russia’s invasion of Georgia in 2008 when the world’s attention was fixated on the Beijing Olympic Games.

It’s no secret that world leaders often use foreign policy as a means to divert attention from political problems at home, as illustrated by the United States’ assassination of Iranian general Qasem Soleimani, which was likely carried out to distract from President Donald Trump’s impeachment hearing.

The words “never let a crisis go to waste” also ring loud and true for both Israel and India, with each using the fog of the Covid-19 pandemic to expand their respective settler-colonial projects in occupied or disputed territory and in defiance of international law.

Last month, the Netanyahu-Gantz government signalled its intention to formalise its annexation of the occupied West Bank by advancing a bill to be passed by the Knesset on July 1. A move that now enjoys the blessing of the United States, with Secretary of State Mike Pompeo recently telling reporters it’s “an Israeli decision.”

“We call on all Knesset members from the national parties to stand behind this legislation, to advance sovereignty and prevent the creation of a Palestinian state,” said Yesha Council head, David Elhayani, on Sunday.

No doubt, Israel’s sudden haste to annex stolen Palestinian land is driven by a belief that the international community is too distracted by the Covid-19 pandemic to care or protest, alongside genuine fears his rival will defeat Trump in November, given he trails his opponent, former Vice President Joe Biden, by significant margins in all of the battleground states.

“The building momentum in the country must not be stopped, even for a second,” thundered Israeli Defence Minister Naftali Bennett from his Twitter account last week.

Bennett was referring to the government’s decision to authorise the construction of 7,000 additional housing units in the settlement of Efrat, which constitutes a war crime “meant to deny Palestinians the basis for a real statehood and a viable economy,” according to the United Nations, and thus international law.

“The Trump Administration’s Annexation plan endorses everything that the illegal Israeli colonial-settlement enterprise is about: A racist narrative, violations of international law and the perpetuation of the denial of Palestinian rights,” said Palestinian official Saeb Erekat.

Across the other side of the world, India has taken its first steps towards replicating Israel’s settler-colonial model but in the disputed territory of Kashmir, where Indian security forces rule over the lives of 8 million Muslims with total impunity.

Last month, New Delhi passed a new set of laws for Indian administered Kashmir, including domicile rights for Indian citizens, paving the way for soldiers and their families, or specifically those who have lived in the territory for 15 years or longer, to purchase and own property.

“It should be no secret to anyone by now that the Government of the Bharatiya Janata Party wishes to do to Kashmir what Israel has done to the Palestinian territories,” Mr Shifat, a school teacher in Srinagar who wished only to be identified by his first name out of fear of Indian military reprisal, told me by phone.

“Giving land, homes and jobs to Indian soldiers and their families is how India will try to change the demographics here – no different to what Israel has done with its settlers in the West Bank.”

New Delhi’s motive is to facilitate and encourage “demographic flooding”, or rather make the Muslim majority a minority in their land – and kill any chance of a future independent Kashmiri state. This is the same way Israel has killed any prospect of a Palestinian state by migrating nearly one million Jewish settlers into the occupied Palestinian territories since 1967.

To that end, India has been upping the ante in Kashmir by escalating its military activities in the territory since the Covid-19 pandemic began, including moving heavy artillery into residential neighbourhoods and villages, to use as a base from which to target Pakistani military locations from its own bunkered positions. This is effectively using locals as human shields, to deter Pakistani military counter strikes.

“If we knew they would one day enter this area also and make us all human shields we would not have invested our lives into these houses,” a resident of Panzgam village told Middle East Eye. “We are crying with fear. Our children and elders are panicking.”

India’s recent aggression has not come without violence, with three civilians killed, including a woman and her child, when the two armies traded fire along the Line of Control in early April, and then with the recent killing of Kashmir’s top militant commander – Riyaz Naikoo.

One of the great tragedies of the Covid-19 pandemic, beyond the immediate death and economic destruction, will be the international community’s disinterest in resolving intractable conflicts and global human rights violations, given European, American and Asian nations will be focused on their survival, and not that of others in distant lands.