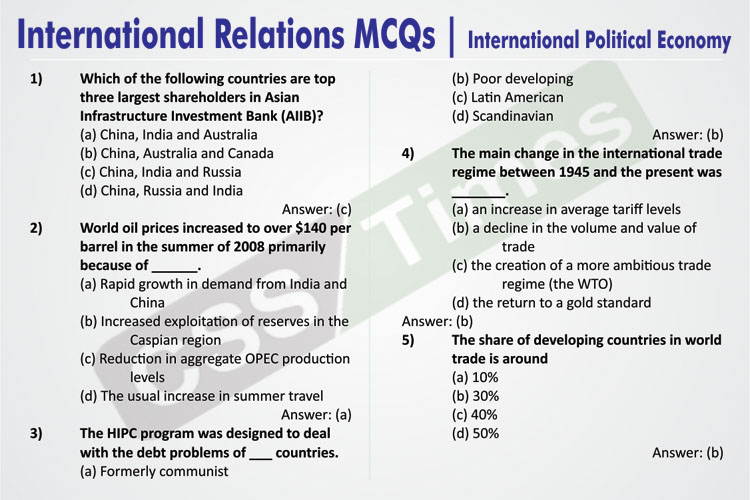 2) World oil prices increased to over $140 per barrel in the summer of 2008 primarily because of ______.
(a) Rapid growth in demand from India and China
(b) Increased exploitation of reserves in the Caspian region
(c) Reduction in aggregate OPEC production levels
(d) The usual increase in summer travel
Answer: (a)

3) The HIPC program was designed to deal with the debt problems of ___ countries.
(a) Formerly communist
(b) Poor developing
(c) Latin American
(d) Scandinavian
Answer: (b)

4) The main change in the international trade regime between 1945 and the present was _______.
(a) an increase in average tariff levels
(b) a decline in the volume and value of trade
(c) the creation of a more ambitious trade regime (the WTO)
(d) the return to a gold standard
Answer: (b)

9) The countries with the most rapid growth of merchandise trade during the past 30 years are
(a) The U.S., Germany, Japan, and France.
(b) The U.S., China, Japan, and Canada.
(c) The Republic of Korea, Taiwan, China, and Singapore.
(d) Ethiopia, Burundi, Colombia, and Sri Lanka.
Answer: (c)

11) The Bretton Woods Conference
(a) was held just after World War I.
(b) Established the International Monetary Fund (IMF).
(c) Established the World Trade Organization (WTO).
(d) all of the above.
Answer: (b)

15) The establishment of a common European currency was part of the
(a) Jamaica Accords.
(b) Maastricht Treaty.
(c) Berlin Protocol.
(d) Single European Act.
Answer: (b)

16) An arrangement under which a country fixes the value of its currency in terms of some “hard” currency such as the U.S. dollar is known as
(a) a crawling peg
(b) a currency board
(c) a fixed peg against a composite “basket”
(d) a crawling band
Answer: (b)

17) The international monetary system since the end of Bretton Woods has been characterized by
(a) Fully flexible exchange rates.
(b) Substantial variability in the exchange rates of the industrial countries.
(c) Exchange rate overshooting.
(d) b and c only.
Answer: (e)

23) Which among the following will be the base currency for BRICS New Development Bank?
(a) US Dollar
(b) Rupee
(c) Yuan
(d) Russian Ruble
Answer: (a)

25) An Index that estimates the true rate of exchange among currencies is:
(a) Human Development Index.
(b) Exchange Rate.
(c) Purchasing Power Parity
(d) None of these.
Answer: (c)

29) Which country would become the 19th member of Euro zone and the last Baltic nation to adopt the euro on 1 January 2015 as announced by the European Commission on 4 June 2014?
(a) Lithuania
(b) Latvia
(c) Estonia
(d) None of these
Answer: (a)

35) The Lapis Lazuli Trade Corridor does not pass through which of the following countries?
(a) Afghanistan
(b) Turkey
(c) Pakistan
(d) Georgia
Answer: (c)

38) Which among the following countries is not included in the Regional Comprehensive Economic Partnership (RCEP) negotiations?
(a) United States
(b) Japan
(c) China
(d) None of these
Answer: (a)

42) Which one of the following is not part of development?
(a) Economic growth
(b) Subsistence agriculture
(c) The reduction of poverty
(d) Improving levels of literacy
Answer: (b)

43) Which one of the following is an example of social development?
(a) People becoming more outgoing and sociable
(b) Growing consumption of American and European consumer goods
(c) Rising numbers of doctors and hospitals
(d) Better equipped and trained armies
Answer: (c)

44) Which one of the following best describes a Millennium Development Goal?
(a) A United Nations target for international sporting achievement
(b) A national target which secures immediate acceptance in almost any social group
(c) A global target of development to be reached over the next thousand years
(d) A target set by the United Nations to achieve progress in development
Answer: (d)

45) The world’s richer countries are generally referred to as which one of the following?
(a) Third world
(b) Global south
(c) First world
(d) None of these
Answer: (c)

46) Which one of the following is also known as ‘Africa plus’?
(a) The world’s poorest 20 countries
(b) The small number of countries apart from Africa facing a lack of development
(c) The three billion poorest people in the world
(d) The bottom billion
Answer: (d)

47) Which one of the following theories of development argues the only route to development is for developing countries to follow the example of the USA and other developed countries?
(a) Dependency theory
(b) Dominant development theory
(c) Modernization theory
(d) World systems theory
Answer: (c)

49) With which one of the following theories are the ‘five stages of economic growth’ associated?
(a) Classical Marxism
(b) McDonaldization
(c) World systems theory
(d) Modernization theory
Answer: (d)

50) Which one of the following is NOT an explanation for the underdevelopment of Third World countries used by dependency theorists?
(a) They are not sufficiently integrated into the world economic system
(b) They are exploited by richer countries
(c) They face problems which are imposed upon them by developed capitalist countries
(d) They are often ruled by groups who exploit their own people and prevent change that would benefit the majority
Answer: (a)