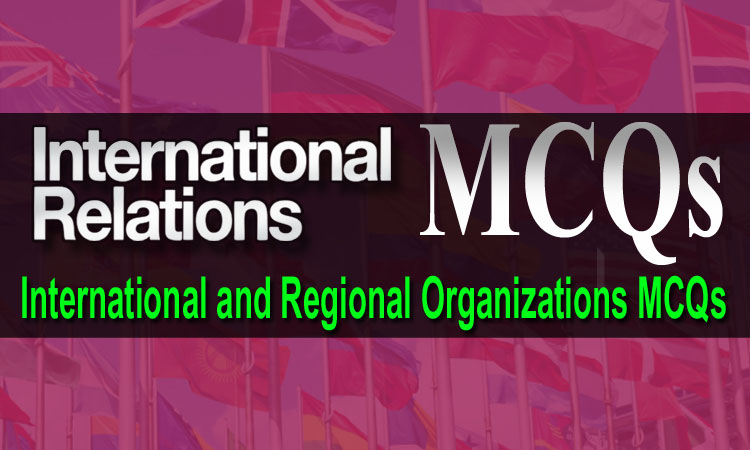 The most prominent feature of the EU’s policy towards Pakistan is the link established between its
(a) Economic and commercial policy
(b) Democracy and human rights
(c) Both a & b
(d) none of these
Answer: (c)

Pakistan wants to sign a free trade agreement with which international organization?
(a) European Union
(b) Eurasian Economic Union
(c) ASEAN
(d) None of these
Answer: (a)

The UN MDGs include what?
(a) Reducing Child Mortality
(b) Targets for Poverty Reduction
(c) Empowering Women
(d) All of the Above
Answer: (d)

Which of the following is not an MDG?
(a) Improve maternal health
(b) Achieve universal access to safe drinking water, sanitation and hygiene
(c) Ensure environmental sustainability
(d) Achieve universal primary education
Answer: (b)

Which of the MDGs does this UN graphic represent?
(a) Meet requirements for a growing population
(b) Develop a global partnership for development
(c) Support traditional families
(d) Increase public safety in communities and cities
Answer: (b)

MDG3 is to promote gender equality. Which of the following is not a target or indicator?
(a) Increase the number of female political representatives
(b) End gender-based violence
(c) Eliminate gender disparity in primary and secondary education
(d) Increase the share of women in waged employment
Answer: (b)

Which country was first to achieve the goal of halving extreme poverty?
(a) Zimbabwe
(b) Bangladesh
(c) Bolivia
(d) Ghana
Answer: (d)

Which was the venue for millennium summit?
(a) Paris
(b) New York
(c) London
(d) Rio De Janeiro
Answer: (b)

Which Report provided the basis of the goals in the area of peace and security?
(a) Samir Nasibi report
(b) Nabil Elaraby report
(c) Kofi Annan report
(d) Brahimi Report
Answer: (d)

Which of the following areas are emphasized by MDG?
(a) human capital
(b) infrastructure
(c) human rights
(d) all
Answer: (d)

Which of the following diseases are covered under MDG?
(a) HIV/AIDS
(b) Malaria
(c) Tuberculosis
(d) All
Answer: (d)

The UNO uses the Human development Index to:
(a) Predict, in order to prevent, which countries are most likely to engage in ethnic cleansing.
(b) Demonstrate how well a country is providing for its people’s welfare and security.
(c) Predict the %age of displaced people that will leave a failed state.
(d) Prove that the Global South is not
as poor as some have argued.
Answer: (b)

Which of the following is not a principal organ of United Nations Organisation?
(a) Trusteeship Council
(b) Economic and Social Council
(c) International Court of Justice
(d) Human Rights Commission
Answer: (d)

Official partners of World Food Programme are
(a) Europe Aid
(b) USAID
(c) ECHO
(d) All of above
Answer: (d)

Organization of Petroleum Exporting Countries was established in
(a) Austria
(b) Iraq
(c) Syria
(d) Saudi Arabia
Answer: (b)