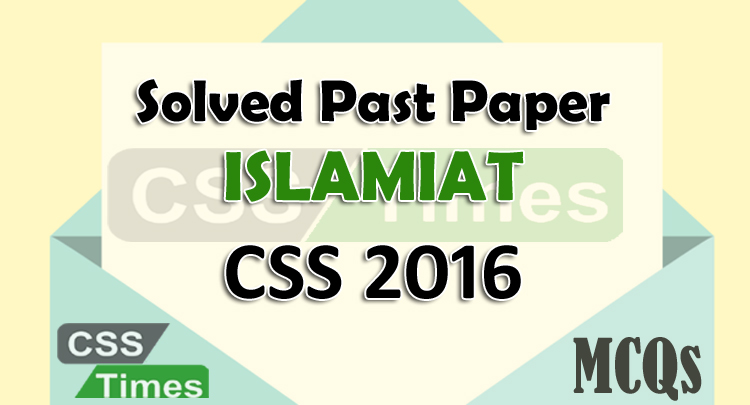 1) Umm Al-Masakeen is the title of?
(a) Hazrat Umme Habibah حضرت ام حبیبہ رضی اللہ عنہا
(b) Hazrat Zaynab bint Khuzayma حضرت زینب بنت خزیمہ رضی اللہ عنہا
(c) Hazrat Umme Salamah حضرت ام سلمہ رضی اللہ عنہا
(d) Hazrat Maimoonah حضرت میمونہ رضی اللہ عنہا
Answer: (b)
Explanation: She was 30 years old when her husband died in the battle of Badr, leaving her poor and with several children. She was the wife of Ubaydah bin Haris a faithful Muslim. Prophet Muhammad (PBUH) married her when he was 58 years of age. She was nicknamed Umm Al Masakeen because of her kindness and charity .She died 3 months after she married the Prophet (PBUH) 625 A.D.

2) Longest Surah of Quran?
(a) Al-Baqarah (the Cow)
(b) At-Taubah (the Repentance)
(c) Al-Mu’minun (the Believers)
(d) Al-Fat’h (the Victory)
Answer: (a)
Explanation: Verse 286 of surah al-Baqarah is deemed as the longest Surah of the Qur’an Al-Baqarah (the Cow) has been so named from the story of the Cow occurring in this Surah (vv. 67-73). Though it is a Madani Surah, it follows naturally a Makki Surah Al- Fatihah, which ended with the prayer: “Show us the straight way.” It begins with the answer to that prayer, “This is the Book (that)…is guidance…”

3) Jewish tribe expelled from Medina after Badr?
(a) Banu Qurayza
(b) Banu Nadr
(c) The Banu Qaynuqa
(d) Banu Shutayba
Answer: (c)
Explanation: There were three Jewish tribes in Medina: Banu Qurayza, Banu Nadr and Banu Qaynuqa. The most mischievous and courageous one among them was Banu Qaynuqa. They were jewelers. Therefore, they were quite rich. They had also signed a treaty with the Prophet (PBUH) just like the other tribes. They had promised that they would not attempt any activities against Muslims, that they would defend Medina against enemy in case of an external attack against Medina and that they would not help the enemies of each other. However, they had started to violate the treaty by their obvious mischievous acts and seditions, by trying to set Muslims against one another and by cooperating with the polytheists of Quraysh. The time given to Banu Qaynuqa to leave Medina was three days. When the period of three days ended, they set off to Damascus.

4) Longest Ayah of Holy Quran is in which Surah?
(a) Al-Ma’arij (the Elevated Passages)
(b) Al-Haqqah (the Inevitable)
(c) Al-Baqarah (the Cow)
(d) At-Takwir (the Overthrowing)
Answer: (c)
Explanation: The longest Ayah (verse) is the 282 Aya of Surat Al-Baqarah.

6) Sasanian family ruled the
(a) Cyprus
(b) Iran
(c) Tajikistan
(d) Azerbaijan
Answer: (b)
Explanation: The Sasanian Empire was the last pre-Islamic Persian Empire, established in 224 CE by Ardeshir I, son of Papak, descendant of Sasan. The Empire lasted until 651 CE when it was overthrown by the Arab Caliphate. It is considered by the Iranian people to be a highlight of their civilization, for after the fall of the Achaemenid Empire at the hands of Alexander the Great in 330 BCE until the fall of the Parthian Empire, there was not be another state that truly felt ”Iranian”.

8) In Battle of Khaybar, Jew warrior Marhab was killed by?
(a) Hazrat Ali
(b) Hazrat Abdullah Ansaari
(c) Hazrat Muhammed ibn Maslamah
(d) Hazrat Ja’far ibn Abu Talib
Answer: (a)
Explanation: Owing to the intrigues and overt acts of violence of the Jews, the Prophet (PBUH) was compelled to lead an expedition to Khaybar, a cluster of forts some ninety miles from Medina in the direction of Syria, where the Jews frorn the whole of Arabia had collected together, awaiting an opportunity to fall on Medina. Jew warrior Marhab himself came out to fight Imam ‘Ali, who had already killed two of his brothers before. The fight lasted for some time, and finally Imam Ali killed him. He then attacked the party accompanying Marhab, and during this fight his shield fell to the ground. Undaunted by ‘this accident, Imam ‘Ali went up to the gate of the fortress, unhinged the iron door, and using it as a shield fought until the citadel was conquered.

9) Queen Saba was the ruler of?
(a) Egypt
(b) Syria
(c) Yamen
(d) Taif
Answer: (c)
Explanation: In the Holy books of Judaism, Christianity, and Islam, the Queen of Saba stands as a outstanding figure: a genuine queen who ruled the lands of sands in ancient times. Her story, describing the encounter with Prophet Solomon and her subsequent embrace of his faith (Islam), permeated through centuries. The story of Saba’ is mentioned in the Sura Saba’ (34:15-19)

10) Inventor of Dark room
(a) Ibn Ishaq al-Kindi
(b) Al-Hasan Ibn al-Haytham
(c) Ibn al-Nafis
(d) Avicenna
Answer: (b)
Explanation: Born around a thousand years ago in present day Iraq, Al-Hasan Ibn al-Haytham was a pioneering scientific thinker who made important contributions to the understanding of vision, optics and light. Through his Book of Optics (Kitab al-Manazir) and its Latin translation (De Aspectibus), his ideas influenced European scholars including those of the European Renaissance. Today, many consider him a pivotal figure in the history of optics and the “Father of modern Optics”. Ibn al-Haytham is credited with explaining the nature of light and vision, through using a dark chamber he called “Albeit Almuzlim”, which has the Latin translation as the “camera obscura”; the device that forms the basis of photography

11) When was Battle of Khandaq fought?
(a) 6 AH
(b) 5 AH
(c) 7 AH
(d) None of these
Answer: (b)
Explanation: The Battle of Khandaq, which took place two years after the Battle of Uhud, is one of the important battles that had an important role in eliminating the barriers blocking the development of Islam. Battle of the Trench /Battle ofthe Khandaq was fought in 5 AH / 627 CE

12) Who was called as Abul Bashar e Sani?
(a). Hazrat Ibraheem (AS)
(b). Hazrat Shees (AS)
(c). Hazrat Noah (AS)
(d). Hazrat Uzair (AS)
Answer: (c)
Explanation: Hazrat Nooh (A.S) preached for almost 950 years. Abu-al-Bashar Sani is title of Nooh. He got hood at the age of 40 .According to the reports he’s burried somewhere in the masjid-ul-kharram of Makka. In total he is mentioned 43 times in the Quran. He was the great grandson of Nabi Idrees (A.S).

13) Ghazwa ______ is named as Youm-ul-Furqan?
(a) Badr
(b) Tabuk
(c) Uhad
(d) None of these
Answer: (a)
Explanation: The battle of Badr is one of the great events of human history that occurred on Friday, the 17th Day of blessed month of Ramadan in the second year after migration from Makkah to Medinah (624 CE) “Umair bin Al-Humam was the first martyr on the day of Badr.” The day of the Battle of Badr is also known as “Yawm al Furqan.“

14) Sihah Sitta is?
(a) As-Sirah Muslim Biography
(b) A Biography of the Prophet
(c) The Six Authentic Books of Hadith
(d) None of these
Answer: (c)
Explanation: There are six books on Hadis that the Ulema consider most authentic. ‘Sahah’ is the plural of ‘Saheh’ ehich means ‘correct’ or ‘authentic’. And ‘Sitta’ is the Arabic for Six. Hence six books on Hadis that have been termed most authentic by Ulema constitute Saha-e-Sitta.
The following books are in the Saha-e-Sitta and are hence the most authentic source of Hadis and Sunnat:
1. Saheeh Bukhari
2. Saheeh Muslim
3. Jaamia Trimzi
4. Sunnan Ibn-e-Maja
5. Sunnan Abu Daud
6. Sunnan Nasai

15) Invention of Omar Khayyám?
(a) Pin-Hole Camera
(b) Jalali calendar
(c) Chess
(d) None of these
Answer: (b)
Explanation: The Jalali calendar is a solar calendar that was used in Persia, variants of which today are still in use in Iran as well as Afghanistan. It gains approximately 1 day on the Julian calendar every 128 years.

16) Faith of reincarnation is found in?
(a) Buddhism
(b) Hinduism
(c) Taoism
(d) Zorastrianism
Answer: (b)
Explanation: Reincarnation, a major tenet of Hinduism, is when the soul, which is seen as eternal and part of a spiritual realm, returns to the physical realm in a new body. A soul will complete this cycle many times, learning new things each time and working through its karma. This cycle of reincarnation is called samsara.

18) Journey of Miraj happened in?
(a) 621 AD
(b) 623 AD
(c) 624 AD
(d) None of these
Answer: (a)
Explanation: Isra wal Miraj are two parts of the night journey that was taken by the prophet Muhammad (PBUH) In the first part, the Prophet (PBUH) traveled from Bait ul Haram to Bait ul Maqdas (Mecca to Jerusalem). This part of the journey in Arabic is described as Isra. The second phase of the journey was from Jerusalem to the heavens (Miraj). This event is briefly mentioned in the Quran in chapter 17. According to some scholars, the total event took a third of the night which amounts to around 3.5 hours (approximate date 23rd February 621 AD).

19) The word “BAHEEJ” means?
(a) Night visitor
(b) Beautiful, Convivial
(c) Gentle, Soft, Delicate
(d) None of these
Answer: (b)
Explanation: Baheej means beautiful, convivial. When used in description of plants it means those with a beauty and richness of color. Verse 50:7 is the second of two mentions.
And the earth – We spread it out and cast therein firmly set mountains and made grow therein [a plant] of every beautiful kind {50:7}