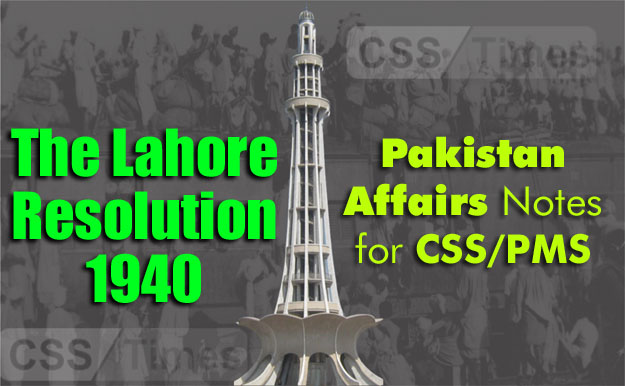 The experience of Congress Rule compelled the Muslims to launch the movement for separate homeland. The Hindus made them realize that Hindu government would mean an anti-Muslim rule in India. The Muslims’ disappointment from the Congress leadership decided to open a new phase of history. Quaid-i-Azam’s article in Time and Tide concluded that Muslims are a nation. No Constitution can be enforced by ignoring Muslims. His comments on March 13, 1940 are remarkable: “If some satisfactory settlement cannot be found for Muslims in united India, the Muslim will have to demand for division of the country.”

The Muslim League held its annual session at Lahore on 22-24 March 1940. The Lahore Resolution was moved by Maulvi Fazlul Haq and seconded by Ch. Khaliquzzaman that finally approved on March 24, 1940. Jinnah rightly expressed his valuable remarks about the political circumstances of India and the Muslims stand. He said:

“Indian problem is not communal but international. No Constitution can work without recognizing this reality. Muslims of India will not accept a constitution that establishes a government of the Hindu majority on them. If Hindus and Muslims are placed under one democratic system, this would mean Hindu Raj.”

Text of the Resolution:

This Resolution did not specify any demarcation of the territory but it defined the future plan of struggle for the establishment of the Muslims states (later the word ‘states’ was replaced by ‘state’ in 1946) in the Northwestern and Eastern areas where the Muslims were in overwhelming majority. It also intended to give importance to the autonomy of the states. There was no use of the word Pakistan but Pakistan was kernel of the Resolution.

The World War II started in 1939 that required heavily men powered battlefield. The British who always believe in bargaining announced an offer in August 1940:

The constitutional proposals for seeking Indian cooperation for war efforts:

The Hindus started Quit India Movement in August 1942 seeing British in trouble. The Muslim League stayed aloof and responded by saying that divide and quit India.

MK Gandhi did not accept the Hindus and Muslims as Two Nations and emphasized on the freedom of united India. Jinnah told him that the Muslims could never budge even a single inch from their ideological and constitutional demand.