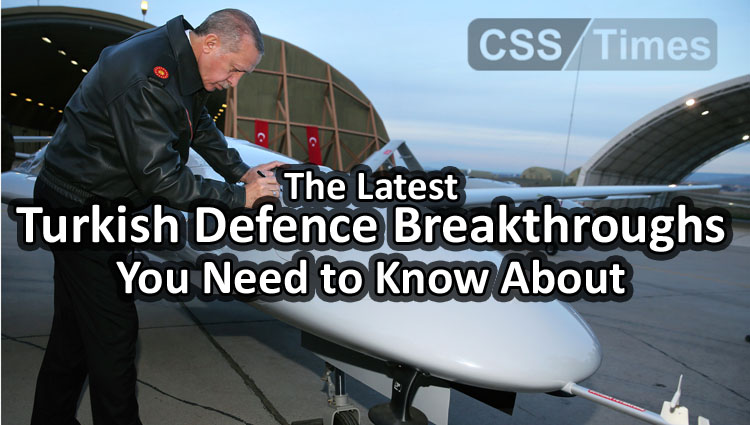 When Turkish drones destroyed Russian-made Pantsir air defence systems in Idlib province, Syria, it was considered a landmark moment that demonstrated the work Turkish defence companies have put in to ensure the country’s competence in the world of warfare.

But this is only the beginning because the 2020s are, by many, being considered a progressive time for Turkey’s Armed Forces, as the various platforms that are in development promise something fresh and quite different.

The country’s unmanned aerial vehicles (UAV) like the Bayraktar TB-2 and the Anka, pack a punch, and boast 55kg and 200kg combat payloads, respectively. They carry Roketsan-manufactured ‘small and smart’ solutions, such as the MAM-L, which has boosted their efficiency in combat.

In addition to this, the Akinci (Raider)’s profile will also soon no doubt grow, not least because the much-hailed Baykar-designed and produced machine, carries a powerful payload of 1,350kg.

This huge increase in combat capacity will enable the platform to arm itself with what is believed to be ‘game-changing’ amounts of munitions.

The combination of air-launched cruise missiles and drones, would suddenly offer the Turkish defence planners an option of ‘unmanned deep-strike missions’, because along with the SOM-A air-launched cruise missile, the Akinci will be able to deliver MK-82 and MK-83 bombs, These were upgraded to JDAM (Joint Direct Attack Munition) standards by TUBITAK SAGE when they were added to with a KGK (Wing-assisted guidance kit).

The GPS/INS-supported guidance enables these “once dumb bombs” to hit their targets from up to a range of 100km (depending on the drop altitude) and 10m of CEP (circular error probable).

The other significant unmanned aerial vehicle (UAV) will be Aksungur, which will carry a magnetic anomaly detector (MAD) and a sonobuoy, which are both essential tools for anti-submarine warfare (ASW).

There is no doubt that unmanned systems are cheaper to field and operate, and more expendable as they do not pose risk to innocent lives.

Turkish Aerospace Industries (TUSAS) is also said to be currently working on an even faster platform, a mighty drone that will go by the name of Goksungur and is being dubbed ‘the supersonic version of the Aksungur’.

Following the US Congress decision to suspend the sale of next-generation F-35 fighter jets to Turkey as a result of the country’s move to procure the Russian S400 missile system, Turkey’s president Recep Tayyip Erdogan announced that Turkey would look to domestically produce a long-range missile defence system of its own.

The US has also consistently turned down Turkish attempts to procure the MQ-9 Reaper drone and Patriot missile systems.

“As long as we remain only a user of technology, we cannot guarantee our freedom in any area,”  President Erdogan said.

The railgun is expected to eventually reach ranges of 100 KM or more and can be used as a stand-alone cannon to intercept ships, fighter jets or ballistic missiles. It can also be mounted on ships and transports easily.

Travelling at faster than Mach 7.5, the high-density metal round is boosted along an electromagnetically charged railway, and can reach speeds of up to Mach 8.5  (2,520 m/s), or seven times the speed of sound, making it incredibly difficult to defend or intercept.

Because the high density metal round carries no electronic components, it is optimised for stealth and cannot be countered using electronic warfare means, or jamming.

Turkey’s SAPAN makes it the third country after the United States and China to develop an operational rail-gun.

In the live test, the railgun performed successfully, penetrating a 1 meter reinforced bunker. It is expected to undergo further development, given its strategic value.

In a live test, the Laser gun hit a 3-millimetre target from 1.5 kilometres away. The laser gun is expected to be used in anti-aircraft defence platforms, and eventually in an anti-armour offensive capacity.

PULAT is designed to provide 360-degree protection against guided and unguided anti-tank missiles. It can also be used offensively.

The system is designed to operate in difficult environments and uses a radar to automatically eliminate incoming projectiles through dust, mud, snow and rain.

It can also be integrated into larger battlespace command networks, for faster reaction times.

“Thanks to the OPMER project we can now develop optical components which require precision technology with our own capabilities,” President Erdogan said.

The laboratory is set to push the cutting edge on satellite technology, rangefinders and targeting technology, and fine optical instrumentation necessary for advanced technology manufacturing.

Turkey’s Altay Main Battle Tank is set to enter mass production in 2020. The tank is equipped with a 120mm L/55 smoothbore gun, putting it in the top tier for tank accuracy. It also has a 7.62mm machine gun mounted to the right of its main gun, and an additional 12.7mm heavy machine gun on its turret. Using a 1800 horsepower engine, the Altay has a maximum speed of 70 km/h and can manoeuvre underwater at a depth of 4.1 meters.

The tank’s armour is a modular reactive composite, that can be easily replaced, reducing repair times, while also reacting with chemical outward force against incoming projectiles. The tank is designed to resist chemical, biological and radiological (CBR) attacks.

The Altay is equipped with a 120mm L/55 smoothbore gun, putting it in the top tier for tank accuracy. The tank also has a 7.62mm machine gun mounted to the right of its main gun, and an additional 12.7mm heavy machine gun on its turret. Using a 1800 horsepower engine, the Altay has a maximum speed of 70 km/h and can manoeuvre underwater at a depth of 4.1 meters.

The tank’s armour is a modular reactive composite, that can be easily replaced, reducing repair times, while also reacting with chemical outward force against incoming projectiles. The tank is designed to resist chemical, biological and radiological (CBR) attacks.