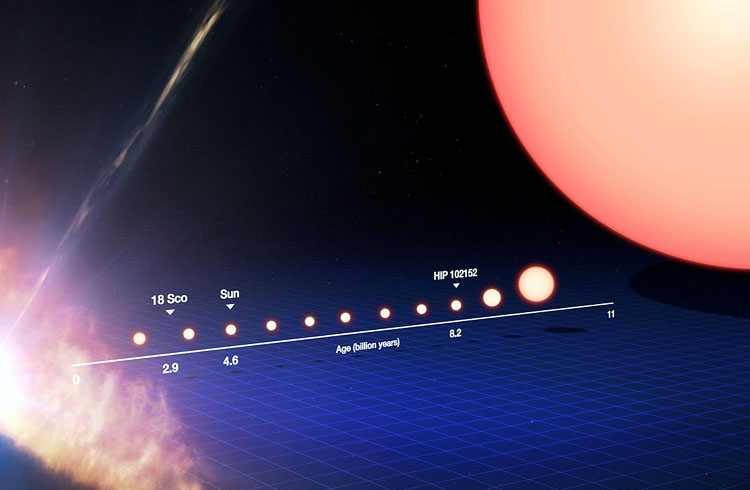 Stars begin their life as diffuse clouds of gas and dust known as nebulae. The cloud begins to contract under its gravity, and part of this matter will begin to heat up and form what is called a ‘protostar’. If this protostar reaches 15 million degrees Celsius, it is hot enough to start nuclear fusion.

The first step in nuclear fusion is binding two hydrogen atoms together to form helium. The energy produced by this nuclear reaction prevents a star from contracting under its own weight, and makes it shine.

A star of one solar mass will burn its hydrogen for about 10 billion years, until all the hydrogen has fused to form helium. Once this has happened, the core begins to contract and further reactions start happening in the shell around its core. Eventually, a star the size of the Sun will contract and become a cool white dwarf.

Larger stars, over three times the mass of our Sun, however, will be hot enough to become supergiants once their hydrogen runs out. Over the next millions of years they continue to produce heavier elements in shells around their cores.

Our closest star, the Sun, is a yellow dwarf. Once a star gets bigger than 1.2 solar masses it is classified as a red dwarf. The colour of a star depends on its temperature; the hottest stars are blue and the coolest stars are red.

Towards the end of a star’s lifetime, things start to go slightly awry as it begins to exit what is called the ‘main sequence’ – a kind of graph astronomers use to classify different kinds of stars depending on their mass and temperature.

When our Sun gets older it will swell and become a red giant – engulfing the inner planets, and possibly even Earth. Red giants are bright stars, up to eight times the mass of our Sun, in the last stages of life.

When stars eventually run out of fuel for fusion to occur, they can have a variety of possible fates depending on how large they started out.

White dwarfs are planet-sized, dense stars that form when low-mass stars, up to around eight times the size of our Sun, run out of fuel.

Possibly the most dramatic end to a star’s life is an explosion called a supernova. These huge explosions, that can reach as bright as 10 billion suns, only happen when massive stars run out of fuel.

There are two kinds of supernovae. The first happens in binary star systems when one of the two stars steals matter from its companion star. Eventually, the white dwarf accumulates too much matter, causing the star to explode, resulting in a supernova.

The second type of supernova occurs at the end of a single star’s lifetime. As the star runs out of nuclear fuel, some of its mass flows into its core. Eventually, the core is so heavy it can’t stand its own gravitational force and the core collapses, resulting in another giant explosion of a supernova.

Supernovae can leave behind either neutron stars, the densest stars imaginable, or if the explosion is big enough even black holes.