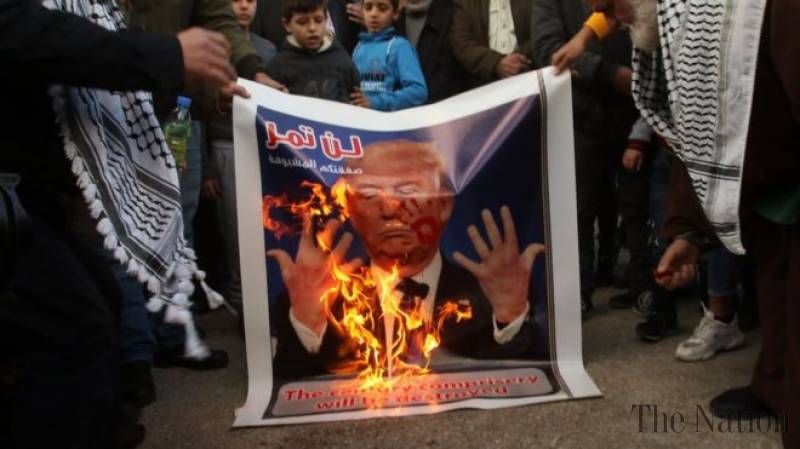 The Palestinians have roundly rejected Donald Trump’s Middle East proposal, feeling the cards are stacked against them.

The plan recognises and legitimises the Jewish settlements built on occupied Palestinian territory, which are regarded as illegal under international law – although Israel disputes this.

It would see Israel annex large swathes of the most fertile Palestinian land and gives complete security control of the West Bank to Israel in any future “state”. Those are just the headlines, and none are acceptable to the Palestinians.

Before announcing the proposal on Tuesday, Mr Trump even intimated that he knew Palestinian leaders would feel that way and would reject it.

So why release the plan at all? How does it all help the US president? And why now?

Israeli opposition figures have not shied away from suggesting that the timing of the proposal’s release was aimed at helping Benjamin Netanyahu in a general election to be held on 2 March.

Prime Minister Netanyahu could barely contain his glee at the news conference as he stood beside President Trump, his entourage cheering rapturously. The unprecedented concessions offered to Israel under the plan are something he can sell back home as a result of a close and influential relationship he has with the White House.

Trump administration officials have rejected the notion that the timing is designed to boost Mr Netanyahu, pointing to the fact that they had already waited two inconclusive Israeli election cycles before announcing the Middle East plan.

There is little doubt though that the Israeli prime minister will hope this will distract from the charges of bribery, fraud and breach of trust that he faces – charges he portrays as “fake news” and a witch-hunt by the left and by the media. That, of course, has been a familiar refrain of President Trump with regards to the current inquiry into his own behaviour.

The impeachment allegations suggest sordid and dishonourable use of his powerful position for personal political gain; withholding hundreds of millions of dollars of military assistance to Ukraine until Kiev opened investigations into Joe Biden and his son, Hunter.

White Evangelical Christian Americans formed a strong voting block for Donald Trump in 2016, with around 80% voting for him. Many Evangelical Christians believe that God promised the Holy Land to Jews and that their return to power across the whole territory will bring about the Second Coming of Christ. But that is not only helping to shape policy because President Trump wants their votes again in November.

There are also Evangelicals within the Trump administration itself, like Vice-President Mike Pence and Secretary of State Mike Pompeo, who have reportedly been pushing for the kind of support for Israel’s expansionist aspirations as detailed in the new plan.

Those aspirations all but do away with the notion of having sovereign Palestinian and Israeli states existing side by side, as previous US administrations had said they wanted. Evangelical Christians were huge financial backers of the Trump campaign in 2016, but there were others who would have wanted to see some return on the support they gave during the last election reflected in this proposal.

And among those in the East Room of the White House as the plan was unveiled was “megadonor” Sheldon Adelson. The casino billionaire paid tens of millions of dollars into Republican coffers and an estimated $20 million to the Trump campaign in 2016.

He was vocally supportive of the move to recognise Jerusalem as Israel’s capital, even offering to help pay for a new US embassy there. He cheered on the president as details of the new proposal were read out.

Whether the plan and the timing of its release is about backing Mr Netanyahu, distracting from impeachment troubles, playing domestic politics or if it is indeed driven by ideology, it comes with huge risks. It can be seen as a proposal that gives Israel the authorisation to broaden its occupation, already a source of misery for so many. The fear is that a proposal that gives Palestinians so little hope is one that also strengthens hard-liners across the region.