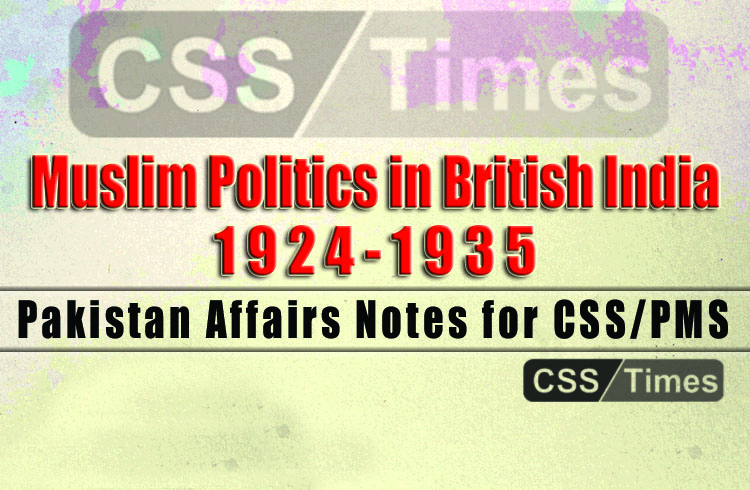 The Khilafat movement brought Hindu-Muslim communities to cooperation. The leaders made the efforts to revive harmony for preparing constitutional proposals.

Important Muslim leaders on the initiative of the Quaid met in Delhi to discuss constitutional and political issues. The major demands were:

If these demands are accepted, they will give up ‘separate electorate.’ Subsequently, the Muslim League was divided in the Punjab, Shafi League and Jinnah League. Sir Muhammad Shafi opposed Jinnah on the issues:

The main objective was to constitute proposals for the Indian Constitution. The Congress called All Parties Conference that appointed a 10-member committee in May 1928 under the Chairmanship of Motilal Nehru and Secretary ship of Jawaharlal Nehru.

Recommendations that threatened Muslim interests are:

Quaid-i-Azam tried to get amendments in the Report in the All Parties Conference in Calcutta but did not succeed. This is the very moment when Jinnah remarked, “it is parting of the ways.” He presented the 14 points as a Muslim leader.

These points reflected the aspirations of every Muslim living in India.

The British government sent a commission to seek the opinion of Indians on the future shape of constitutional arrangements. It arrived in India in 1927 and it published the report in 1930. Most political parties boycotted it. It presented its report containing several constitutional proposals:

First Session of the Conference

In the first session, a number of prominent Muslims like M. A. Jinnah, Sir Shafi, Maulana M. A. Jauhar, Zafarullah Khan participated. They emphasized federalism, self- government, safeguards for minorities, separate electorate, preferential representation in central legislature, secure majorities in Punjab and Bengal.

Maulana M. A. Jauhar had died after the first conference. Iqbal, Jinnah and others participated in the second conference. Gandhi represented the Congress. The key issues of the session were ‘Federation’ and ‘Minorities.’

The Congress expressed strong reaction against the right of separate electorate to the Indian minorities, especially to low caste Hindus whom Gandhi named Harijan (sons of God). Dissonance in Gandhi is conspicuous that he observed fast unto death on the right to the ‘sons of God.’ An agreement with low caste to surrender the separate electorate right was concluded to save Gandhi’s life.

The main issues had been discussed in the first two conferences and now the rest of them were to be discussed. It was poorly attended conference. Quaid did not participate despite living in London. Gandhi did not attend as he had been detained.

The conference brought no change in party positions and widened Hindu-Muslim gulf.

The British government issued a small document in the form the White Paper. It included detail of working basis of the Indian constitution with Dyarchy in the centre and full responsible governments in the provinces.

Despite these efforts the communal problems could not be settled as satisfactory to the nations living in India particularly the Muslim. Therefore the key issues remained unchanged: