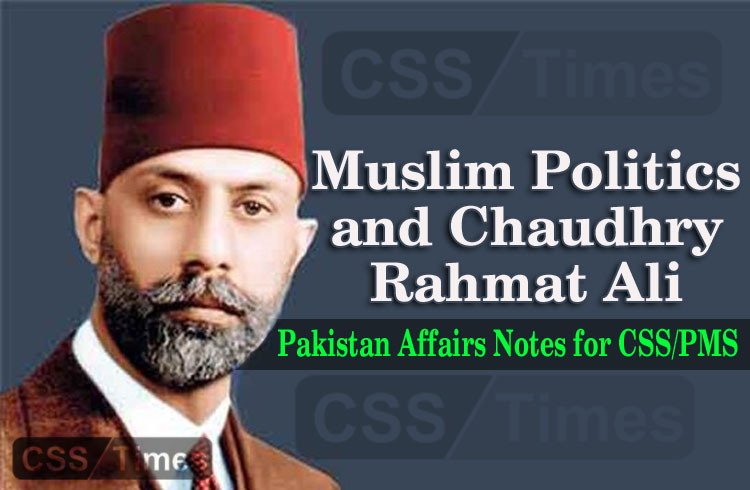 Intellectuals give lines of movement, leaders act upon and the masses prove good soldiers and this way nations accomplish their achievements. Rahmat Ali was one of the eminent scholars who made a significant contribution to the movement for the establishment of Pakistan. He was conscious of Muslim identity and outlined proposals for the partition of India for the sake of Muslims. He was the man who coined the name, PAKISTAN, for the Muslim state. When he first presented his proposal for a Muslim state, nobody took it seriously.

The Muslim intellectuals and leaders were concerned about the future of the Muslims in India. They ensured a secure future for Muslims. For this purpose they worked out various proposals for securing a homeland. Rahmat Ali becomes relevant here.

Ch. Rahmat Ali was born in Hoshiarpur district in 1893. Traditionally he did his B.A. from Islamia College, Lahore. He did the private and government jobs for some time and then left for Cambridge University for higher education.

He was involved actively in the activities for the protection of rights of the Indian Muslims along with some other students at Cambridge University. His activism goes back to his student days in Lahore when he talked of separate state for Muslims of India.

He said that North Western areas are Muslim majority ares. We will not only keep these majorities but will turn them into a Muslim state. Muslims should get rid of Indianism, it is better for Muslims and Islam.

In his writing, NOW OR NEVER (January 1933), he proposed the name of Muslim state, PAKISTAN.

INDIA cannot be described as a state/country or home of single nation. This state did not exist as one political entity before the advent of the British. The Muslims are a distinct nation who has maintained its identity throughout. They are a separate nation. They have as much right to live as the Hindus. Pakistan should be separated from the rest of India. He further said that the conflict between Muslims and Hindus is not religious, sectarian or economic but an international. The Muslims are striving for survival; Hindus are trying for domination over the other nations living in the Sub-Continent particularly the Muslims.

He established the Pakistan National Movement in 1940. He began to talk about Bengal and Hyderabad as Muslim areas and separate states. Bang-i-Islam would comprise of Bengal and Assam and Osmanistan of Hyderabad Deccan.

He visited Pakistan in 1948 but the atmosphere of the motherland did not suit him and so he returned to Cambridge. He died there on 11 February 1951.

It is the ever-shining contribution of Rahmat Ali that he coined the name of the Muslim state. He said that being nation, the Indian Muslims deserved a separate homeland. He gave the future lines to the Muslims considering Islamic thoughts universal and true in comparison with the contemporary isms. When the Lahore Resolution was passed, it was instantly described as Pakistan Resolution. It, the division of India, was the solution of Hindu-Muslim question but Rahmat Ali proposed this long before the Lahore Resolution.